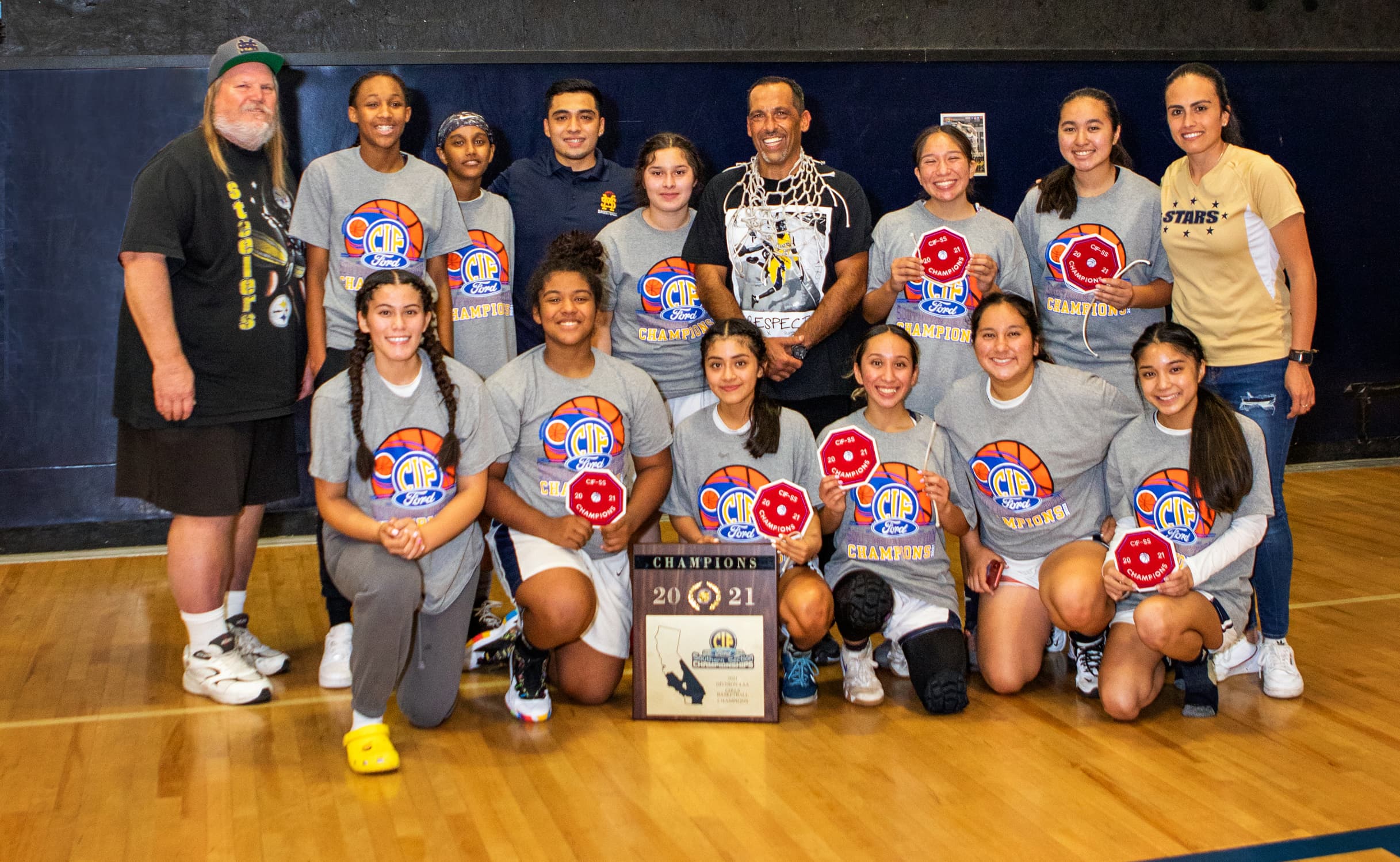 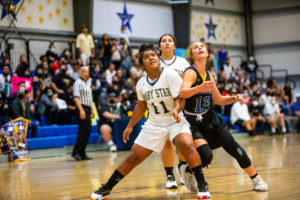 They were deemed too small — not just the team but the entire high school.

No one outside of this proud town of San Pedro even dared to think something like this would ever happen. By virtue of a hard-fought 54-50 victory over visiting Agoura of Agoura Hills, this girls basketball team of Stars accomplished something that no other team in the school’s 70-year history had ever done before: On Thursday, June 10, 2021, Mary Star of the Sea High School captured its first-ever CIF-Southern Section Division 4-AA sports championship.

Seven past sports teams at the high school tried but ended up as the runner-up. However, this year’s girls varsity basketball team was special, and they were determined to make this season count.

Mary Star (21-0 overall) had their skeptics from the start of the 2021 spring season, but the Stars rolled through the Santa Fe League, repeating as league champions, with little to no problem at all. In the postseason, the Taper Avenue-based Catholic high school, with an enrollment of exactly 500 students, defeated five schools with a combined enrollment of 8,654.

The Stars trailed most of the first half of the championship game, even falling behind 7-0 in the game’s opening minutes. Still, they never backed down against an Agoura team with no player smaller than 5’7” and stacked with height advantages in nearly every position. All it took was their calling card — that was also their rallying cry all season — to guide them, and that is defense. 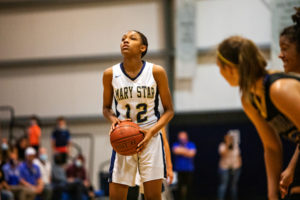 “We knew they had the advantages, but our energy on the defensive side is like [no] other,” Mary Star senior guard Cristina Camacho says. “Every single one of us played our hearts out on that court in which we were able to hold them off long enough.”

It wasn’t until the closing seconds of the second quarter when Mary Star finally grabbed its first lead on a driving layup by freshman guard Andrea Lopez, but the advantage was quickly erased when Agoura’s 6’2” senior forward Tyler Humphries made a layup of her own as time expired, giving the Chargers (16-5) a 27-26 lead which they took into the locker room.

Earlier in the second quarter, there was one frightening moment when Mary Star sophomore forward Bella Marconi was fouled hard and was on her back for almost two minutes. Marconi came back into the game right after a timeout and shot the free throws, hitting the second one.

“I was determined to come back and help my team,” says Marconi. “I couldn’t go out that easy. I needed to support and cheer [on] my team no matter what pain I was going through. I had to have their backs and fight through it.”

Thanks to their incredible defense and pressure shots down the stretch, Mary Star would take control in the third quarter, holding the Chargers to just six points. Freshman forward Madison Watts, the tallest player on the Stars at 5’7”, scored 10 of her game-high 24 points in the quarter, which ended with the Stars leading 43-33.

Winning the third quarter was especially important to Mary Star.

“We needed to make our run right there and show the other team we don’t take losing as an option,” Mary Star senior guard Isabella Serrano says. “Everything we had been practicing was time to be put to the test for us.” 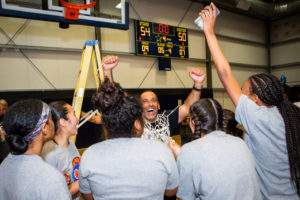 Especially in the closing minutes of the game. With 3:23 remaining and Agoura trailing 47-42, senior guard Malina Diaz had a chance to cut their deficit down to two but missed a three-pointer from the right wing. After Camacho corralled the rebound, Serrano (who scored eight points) hurriedly pushed the ball up court and found Lopez, who buried a three-pointer from right in front of the Stars’ bench to increase their edge back up to 50-42 with 3:12 to play. “It was a lot of pressure placed upon us, but I had to get over it and knock it down for the team,” says Lopez, who hit four three-pointers on the night and finished with 21 points.

Agoura eventually whittled their deficit down to 52-50 with a three-pointer by Humphries, who scored a team-high 17 points, but with 9.5 seconds left, they immediately fouled Watts, who calmly hit both ends of a 1-and-1 free throw situation. With no timeouts left, the Chargers were unable to overcome the Stars on this night, and the celebration, which was long overdue for Mary Star, was finally on when the clock hit triple zeroes.

The girls were shrouded in uncontainable joy; the crowd, especially on the Mary Star side, were doused in championship glory; and eight-year coach Victor Tuberosi ran into the crowd to celebrate with the Mary Star Gold Rush student section for a moment before coming back onto the court, shedding tears of joy. It was finally these Stars’ time to shine.

“My favorite coach was [the late] Jim Valvano, and I remember clearly when he won the [1983] national championship [with North Carolina State], he was running for joy,” Tuberosi says when asked of his motivation for his form of celebration. “I wanted to thank the student section for always believing in me and supporting the program. It was a sprint, and I didn’t know where I’d end up.” 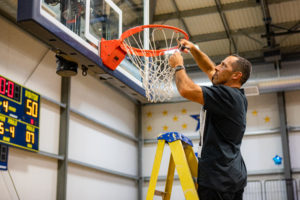 And no one could comprehend how far the Mary Star girls basketball program has come. When Tuberosi was named head coach before the 2013-2014 season, Mary Star was languishing and coming off a dismal 1-17 season and had lost 36 consecutive league games. By Tuberosi’s second season, Mary Star ended their league futility and made the CIF-SS Division 5A playoffs. In his fourth season, Mary Star advanced to the quarterfinals. In year five, it was the Stars’ first semifinal appearance. In year six, the Stars not only made it to the semifinals again, but they also reached the CIF Southern California Regionals and even won the first game.

Last year, the seventh year, saw Mary Star end a 36-year drought by becoming Santa Fe League champions, sharing it with two other schools. The hard work put in by the entire program, combined with the fast-paced style of coaching Tuberosi brought to the table, has finally culminated with a CIF-Southern Section title after defeating Temple City, La Quinta of Westminster, Calabasas, and Immaculate Heart of Los Angeles on the road to the championship game.

UPDATE: As this issue was going to press, the Stars continued their historic run in the CIF Southern California Regional Division 3AA playoffs, making it to the championship game against Rancho Bernardo (San Diego) on June 19 but losing by a score of 72-44. The Stars ended their amazing and historic season at 22-1. spt 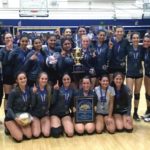 Phase III: The Cost of Beauty 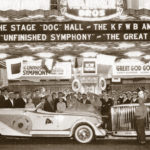