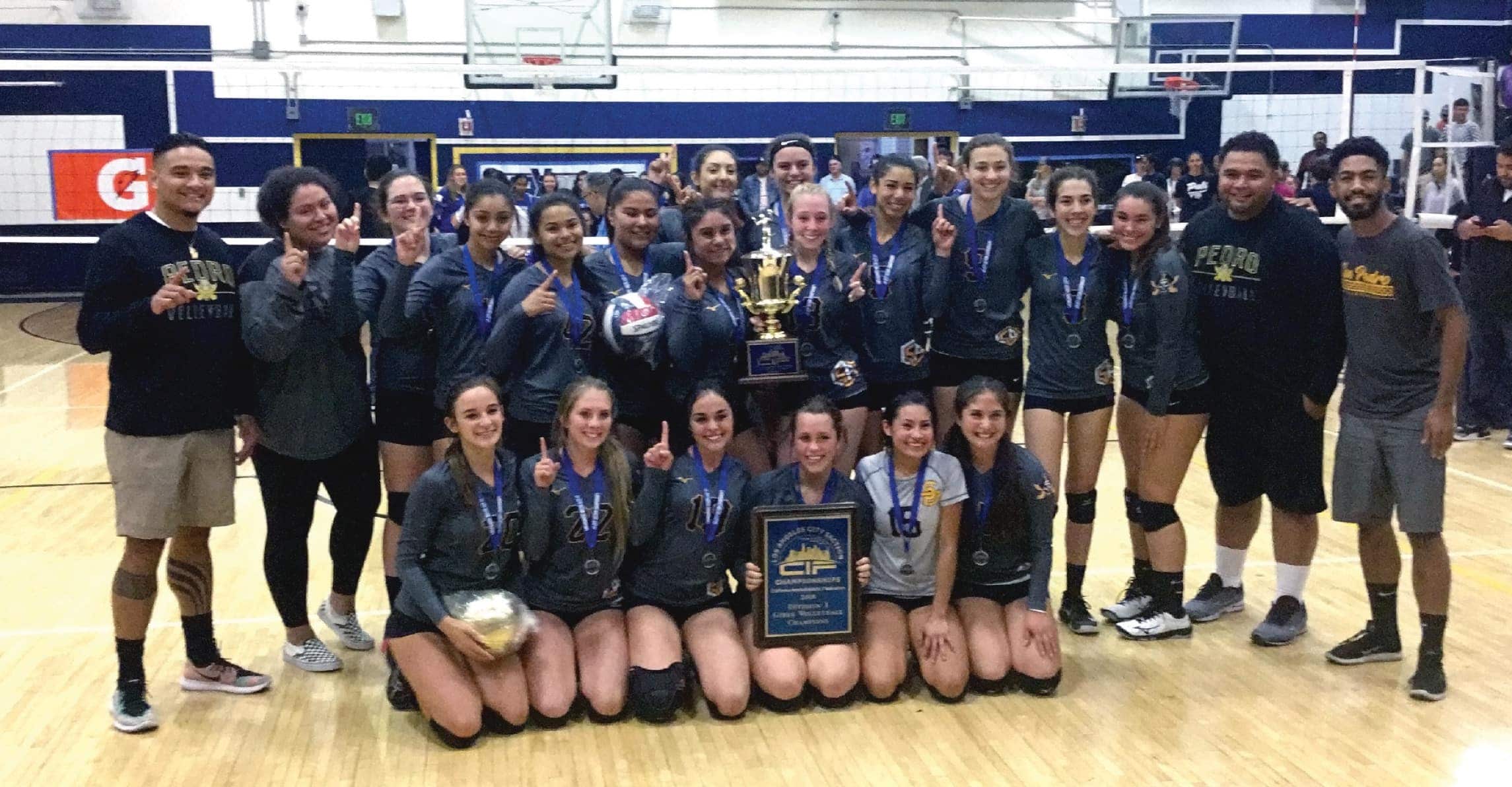 The 2018 San Pedro High School Girls Volleyball team weathered every storm that was cast upon them, and would counter by bringing about a storm of their own.

Before the season even began, the Pirates lost four players to grade cuts for the first ten weeks of the season. All four All-Marine League players from the previous 2017 season were also gone due to either graduation or transfer.

Promising junior outside hitter, Alexis Avitia, would miss the first two weeks of the season due to a ham-string injury suffered over the summer. During one week, another key player, senior outside hitter Sara Peterson, suffered a pinky injury, which kept her out of the first day of the Venice Tournament on September 7.

In spite of all those trials and tribulations, the hard work and perseverance of the Pirates would lead to their greatest reward on Saturday, November 3, in the form of a 25-16, 25-20, 15-25, 25-19 victory over El Camino Real of Woodland Hills in the Division 1 championship match at Birmingham High of Lake Balboa.

“I am so proud of my team,” said San Pedro sophomore setter Gabriella Ed-wards, who had 29 assists. “I honestly can’t believe we made it [here]. Winning this is like, the best feeling.”

El Camino Real was shorthanded on players due to three being out to injury, but the second-seeded Conquistadors were not short on heart, guts, and desire as they made San Pedro (26-5 overall) earn every point. Even so, the Pirates were not short on confidence that they would find a way to bring home the program’s first championship since 2005. “There were definitely some nerves there, but no doubts,” said San Pedro senior middle blocker, Lauren Sutrin. “I was very confident that we had what it took to finish them off, we just had to dig our feet in and play our game.”

San Pedro seemingly had a firm grip on the title with a 5-0 lead in the third set, but when El Camino Real stormed back to take a 16-10 lead, San Pedro would never recover from it and the Conquistadors (15-16) were right back in it. “Our mindset after that third set was extremely focused,” said San Pedro junior outside hitter, Isabella Emerson. “We immediately addressed what we had done wrong and the steps needed to fix our game. We saw this fourth set as a fresh start to finish the most important match of the year.”

Sure enough, the experienced Pi-rates would chip away at the youthful Conquistadors with every rally, taking a 19-17 lead after they called their final timeout. San Pedro would set up match point with two huge aces from senior libero Hanna Gurrola, a pivotal block from Sutrin, and two straight El Camino Real attack errors, but the Conquistadors would answer with a kill and service ace to make it 24-19, which prematurely delayed San Pedro’s celebration.

The final rally of the match itself proved San Pedro’s resourcefulness that they showed the entire season was legit, and there was little doubt that the Pirates would look to Sutrin to put on the finishing touches. El Camino Real denied Sutrin on two straight attempts, but when El Camino Real couldn’t get a clear attempt to spike one down and had to bump it over, Sutrin would finally seal the championship with the last, and greatest of her 11 kills off a dig attempt.

“That final point felt like forever! It was such a long rally,” Gurrola said with glee. “However, I knew Lauren had gone up for that final swing, that she would get that point and win (the title) for us. She hit it in the opposite way she was facing and I knew the title was ours.”

This championship win wasn’t the first title San Pedro would celebrate in 2018, considering they won their very own San Pedro Invitational Tournament back on September 15, also against El Camino Real, 25-13 in a one-set championship final, however this championship feels so much greater and sweeter for the Pirates.

“We definitely had the heart and talent in that final set to give us the championship we’ve been working all season for,” said Avitia, who finished with six kills, two aces, and 11 digs for San Pedro, who also got four kills and two blocks from Emerson, along with 22 digs and three aces from Gurrola.

Back-to-back clutch kills from Avitia would stake San Pedro to the opening set victory, while an ace from Edwards ended the second set which gave the Pirates the commanding two-game lead before the Conquistadors showed their toughness and made San Pedro work harder.

“Winning those first two sets was very crucial for us,” said Peterson, who had 10 kills and seven digs. “Because it pushed us to finish when we needed to for the win.”

On the road to the championship, the Pirates earned a bye in the first round before defeating Verdugo Hills of Tujunga three straight in the quarter-finals, and outlasting Bell in a four-set semifinal triumph.