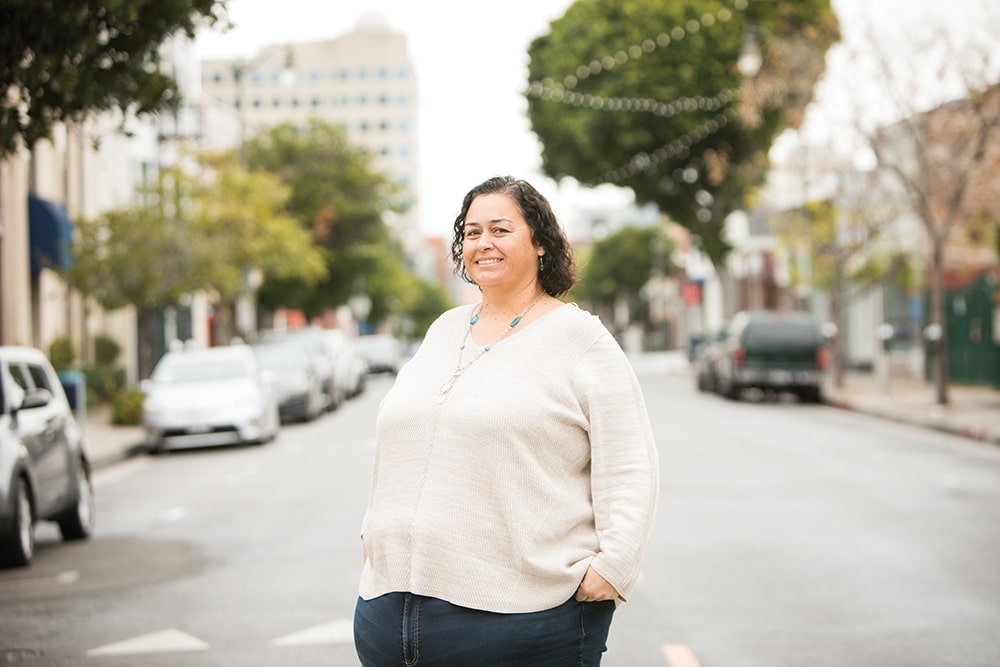 San Pedro Today: What inspired you to pursue such a lofty goal of walking every block in San Pedro? The simple answer is history. I was doing some research on the Warner Grand Theatre and got really interested in the history of San Pedro. I was shocked at how little I knew and figured that I probably wasn’t alone in my ignorance. There really should be a historical museum in San Pedro, a place where people can go to learn about the history of a town our families built. I want to make that dream a reality, but I didn’t feel worthy of the task when there were parts of town I had never seen with my own eyes. I needed street cred, and the only way to get it was to walk for it. – Angela Romero, San Pedro Today, June 2010.

The quote above is from a Q&A I did with Angela following the completion of her nine-month San Pedro: Block by Block journey, where she successfully walked every street in San Pedro and chronicled it online at spbxb.wordpress.com. (The site is still up.) It was her first appearance in the magazine; that was her first answer. Even from the beginning, she had her sights set on building a museum for San Pedro.

But before she could run with that idea, she had to walk.

My journey with Angela began a year before that first interview, in the summer of 2009. She asked me for advice about her Block by Block idea, and I told her to “Just start doing it,” which she did.

To be honest, I was skeptical at first. Who in their right mind would walk every street in San Pedro? Has she seen the hills here? But she did it. Not only did she finish, but through her blog and social media, she developed a devoted audience, many of whom stuck with her through the years.

Angela officially joined San Pedro Today as a columnist in June 2011, and from then on, we were a team. She was my “go-to.” Whenever I was stumped on something San Pedro-related, or I needed a story idea, or I needed information on a person, place, or event, she was the first person I’d reach out to. Nine times out of ten, she had the answer.

Eventually, she became everyone’s go-to, but she always reminded me that her devotion to the magazine came first, for which I will be forever grateful.

We had some of the most amazing conversations, not only about the future of San Pedro, but about life and the strange roles we’ve played (her a historian, me a magazine publisher), in the community and in each other’s lives. Even though we were both fourth generation San Pedrans, we always felt like outsiders in our hometown. A feeling that fueled both of our origin stories.

Angela was passionate about sharing her work with the public. It wasn’t just about the research, which she loved. She believed her work wasn’t finished until the community was able to hear about it. Angela was a firm believer that history needed to be constantly shared to keep it alive. She loved to share what she uncovered, whether it be in a column, on a walking tour, or during a presentation. To Angela, her work was all about community.

She was an ideas person and was constantly carving out thoughts in her notebook. One of her biggest complaints to me was that she was “full of good ideas,” but she could “never see them through.” It wasn’t uncommon to get texts from her in the middle of the night with some random thought on a column subject or a new San Pedro-related project. The ideas never stopped coming. Even through her cancer treatment, we were making plans to produce a San Pedro history podcast (we were able to record one test show) and work on an illustrated project. Sadly, our combined list of unfinished projects remains long.

Angela and I bonded over two things: our love of storytelling and our love for our hometown. For her, that love manifested itself into what has now become her legacy, the San Pedro Heritage Museum. From her very first appearance in these pages, her life’s work was to culminate with the opening of a museum devoted to the history and culture of San Pedro. “A place where people can go to learn about the history of a town our families built.”

When the board of directors of the San Pedro Heritage Museum meets soon, we will begin the work of putting her dream into action.

She was “a daughter of San Pedro,” a fact she was quick to remind me of in her final days. As I sat with her alone, less than a week before she passed, I asked what she hoped our community would take away from her life’s work. She paused, thought about it for a few seconds, and said, “I just want people to care [about San Pedro].”

For more than a decade, Angela used her wit and wisdom to remind us to care about where we came from and be aware of where we’re headed. Her last column, “Keep San Pedro Cozy” (Jan. 2022), was her way of bridging old and new San Pedro as our community prepares for the redevelopment of downtown and the waterfront.

“San Pedro is special because San Pedro is cozy,” she wrote. “It’s comfortable and neighborly. It gets under your skin in both good and frustrating ways, but you’ll never give up on it. San Pedro is a forever home — no matter where you go, you can always come back. This is how we bridge the two San Pedros; we work to keep San Pedro cozy.” spt

The Romero family has set up a GoFundMe page to assist with memorial costs. Any funds not used will be donated to the San Pedro Heritage Museum. Donate here: https://gofund.me/91570fdb