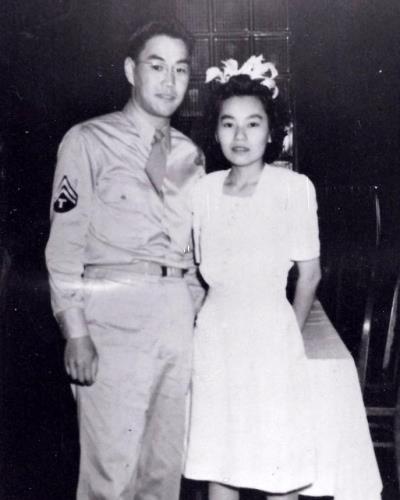 “Lord, now let your servants go in peace. Your word has been fulfilled.”

I’ve never chanted the plural “servants” at a graveside service before September 5 at Green Hills Memorial Park. That day required it because we buried Tadayoshi (Tad) and Harue (Anne) Sugiyama together, and both of them were servants of God. Both American citizens, Tad was born in San Francisco on May 18, 1921, and Anne in Stockton on April 2, 1922. According to the National Park Service, which has oversight of the Manzanar National Historic Site off of U.S. 395 on the way to Bishop, they were among “nearly 113,000 people of Japanese ancestry” living in California when America entered World War II. Even though “No person of Japanese ancestry living in the United States was ever convicted of any serious act of espionage or sabotage during the war,” on “February 19, 1942, President Franklin D. Roosevelt signed Executive Order No. 9066 empowering the U.S. Army to designate areas,” which would become known as relocation, internment, or concentration camps.*

The Sugiyama and Watanabe families were both relocated and incarcerated in the Gila River War Relocation Center 30 miles outside of Phoenix, Arizona. The combination of sun and desert made for a harsh environment for gardens or humans, but it was verdant enough for Anne Watanabe and Tad Sugiyama to meet and grow in love. Before the war ended, they attended Hamline University in St. Paul, Minnesota. After graduation, Anne became a cadet nurse and Tad enlisted in the Military Intelligence Service. Both served valiantly for a nation that was suspicious of them. They were married on July 25, 1945, a month before two atomic bombs were dropped in Japan, followed by the “instruments of surrender” on September 2, 1945.

After the war, the newlywed couple made their way west to Berkeley for Tad to finish his degree and Anne to work as a nurse. Finally, they settled in San Pedro. Anne worked at Harbor General as the head nurse in pediatrics and Tad opened and operated, with Anne’s administrative acumen, Sugiyama Dental lab for thirty years.

Japanese Lutheran theologian Kazoh Kitamori was ahead of his time when, in 1946, he wrote about the pain of God. Old religious views of God either protect God from pain or transcend him far above it. Kitamori said that the only way to have a robust view of the love of God is to have a robust view of the pain of God. Love involves pain. The open arms of God’s embrace are the same as the open arms of Jesus Christ crucified. The Sugiyamas experienced the sting of suspicion and the sacrifice of internment, but also the embracing love of a couple in Minneapolis named Dan and Ann Schoof. Unlike so many others, the Schoofs didn’t keep their suspicious distance. Their house and little Lutheran Church in the Twin Cities became a draw for many people of Japanese descent, including the Sugiyamas, who would also become devout believers. The Schoofs were so effective at reaching out to young Japanese that they became targets of an FBI investigation.**

The Schoofs and the Sugiyamas would reconnect in the South Bay when they helped plant Saint Thomas Lutheran in Gardena, a multi-cultural congregation. Before that, they were members and leaders of Christ Lutheran Church and School. Current Elder at Christ Lutheran, Bill Riekert, showed me a picture of Tad overseeing the building project, which houses today’s thriving Christ Lutheran School.

The climax of the Sugiyama’s story is almost unbelievably romantic. On August 21, 2019, Anne (97) passed away. Tad (98) passed away 10 hours later, without knowing his wife had died. I imagine they walked into God’s loving arms much like their wedding photo displayed at their service: embraced and embracing, realistic and hopeful, thankful for a full earthly life and anticipating eternal life.

I asked their daughters Judy and Karen if I could write this article. Judy said, “Please, if we forget the painful and unjust parts of their story, we are bound to repeat it.” Their memory is blessed. Lord, help us never forget. spt 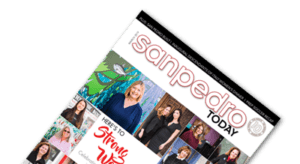