Skip to content
Features
Open image in lightbox
Members of the Alma Park Neighbors pose with members of the LAPD and LAFD at their Picnic in the Park event on June 12, 2022. (photo: Joshua Stecker) 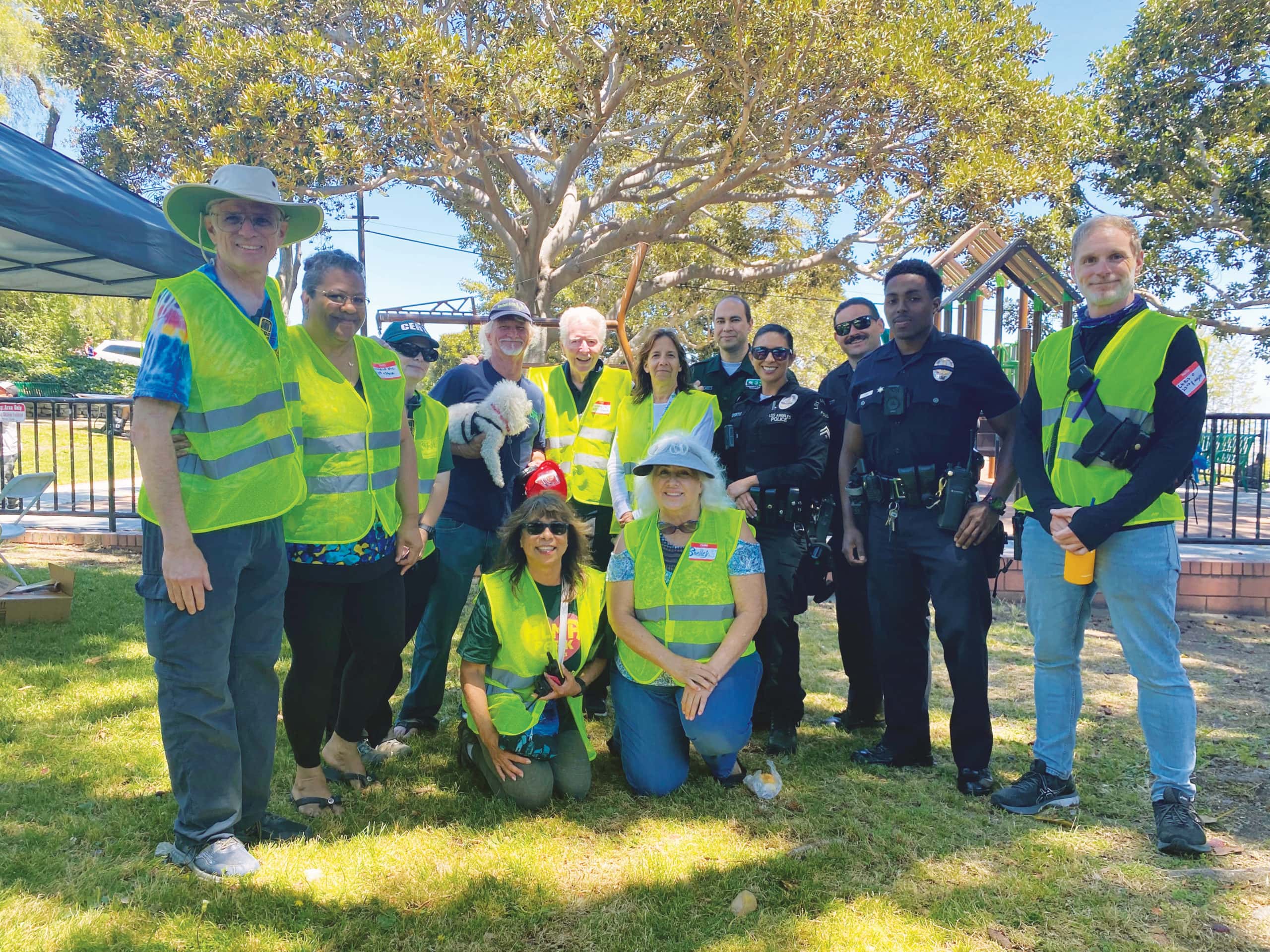 Nestled on a hillside behind Leland Street School is Alma Park, a small, unassuming plot of land bisected by 21st Street. Built in 1925 by George Peck for his daughter Alma, it’s been the backdrop of neighborhood life for decades — in the 1940s, Shirley Nizetich and her friend Dolores visited the park daily on their way home from Leland Street School to watch the polliwogs in the pond. In 1960, five-year-old Anita Nunez fell off the slide and broke her arm, and in 1977, Augie Bezmalinovich and his girlfriend visited the park for a cozy evening after their high school, Mary Star, won the big football game.

Today the pond is long gone, and the park remains hidden. But for the Alma Park Neighbors group, it’s hardly forgotten. “One of the things we’ve talked about are some of the transformations that could take place in this space,” says Chris O’Connell, who’s been a member for years. “I’d like to see us get an architect to draw out what this park could look like with better lights and maybe launch a fundraiser for that as well.” Carmenza Adams, one of the group’s newest members, envisions art in the park. “I think this park is very beautiful in its color and light,” she says, “and we want the shed to have a mural.”

The group was founded in 2015 by Pamela Gaume, who wanted to create something akin to a neighborhood watch but without a focus on crime. In addition to Gaume, it has five core members — Carmenza Adams, Pat Gonzales, Annalisa Little, Bradley Lyon, and Chris O’Connell — who see themselves as a democratic coalition of citizens dedicated to a common goal. “I always think of a table,” explains Adams, “they have four legs. We have Chris, who does the website, and Pam, who has the PR. We have Brad with the printing, and here [referring to Annalisa] miss Alma Community Emergency Squad (ACES), and here [gesturing to Pat] miss Pam’s assistant. We have the legs that make the table solid.”

Though their official mission is to create a clean, safe, and inclusive neighborhood, unofficially, it’s to revive the community spirit from their childhoods. Lyon, who grew up in Michigan, recalls the interconnectedness of his hometown and how he lost it when he moved to Los Angeles. “I grew up in a small town, and everybody knew everybody else there,” he says. “When I worked in Downtown Los Angeles, I would get up early in the morning to avoid the traffic and get home kind of late at night — I didn’t know anybody in San Pedro because all I knew was the Harbor Freeway. I want to be part of a neighborhood like where I grew up.” Little, who was raised in the Alma neighborhood, agrees. “Especially after the pandemic, it was almost like a community of strangers, and that’s not what a neighborhood is. As a kid, I’d ask, ‘Can I borrow a cup of sugar?’ Somehow that fell apart in this area, and we want that back, where you can go to your neighbor with a small favor.”

To accomplish their goals, the group meets weekly on Wednesdays and every first Saturday of the month. Their achievements include forming the Alma Community Emergency Squad (ACES), which trains residents in disaster preparedness and securing emergency prep bins, thanks in no small part to Gaume’s perseverance. She jumped through numerous hoops — including learning to write grant proposals — to get dumpster-sized bins that store disaster supplies for the neighborhood. Most recently, they held the Picnic in the Park event, bringing Augie, Anita, and dozens of others to Alma Park in June. The gathering was a success — Shirley Eubanks, who struggles to attend meetings due to their scheduled times, finally met the group. New residents Carly Myers and Maxwell Weinstein became formally acquainted with the neighborhood they’ve only recently called home. “If you move to a place like this, you’re looking for a sense of community,” says Myers, “and so having the ability to know your neighbors is important.”

But despite their successes, they face their fair share of challenges. “This park was built in 1925. All of these walls are 100 years old, and they’re getting vandalized, they’re getting dislodged,” says Gaume, referring to the park’s landscaping. “We’re thinking about forming [a nonprofit] so we can do fundraising for projects like this, but we don’t know how to do that.” According to Little, reaching everyone in a neighborhood of 3,000 is also a challenge, and retaining them is an even bigger task. “When I talk about it to somebody,” she says, “I get a lot of, ‘I’m glad you’re doing that, not me.’ But if it’s just us doing it, we’re not doing it.”

Nevertheless, the group is optimistic about the future and hopes to arrange a Christmas sing-a-long, a pet parade, and graffiti walks. Gonzales believes their work is paying off. “It seems to me that there’s a network developing where people will come, and they might talk to Chris or Pam or Annalisa or Carmenza. There seems to be a thing that’s happening.” O’Connell agrees. “We had our neighborhood meeting last Saturday. Pam and I wrapped it up, and then for 45 minutes, everyone who came stood around and talked to each other. And I said to myself, this is what we wanted to do. This is what we’re talking about.” spt