After saving the Warner Grand Theatre, Grand Vision Foundation embarked on its first major project, restoring the historic marquee and burned-out neon blade sign. Volunteer board members Bob Clark and Stephanie Seitz pulled it all together quickly and smoothly. On September 20, 1996, in front of a crowd of almost 5,000, Grand Vision relit the theater’s marquee at their Light Up the Night celebration.

“That night was amazing,” remembers another early board member, Noramae Munster. “At the time, I had an advertising agency on 7th Street, and not much was going on downtown. Light Up the Night made people feel like things were about to happen. It was electrifying.” But how would Grand Vision maintain that energy?

The Grand Vision board tried tapping big L.A. foundations for restoration support, and when that didn’t happen, they tried raising money by producing concerts at the theater. “We were a little before our time on that,” says one of the founders, Alan Johnson.

Not long before, a newcomer had arrived in town, Liz Schindler. By trade, she was a city planner but also had a background in art. She took note of the historic theater across from her office in the Brown Bros. Building and wondered what it looked like inside. Finally, she got in. Liz had recently met Alan Johnson, and he took her to see a concert there by the LA Phil led by Esa-Pekka Salonen. The house was full, the music was transcendent, and the theater — gorgeous.

“I saw the posters and banners promoting the concert, and the audience was dressed to the nines. I thought San Pedro must be a cultural mecca.” In 1998, she joined Grand Vision’s fledgling board of directors. But the organization was low on funds, and the executive director quit. The group needed someone who knew the ropes of city government, project management, and historic preservation. Liz was a match. 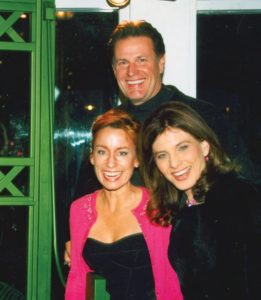 She remembers being at the Warner Grand when San Pedro’s “first citizen,” John Olguin, came in with a group of elementary school students. He asked her to give them a tour of the theater. “Their eyes lit up when I pointed out the decor,” says Liz. “Even back then, when the theater was in pretty bad shape, it was still awe-inspiring. At that point, I knew we had to do something big, for the theater, for the whole community, and especially for the area’s kids.” That experience shaped what Grand Vision was to become under Liz’s leadership.

Grand Vision explored its next steps. The theater’s state of disrepair prevented producers from mounting shows there. One improvement came when the City of Los Angeles announced it would install a new heating and air conditioning system. Around that time, the Grand Vision board determined that they would fundraise to restore the sprung seats and replace the old hemp rope stage rigging held together by duct tape and clothespins.

Theater Manager Lee Sweet was in complete agreement. He recalls the first day he visited the theater and sized up its physical condition. “I was standing at the top of one of the aisles with my arms folded, looking back and forth like, ‘What is this?’ The seats had that old-timey hadn’t-been-taken-care-of look. The cushions were all pancaked. I was struck by the color palette.”

Grand Vision hired a San Francisco-based theater consultant to advise on the tasks ahead. Together, they pored over plans and projected costs. In the best-case scenario, they needed at least half a million dollars to do the work. The number was daunting. If they started a big push to raise funds, how long would it take? Camilla Townsend, a local educator and Port of L.A. harbor commissioner, heard about Grand Vision’s challenge. She presented the case to the Port, and her perseverance paid off. The Port of L.A. committed $300,000 in seed money. Grand Vision was more than halfway there.

On June 11, 2004, Grand Vision launched the Save Your Seat campaign, with a reception under the theater’s marquee. They announced that people could adopt theater seats and be thanked with a personalized brass nameplate affixed to a seat. Then-City Councilwoman, now County Supervisor Janice Hahn adopted the first seats. Save Your Seat brought the community together.

Local families, artists, businesses, and organizations joined a common cause that salvaged a beloved icon and reinforced the vision that the theater could become a quality performing arts venue. 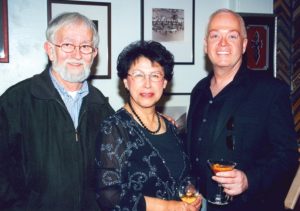 “Save Your Seat’s success was a wonderful surprise,” Liz recollects. By this point in the story, Liz had married co-Grand Visionary, Alan Johnson. A San Pedro romance! “Alan and some of the other early Grand Vision volunteers — Irene Mendoza, Leslie Valdez, Kathy Cadien, Shirley Kalland, Annette Ciketic and her Esteemed Bakers, who held bake sales in the lobby — they let me know that the San Pedro community would support the project. And they sold many seats themselves.”

Irene Mendoza, a founding member of Grand Vision, originally came to the group as Councilman Svorinich’s City liaison. “I remember the enthusiasm that came with Save Your Seat,” she recalls. “With the council office, we knew that the theater could be a catalyst for revitalizing the town — and with Grand Vision, we were putting that vision into action. Memories of the theater inspired so many people to adopt seats.”

For the 75th anniversary, Grand Vision presented an onstage revue of local and professional dancers and musicians and an original score played by the Golden State Pops Orchestra to celebrate the theater’s many decades. The event was followed by a rowdy reception at the brand new “Grand Vision Event Space” at 434 W. 6th Street.

‘SAVE YOUR SEAT’ GOES INTO ACTION
Grand Vision had completed the fundraising campaign, but that was just the first half of the job. The next part was to implement the projects they had promised to the community. The organization had a contract with the City of Los Angeles to oversee the restoration with Liz at the helm. “But I couldn’t have done it without Fred Allen.”

As the campaign progressed, a new player had emerged. Fred, a resident of San Pedro, was a veteran of professional theater production. “I toured with Glen Campbell, David Bowie, Patrick Stewart, and others,” Fred explains. “Then I came back to Pedro and settled down. I wanted to know who was behind this campaign for the theater, and I met Liz. She welcomed my help, and we have worked very well together ever since.”

Fred kept an eye on the stage rigging project while a seat specialist was brought in to determine the original velvet upholstery pattern. The theater seats were shipped out to be overhauled, and Liz focused on an unexpected addition to the project — aisle lighting. Because almost a million dollars was raised, the final project included not only the seats and stage rigging but also a brand-new P.A./cinema sound system, restored projectors, some repainting of the auditorium, and new carpeting.

Grand Vision celebrated the campaign’s success in 2007 with a champagne brunch fundraiser aboard the historic California Zephyr Silver Bullet, a restored passenger train on show at the foot of 6th Street. This event capped a campaign that had exceeded expectations.

OPENING THE DOORS FOR FUTURE PRODUCTIONS
Save Your Seat’s ambitious restoration project was complete. Theater doors reopened with a Golden State Pops Orchestra concert in the fall of 2006. The San Pedro City Ballet followed the Pops with their classic, The Nutcracker. The theater was back.

Tending to the theater’s physical well-being has always been a hallmark of Grand Vision’s work. But it’s only part of the help the organization provides. Since the City of Los Angeles started operating the theater, it’s been run as a rental house. That means each presenter must handle their own marketing, ticket sales, and event production.

To help newcomers, Grand Vision reaches out with marketing and technical support. The organization also packages up the Warner Grand’s calendar of rental events into “seasons” and promotes them in printed mailings, e-newsletters, and on their website.

After the Save Your Seat campaign, the calendar began to fill in earnest with event producers of all types. In the years since that campaign, Grand Vision has continued to make the theater more user-friendly with ongoing restoration projects. 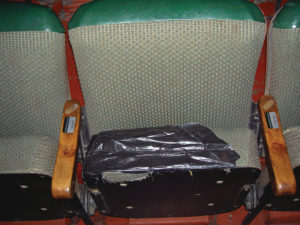 A damaged seat prior to restoration. (photo: Taso Papadakis)

In 2008, they refreshed the faded marble on the ticket booth, replaced the decrepit main curtain, and installed a stage extension, making the orchestra pit usable for the first time in decades. An angel, Steve Shultz, an owner of Shultz Steel Company, offered invaluable support for this project, and his help will not be forgotten.

In 2009-11, when a section of the mezzanine lobby ceiling began to fall off, Grand Vision repaired the plaster and restored the original design. In 2011, the historic lobby benches were repaired by Alan Johnson. In 2012, the exterior’s chevron patterned tile was repaired.

The organization took the lead in 2014 to refurbish the flood-damaged lower lobby, repairing an original decorative mural at the foot of the stairs, painting, installing vintage light fixtures over the restroom doors, and adding a historical photo display and Warner Bros. movie posters.

A public building always needs a lot of attention. Throughout the decades, Grand Vision has addressed and continued to make both grand and minor repairs, from painting walls and fixing stage lights to buying a 45,000-lumen digital projector in 2015, so the theater could show films in a state-of-the-art format.

LOVE THE LOBBY
Grand Vision recently launched a new campaign, Love the Lobby, to reveal and restore the original artwork on the ceiling and walls throughout the Warner Grand’s main lobby and more. Councilman Joe Buscaino provided a matching grant of $50,000 toward the estimated $350,000 needed for the project. To date, $100,000 has been raised. The project’s scope has expanded to include urgent projects in all three of the theater’s lobbies. Grand Vision is again asking community members to contribute by adopting seats to help bring back the theater’s opening day luster.

The first Love the Lobby project is the recently completed refurbishment of the three lower lobby chandeliers. These large, elegant art deco fixtures were in terrible condition, and many parts were broken or missing. They are now reinstalled. “They look fantastic! We wish people could come in to see them right away,” says longtime volunteer and current Grand Vision board member Lucrecia Jacobson.

LOOKING TO THE FUTURE
Over the years, Grand Vision has grown. With their roots planted firmly at the Warner Grand, they also operate the Grand Annex, an intimate music hall three doors down, and provide music education for San Pedro and Wilmington elementary school students through their extensive Meet the Music program. 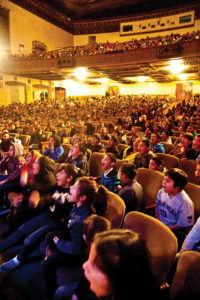 Children enjoying the new seats during a performance by the LA Opera. (photo: Taso Papadakis)

With the Save Your Seat campaign, Grand Vision met its first mission, which was to bring the theater back to regular use by the community. Over time, Grand Vision has become a well-respected community arts organization with a wider audience and purpose. Now, with Love the Lobby, the main lobby will regain its dazzle for all who visit in the near future and for the next generations.

Schindler-Johnson says, “The good news is that we are here for the long haul, and we are strong enough to weather rough times like the pandemic and economic crisis we’re in right now. When the storm clears, we’ll redouble our restoration efforts at the theater, start up the concerts at the Grand Annex and the Warner Grand, and get back to the classrooms in-person to teach music for the kids of the Harbor area. We can’t wait for that to happen!” WGT