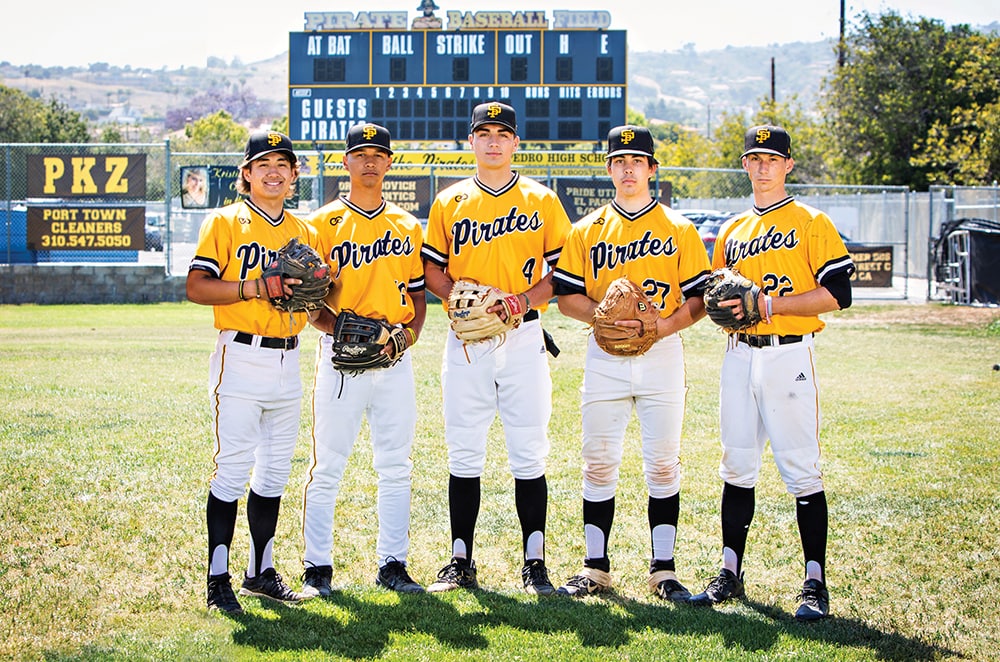 They grew up together as kids on the ballfield and are entering adulthood as champions.

For five San Pedro High School baseball players — Mikey Brucelas, Jake Harper, Dylan Kordic, Cain Lusic, and Dominic Porter — winning this year’s CIF-LACS Open Division championship was the culmination of years of hard work, perseverance, and a strong friendship that began more than a decade ago when all five joined the San Pedro Junior Pirates travel baseball club in February 2010. They were just seven or eight years old at the time.

“They were really committed kids with a real passion for the game,” remembers Christopher Lusic, the Junior Pirate’s head coach and Cain’s uncle. “The travel ball club was a way to keep them playing all year round, training them so that when they got to high school, they had a legit chance to win a championship and move on to the next level.”

Between 2010 and 2016, the Junior Pirates averaged 20 tournaments a year, playing nine months with a three-month break. The team would collect 25 championships during that six-year run, which ended when the five boys entered junior high school.

“They were little kids, and they had the mentality that this was something they wanted to do, and they went all in and never slowed down,” says Coach Lusic. 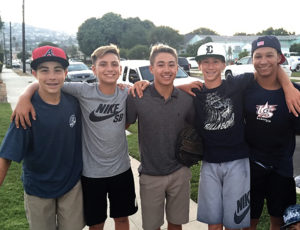 All that time playing, traveling, and going to high school together created a near impenetrable bond between the five best friends, who’ve seen each other practically every day for more than a decade. They’ve experienced many highs, and a few lows, but nothing could prepare them for the fairytale ending of their high school baseball careers by winning the CIF-LACS Open Division championship.

“I see them as my brothers,” says Dominic Porter, who hit the go-ahead home run that put SPHS on top to win the championship. “We’re never going to forget winning the whole thing and playing together since we were kids. No matter if I move away, they will always be my family.”

“I know I wouldn’t have achieved anything if it wasn’t for these guys,” adds Dylan Kordic, who was one of the winners of the L.A. City Section 2020-21 Scholar-Athlete of the Year award. “We just won the biggest goal of our lives on our home field. Now we’re leaving each other for college. It just blows my mind how fast it’s all happened.”

With diplomas from SPHS in hand, all are college-bound. Porter, Kordic, and Brucelas will attend Golden West College next year, while Harper heads to El Camino Community College and Lusic attends Orange Coast College. All plan on continuing to play baseball while pursuing other studies.

“We had the same goal all our lives, and we finally did it,” says Cain Lusic, who plans on studying business. “Now it’s time to grow up and be on our own. It’s exciting. Hopefully, we just keep working and end up playing with or against each other.” (Full disclosure: Christopher and Cain Lusic are my cousins.)

“It’s crazy knowing we’re not going to be together like we’ve always been,” adds Brucelas, who plans to major in sports medicine. “It’s going to be a lot different. It hasn’t really hit me yet, to be honest.”

For all of them, this rite of passage from high school to college is bittersweet. While embarking on their new collegiate life is exciting, the adjustment to not having each other around as much anymore is still sinking in.

“It’s kind of sad now that we’ll have different schedules,” admits Porter. “I know we’ll hang out, but we won’t see each other as much as we used to. We won’t have what we had in high school.”

He adds, “I can see myself playing with any of them again along the way. We all know we’re good enough to play at the next level. So, there’s excitement, too.”

“I know all these guys are going to be in my wedding,” laughs Harper, who has an eye on sports management in the future. “We know that even if we fight, at the end of the day, we all have each other’s backs.” spt