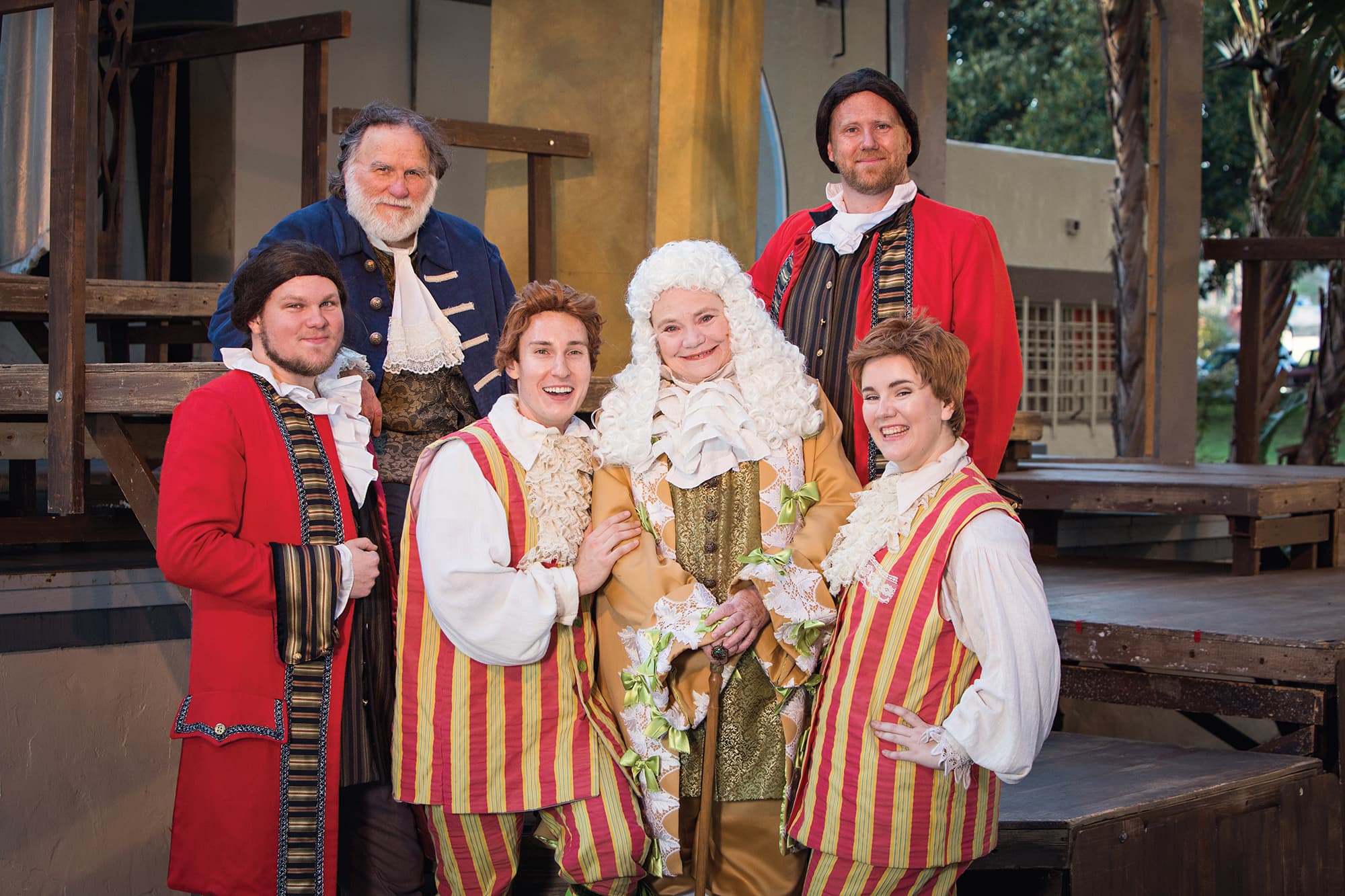 A Shakespearean SummerFor more than two decades, Shakespeare by the Sea has been entertaining audiences every summer at Point Fermin Park

It’s an hour before showtime on a brisk July evening at Point Fermin Park, and the benches are already full.

Theatre-goers of every age and variety are spread out amongst the seats and grass, most enjoying a meal and beverage as they watch the actors build the set on the band shell stage that will eventually become the backdrop for this evening’s performance of The Comedy of Errors. (Henry V would be performed the following night.)

The actors get into it as well, playing around in costume and in character as they put together set pieces in front of the audience. They’re halfway through this year’s run, so they’ve got the build out down to a science. They’ll eventually put up and tear down the set more than a hundred times before the run is over, since they need to do it every night they perform. The audience eats it up, clapping and cheering the cast on as they set the stage for what’s to come.

This year’s productions of The Comedy of Errors, directed by James Rice, and Henry V, directed by Stephanie Coltrin, marks Shakespeare by the Sea’s 22nd season. For more than two decades, the company has been entertaining capacity crowds across Southern California with free performances of the Bard’s work. It’s the only Shakespeare company that travels to more than 20 communities on the west coast with its programming. It’s also the only annual free theatrical experience that serves the entire South Bay, Los Angeles, and parts of Orange and Ventura Counties.

“The size of the organization has really grown from having just me, a director, a theater designer, a few staff members, and some actors that show up and do the show,” says Lisa Coffi, founder and producing artistic director of Shakespeare by the Sea. “Now I have staff members that are with me all year-round. There’s a lot more people involved. This season, we have [up to] 16 actors, seven volunteers, and four staff members every night, just for Shakespeare.”

FROM THESIS TO THEATRE
The San Pedro summer tradition launched in 1998 as Coffi’s college thesis project, which would earn her an MSA in theater management from Cal State Long Beach. Their first show, The Comedy of Errors (the first of three times they’ve mounted the play), saw more than 3,000 people attend the nine performances during a three-week run at Point Fermin Park. That year, they were able to pull it off on a meager budget of $20,000. Today, Shakespeare by the Sea performs two plays every summer in repertory on a 10-week schedule – 42 performances in 23 locations – with a budget topping $317,000.

“It’s an uncommonly long schedule for plays,” says Coffi. “Most theaters don’t [run productions] that long, unless you’re on Broadway. So, a 10-week run in Los Angeles is unheard of.”

In addition to that, Coffi also co-founded Little Fish Theatre in January 2002 in downtown San Pedro. The company, which produces contemporary plays year-round, is also in production concurrently with SBTS.

“We also have Little Fish, which needs its volunteers and staff. So right now, we have three shows running, the two Shakespeare shows and The Nerd at Little Fish.” (The Nerd closes July 28; Lonesome West opens August 22.)

Shakespeare by the Sea’s current schedule has them crisscrossing all over Southern California, starting and ending at their home base at Point Fermin Park. By the time the 10-week run is over, the cast and crew (with set, sound and lights) will have traveled as far north as Encino and as far south as Aliso Viejo, with stops in Manhattan Beach, Cerritos, Beverly Hills, and more than a dozen other cities in between.

SUMMER YEAR-ROUND
What started off as a thesis project turned into a year-round nonprofit organization very quickly.

“I originally I wanted to do a show at Point Fermin Park where I could put up a fence and charge tickets, but the City of Los Angeles and our city councilman at the time, wanted me to do it for free,” recalls Coffi. “So, they helped shepherd me through the Department of Cultural Affairs and put some cash together to help get it off the ground.”

Planning for the next season starts before the current season is over. According to Coffi, next season’s plays are usually announced towards the end of the current run. “So people get excited for next year,” she says. Even venues for the following year are booked in September and October.

“I have a 2020 calendar that I carry around with me because a lot of the tour cities, if I see my contact there, they just go, ‘Same time, same place, next year?’ I say, ‘Yep.’ You just pencil it in, and you’re done.”

With the directors hired in December, production officially starts in January with work on scenic designs and the editing of the scripts. An uncut Shakespeare play can run as long as four hours, so every year, the company must cut down the text in order to keep the runtime reasonable.

“Shakespeare’s plays were meant for an audience who had a lot more time on their hands,” says Coltrin, who’s also the associate festival producer. “We’re under a severe time limit of two hours, including intermission. So, for me, the biggest challenge is cutting it down to our time limit, but we stay true to [Shakespeare’s] intent and still give the audience the full experience of the play. It hurts me to say that because I wouldn’t like to cut any of it, but we have to.”

Auditions for the chosen plays happen in the spring, with the rehearsal process starting by late March.

It’s a daunting task for any actor to undertake. Not only do they have to learn their blocking and lines, but the actors are also required to set up and take down the set every night, which doesn’t necessarily happen in today’s modern theatre.

“It’s incredibly challenging,” says Jonathan Fisher, who plays Henry V in Henry V and Antipholus of Ephesus in The Comedy of Errors. “The time and effort that goes into these productions is amazing. [SBTS] is upfront with how much of a commitment these shows require. The traveling aspect adds a different dimension to it.”

IT TAKES A VILLAGE
While the performances are free to the public, free theatre is not free to produce. Fundraising is a huge aspect of running a nonprofit theatre company, and Coffi and the rest of her staff are constantly thinking of ways to raise more funds.

“I’m always writing letters, trying to come up with the next thing,” says Coffi. “What items can I sell? What events can we do? Those types of things.”

In addition to donating money, during each performance patrons can purchase raffle tickets for unique prizes and purchase SBTS merchandise. Patrons can also purchase a Golden Ticket ($150), which guarantees reserved seating for a party up to six for a performance. They can also purchase a Bard’s Box ($65/person) for opening and closing nights, which includes reserved seating with blankets, a seat cushion, choice of meal, and bottomless beverages. There are also employer matching donation programs and corporate partnership opportunities available.

“By being free to the public, one of the only ways that we can expand and improve is by having more money,” explains Coffi.

POINT FERMIN MAGIC
It’s not unusual to see large crowds forming as early as two hours before a Shakespeare by the Sea performance at Point Fermin Park. For many, these shows have become a summer family tradition.

When asked what’s the most rewarding aspect of putting on these shows year after year, Coffi is quick to reply. “It’s the people, hearing their stories.” she says. “Seeing these people that I only see once a year, maybe twice if they come out to both shows. I get to follow along with them and their stories. How it’s affecting them. That’s what really gets my goat.”

“There’s a big family aspect to all of this, and our family extends to our audience,” adds Coltrin. “It takes a specific kind of artist to commit to something like this. We just get the best people who are committed and passionate, and they become family. My best friends all came from Shakespeare by the Sea.”

The crowds continue to grow year after year, which is a testament to the quality of work they produce onstage. Coffi also attributes the company’s longevity to the words of the playwright himself that they celebrate each summer.

“It’s something magical,” she says. “I think it’s the element of the outdoors, this old language that travels through time, and the fact that you are seeing something that is so old that has had 300 years’ worth of generations watching it. So, somehow it ties you back to the beginnings of the theatre. It’s just something that’s really unique and exciting.”

For Coltrin, the beauty of Shakespeare by the Sea’s home at Point Fermin Park just adds to the charm.

“Point Fermin is magic,” she says. “There was one year during King John where one of the characters has a big speech about how the world is turned upside down and there are these mystical things scaring everyone, but they can’t figure out what’s happening. Exactly at the moment that he started saying that, the fog rolled in off the ocean and completely engulfed the park to the point where you couldn’t see anyone onstage. And just as he finished the speech, the fog went away. It was like something weird happened in the universe, and this fog just needed to help that show right now. It rolled in on cue and rolled out on cue. It was amazing. It was magical.” spt

Don’t miss the Grand Finale performances of Henry V on Friday, August 16, and The Comedy of Errors on Saturday, August 17, both at 8 p.m. at Point Fermin Park. For more information on Shakespeare by the Sea, visit shakespearebythesea.org.