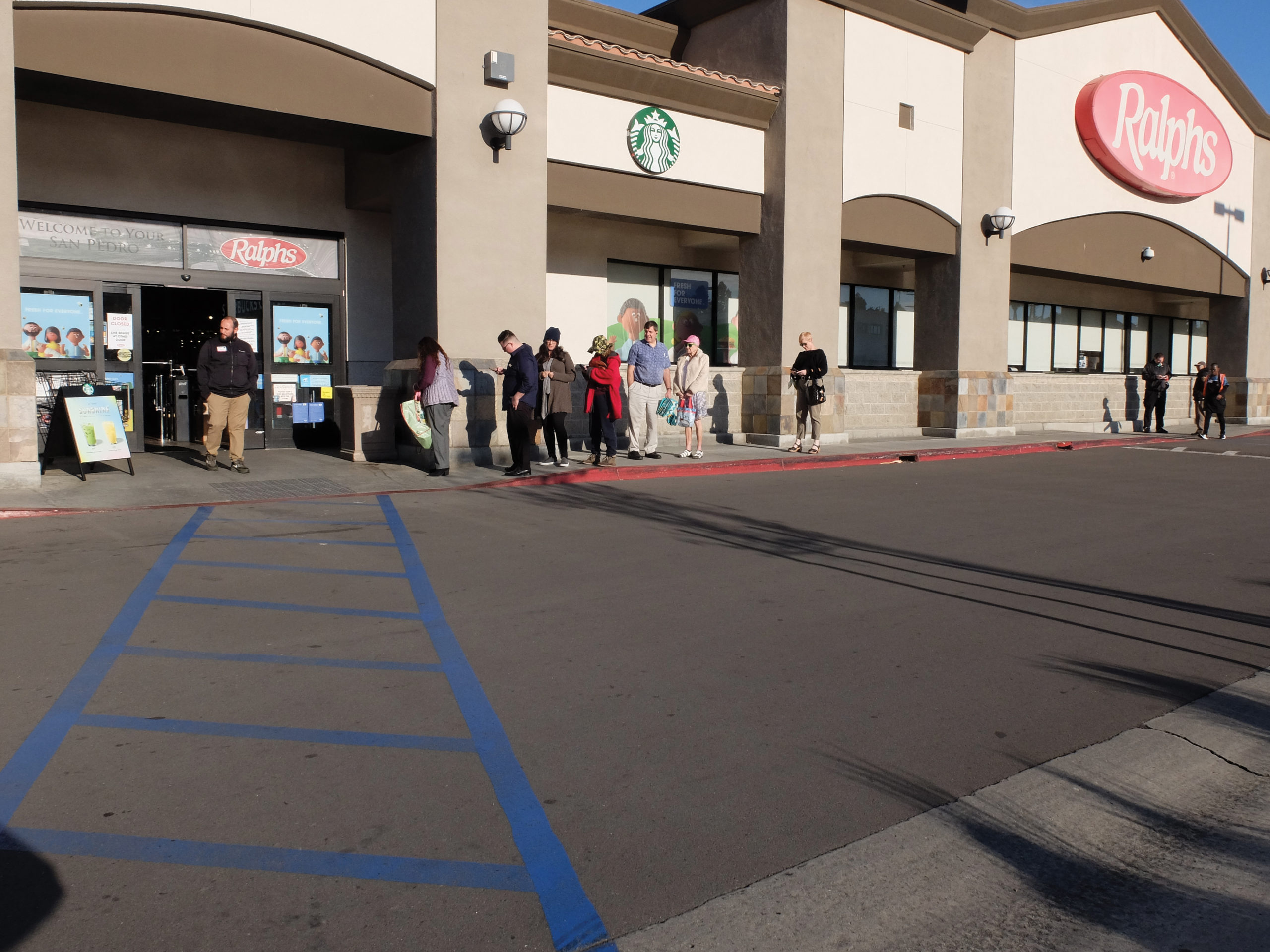 Our Community Responds: San Pedro in the Time of Corona

Editor’s note: With news of the coronavirus pandemic being updated on a daily basis, some information in this story may be outdated by the time you read it. Please pay attention to local, state, and federal advisories on how to help prevent the spread of the coronavirus (COVID-19).

I realized things were different when I saw grocery shoppers wearing face masks and latex gloves.

It wasn’t just one or two; there were at least a dozen of them, all scattered inside Vons grocery store on 25th and Western on Sunday, March 15, two days after the federal government declared the coronavirus pandemic a national emergency.

In San Pedro and Rancho Palos Verdes, there was a mad rush at grocery stores all across town that weekend. Long lines were spotted outside all the neighborhood grocery stores. Bread, water, dairy, and paper products were the first to sell out, even though there were no signs of a food shortage. Grocery stores just couldn’t keep up with the demand, as customers cleared the shelves before they had a chance to restock. People were nervous, and the initial panic was understandable. It’s safe to say that none of us have experienced anything like this before. 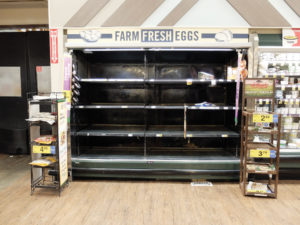 “This is stupid,” one older lady quipped to me as we made eye contact in the soup aisle. Even though she was in the most at-risk group to suffer a severe illness from contracting the coronavirus – adults 65 and older – she wasn’t alone in her sentiment. Her blasé attitude was almost as contagious as the virus itself during those first few days.

We saw examples of that attitude everywhere. Utah Jazz basketball player Rudy Gobert jokingly touched reporters’ microphones at a news conference shortly before testing positive for the virus on March 11, prompting the NBA to suspend the rest of its season. In local social media groups, many people were initially skeptical about the seriousness of the pandemic, while others believed it warranted a much more serious response from both the public and federal government.

No one wanted to believe this was going to become the story of the century, but then the NHL decided to suspend their season the day after the NBA. Then concerts and special events started being postponed or canceled across the country. Then Tom Hanks and Rita Wilson announced that they both had contracted the coronavirus while in Australia and were being quarantined. By the end of that week, the United States was facing a full-fledged public health crisis, pushing President Donald Trump to declare a national emergency, on Friday, March 13, of all days.

At that time, there were only 1,701 confirmed cases in the U.S. and 40 deaths. Nine days after the declaration, there were more than 35,000 reported cases in the U.S., including 471 deaths. And because there aren’t yet enough coronavirus tests to meet demand at press time, by the time you read this, those statistics will surely get worse.

WORLD TURNS UPSIDE DOWN
Around the world, countries were starting to take proactive measures to protect their citizens. The U.S. Department of State advised U.S. citizens to avoid all international travel. The stock market suffered its worst week in 11 years, dropping to its lowest level since December 2, 2016. Countries like China, where the coronavirus reportedly originated, and Italy were suffering tremendous loss of life, with the beloved European country recording more than 6,000 deaths at press time, the most of any country. There hasn’t been a pandemic this large and all-encompassing since the 1918 Influenza Pandemic (“Spanish flu”), which, according to experts, killed an estimated 50-100 million people worldwide. 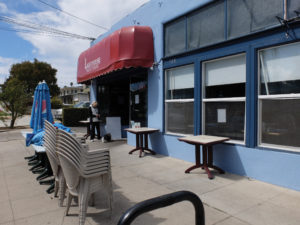 With dine-in currently banned during the “Safer at Home” emergency order, restaurants like Lighthouse Deli & Cafe were forced to either close or change to take-out/delivery service only. (photo: Angela Romero, San Pedro Heritage Museum)

As the public began to digest the seriousness of the coronavirus, federal, state, and local officials rushed to figure out ways to protect Americans. While New York City continues to experience the brunt of infections (at press time, New York state has nearly half of all U.S. coronavirus cases at more than 15,000), L.A. officials were scrambling to figure out their next steps to “stop the spread.”

On Monday, March 15, life as we knew it took a dramatic turn when L.A. Mayor Eric Garcetti ordered all bars and nightclubs that did not serve food to temporarily close, and restaurants were ordered to stop dine-in service and switch to take-out and delivery only. Live performance venues, movie theaters, bowling alleys, and arcades were also temporarily closed. In San Pedro, our restaurant community responded swiftly.

“Curbside pick-up!” and “Free delivery!” messages were plastered all over the social media accounts of nearly every restaurant in town. San Pedrans began to rally, ordering out and posting pictures of their meals to help spread the word. Restaurants that didn’t regularly sell to-go entrees had a harder time shifting gears than those that did. The mandate forced many restaurants to completely change their business model overnight, laying off staff while stocking up on to-go supplies. To entice customers, some restaurants were offering special deals, like free dessert or half-off bottles of wine. California’s Department of Alcoholic Beverage Control (ABC) even went so far as to ease its rules around alcohol, allowing restaurants to sell alcohol and cocktails for pick-up or delivery throughout the state (only with the purchase of food).

Folks from Wellington Signs & Graphics produced signage for local restaurants to hang outside their storefronts to encourage take-out and curbside pick-up. Some restaurant owners, like Mona Sutton from the Omelette & Waffle Shop, Nima Karimi from Sebastian’s Mediterranean Cuisine, and John Bagakis from Big Nick’s Pizza posted videos online thanking the San Pedro community for their support.

The Los Angeles Unified School District closed campuses on Monday, March 16, in an effort to prevent the spread of the virus, forcing teachers and parents to switch to online education. Grab & Go Food Centers were set up at schools all across the district, continuing to provide meals to all students who need them during the temporary school closure, which is scheduled to end May 1. San Pedro’s Grab & Go is currently at Dana Middle School (1501 S. Cabrillo Ave.) weekdays from 7 a.m. to 11 a.m., where each child can take home two nutritious meals.

As the first week of the pandemic progressed, coronavirus cases around the world, especially in the United States, began to increase rapidly. On Tuesday, March 17, Los Angeles County reported 144 cases, with one in San Pedro. Three days later, the count more than doubled at 292 cases with two deaths, prompting Mayor Garcetti to issue a “Safer at Home” emergency order, calling on residents of the City of Los Angeles “to stay in their residences and limit all activities outside of their homes beyond what is absolutely necessary for essential tasks.” California Governor Gavin Newsom then issued a statewide “Stay at Home” order shortly after. As of press time, the “Safer at Home” emergency order is set to end on April 19, but it’s subject to extension.

The “Safer at Home” order, prompting all nonessential businesses to temporarily close, effectively shut down the City’s economic engine. Life as we knew it was about to change even more dramatically.

A NEW LEXICON
By the end of the first week of the pandemic, phrases like “social distancing” (keeping six feet away from individuals while outside the house), “flatten the curve” (the idea of slowing a virus’ spread so that fewer people need to seek treatment at the same time), and “stop the spread” had become permanent fixtures in our vernacular. 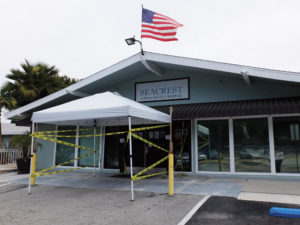 As the pandemic reached closer to home, San Pedro residents started to organize. Shannon Ross, a Coastal San Pedro Neighborhood Council board member, started a Facebook group called Pedro Updates and Resources- COVID-19, where residents are sharing news, information, and comments on how the pandemic is affecting us locally. Members started reporting which stores were stocked on what items. “Has anyone been to Costco the past couple of days? Have they had meat and produce?” asked one member of the group, with another responding, “Just went to Costco yesterday, they had meat, no chicken, and plenty of produce, pretty well stocked on everything else… no [toilet paper] tho [sic].”

Unfortunately, even with the constant rise in cases in L.A. County and across the world, Mayor Garcetti’s “Safer at Home” measures were slow to catch on. On the first weekend of the emergency order, city officials were receiving reports of crowds at parks, beaches, and hiking trails, including popular local walking spots like Paseo del Mar, causing the mayor to announce on Sunday night, March 22, that he was shutting down parking at city beaches and closing sports recreation facilities in L.A. County during the pandemic. It was clear that while the “Safer at Home” orders were necessary, the weather was so nice most of the weekend that many people had the same idea to visit popular walking trails and beaches, creating large crowds that prohibited social distancing behavior.

“This weekend we saw too many people packing beaches, trails, and parks. So we are closing sports and recreation at @LACityParks and closing parking at city beaches,” Garcetti wrote in a Twitter post. “That doesn’t mean gather elsewhere. This is serious. Stay home and save lives.”

WHAT’S NEXT?
This brings us to today. As of press time, the “Safer at Home” emergency order is still in effect; restaurants are still take-out and delivery only; gyms, movie theaters, and large gathering venues are still shut down; and all nonessential retail stores are closed. San Pedrans are (hopefully) staying at home as much as possible, following social distancing guidelines when outside, and wondering what the future holds. 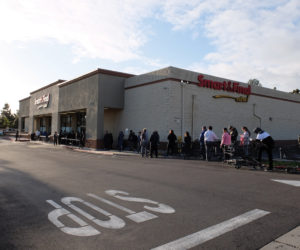 This pandemic could not have happened at a worse time for San Pedro. Prior to this crisis, the town was experiencing an incredible development boom, with numerous homes and mixed-use buildings in various stages of construction. Groundbreaking for the San Pedro Public Market was slated for this spring. First Thursdays, business mixers, live performances, prep sports, and many other events have vanished from the calendar. So many things are up in the air. For many, the future is one big question mark.

But on the other hand, we’re seeing the San Pedro community come together in ways many have never seen before. Neighbors are connecting with neighbors. Families are enjoying quality time together at home. People are exploring new forms of creativity. We’re seeing an incredible outpouring of love for our small business owners, restaurants, health care community, and grocery store workers. People are lighting their Christmas lights and hanging American flags in front of their homes in a show of solidarity. Ironically, this pandemic has caused many of us to pause and take stock in what’s truly important in our lives.

In the week following the “Safer at Home” order, I came across a quote from an unknown author that read, “The worst thing that can come out of this is that we don’t change.” I couldn’t agree more. The other side of this is on the horizon. This uncertainty, while tough to deal with now, is temporary. The road back to normalcy will be rough, but we’ll get there. There’s comfort in knowing that we’re all in this together. If there is a silver lining to any of this, it’s that we’re going to come out of this a stronger, more connected community. Of that, you can be certain. spt