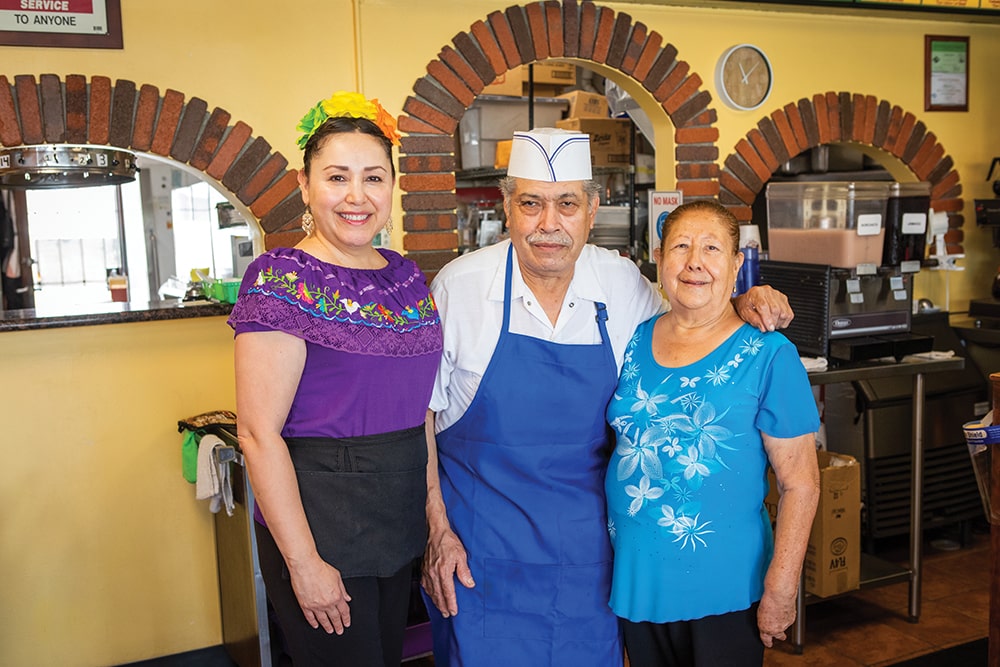 At 72 years old, the soft-spoken chef and owner of The Original Las Brisas Mexican Food on the corner of Gaffey and Channel streets can still be found almost every day working in the kitchen of his family-owned business that he started nearly four decades ago. It’s a routine that he hasn’t been able to break, or maybe doesn’t want to.

“My father is the heart and soul of Las Brisas,” says Hilary Mejia, De Haro’s daughter and the restaurant’s business manager, who stepped in to help run the family business in 2010 after a stint in the corporate world.

Last year was rough for the De Haro family. The COVID-19 pandemic did a number on many small, family-run restaurants, and The Original Las Brisas was no exception. They were fortunate to make it through 2020, even though the restaurant now operates with a skeleton crew of just De Haro, his wife Paula, and Mejia. It’s a real family affair in every sense of the word.

“Yesterday, we had a blessed day for a Tuesday,” says Mejia, 48, as she unlocks the front door before the day’s lunch rush. “We ran out of carne asada and salsa!”

Walking into The Original Las Brisas today, one of the first things you’ll notice is a wall plastered with certificates of recognition, mostly from local politicians acknowledging the restaurant’s longevity and contribution to the community. It’s a wall Mejia is intensely proud of because, for her, it legitimizes all the hard work she’s seen her parents put in to keep their little “hole in the wall,” as she describes it, operating. They celebrate their 39th year in business in September, making it one of the oldest family-run restaurants currently operating in San Pedro.

“If I am privileged to arrive at their ages and I do one-third of what my parents have accomplished, then I think I have fulfilled my purpose,” says Mejia.

AL PASTOR PRIDE
The list of restaurants that San Pedro has seen come and go the past 40 years is a long one. And as picky as this town can be, for a restaurant to last nearly four decades, it must say something about the quality of the food and service. In a town chockful of excellent Mexican restaurants, The Original Las Brisas has been able to set itself apart, mostly on the back of De Haro’s recipes and signature sauces.

“We always tell our customers that we have been told that our al pastor [thinly sliced pieces of marinated pork] is the best in the South Bay, with its 14 secret ingredients in the marinade, but we let you be the judge of it,” says Mejia, who, among other things, is also the family spokesperson, as the De Haros primarily speak Spanish. “We’ve had five generations of families enjoy our al pastor, which is crazy to think about.”

Those al pastor claims were backed up by popular Los Angeles Spanish-language radio host Argelia Atilano, from El Show de Omar y Argelia on KLVE 107.5 FM. Atilano, who grew up in San Pedro, namechecked The Original Las Brisas on air in 2019 as having the best taco al pastor in L.A. The mention helped boost the restaurant’s profile, but more importantly for Mejia, it helped cement her father’s culinary legacy.

“She said, ‘It’s not just how it’s prepared, but it’s the heart that’s behind it from the cook,’ and I know she was talking about my dad,” remembers Mejia. (Click here for the video of Atilano mentioning the restaurant.) 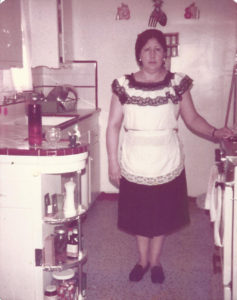 On any given day, you’ll see De Haro, usually in his favorite New York Yankees baseball cap and blue apron, manning the kitchen, waiting for the next order to come in, as Paula, 77, the restaurant’s “original waitress,” sits at her small table in the corner, greeting guests and helping her daughter tend to customers.

“My mother is the heartbeat and glue that keeps on giving,” says Mejia, who does a little bit of everything, acting as server, kitchen assistant, business manager, marketer, and caretaker for her parents at any given point during the day.

Even though he’s not as limber as he used to be and health issues are slowing him down, De Haro continues to prep, cook, and manage his kitchen the same way he always had since opening the first Las Brisas in 1982.

THE AMERICAN DREAM
De Haro started his restaurant career at the age of 14 in a restaurant in Mexico City. Born in Los Haro, Jerez, Zacatecas, Mexico, he later immigrated to the United States in the early 1970s with his wife and quickly got hired at the popular East Los Angeles Mexican restaurant, Largo’s Mitote, in 1972.

“That’s where he really discovered his passion for cooking,” says Mejia, the De Haro’s only offspring, who was born soon after.

A casual conversation with a family relative (“My cousin’s husband on my mom’s side,” explains Mejia) about starting their own restaurant in San Pedro would turn into a partnership that would launch the first Las Brisas in a small building on Pacific Avenue in 1982. They chose September 16, Mexican Independence Day, as their opening day.

“When we first settled in San Pedro, we lived very briefly on 1st and Centre, then 24th and Alma, where I briefly attended Leland Elementary,” remembers Mejia, who graduated from San Pedro High School in 1991. “We moved out of San Pedro in 1989 when my parents purchased their first home in Carson, where they currently live.”

In 1992, De Haro and his original partner, Roberto Campos, decided to open a second Las Brisas restaurant in the nondescript strip mall on the corner of Channel and Gaffey streets, next to where Big Nick’s Pizza is today.

According to De Haro, after two decades together, the two decided to dissolve their partnership in 2003. Unsure of how to split things up since the original business was formed on a handshake, they decided to simply split the two restaurants, with Campos keeping the first store on Pacific Avenue and De Haro keeping the one on the corner of Gaffey and Channel.

There was only one problem: They both kept the name Las Brisas.

“No one thought of changing the names when we dissolved the partnership because the brand had been established for 20 years,” explains De Haro, as translated through his daughter.

“Their legal advice wasn’t the best. They should’ve flipped a coin for the name,” adds Mejia.

WHAT’S IN A NAME?
Any conversation with Mejia about the family business usually includes a discussion about the restaurant’s name. She makes it clear to anyone within earshot that her family’s store has no affiliation with Las Brisas #1, the Mexican restaurant that currently resides in the original Pacific Avenue location.

According to Mejia, even though that location has gone through multiple owners since her cousin’s husband’s family sold it in the early 2010s, the new owners never bothered to change the name aside from the addition of “#1,” which was the result of a costly lawsuit the family had with another previous owner. That decision also resulted in the De Haros officially changing their store’s name to The Original Las Brisas Mexican Food in 2014.

“There was an incident in 2012 where the Pacific Avenue location [under a previous owner] was temporarily closed down by the Health Department,” remembers Mejia. “At the same time, I noticed that our business had dropped by nearly 50 percent.”

She was unaware of the other place’s closure until a customer told her weeks later that the news appeared in the Daily Breeze.

“The customer said, ‘I wonder how many other people thought it was you,’” remembers Mejia. “That’s when I began my campaign to make it known that the original founding family of Las Brisas restaurant was on Gaffey and Channel.” 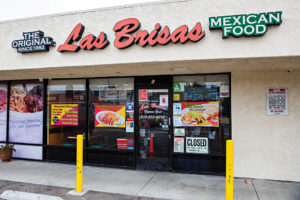 Mejia says the name confusion, with both stores less than a mile from each other, has been frustrating to deal with.

“I wasn’t going to be the one to rebrand,” she says. “My father is Las Brisas. Since my family has had no affiliation with that store since 2003, there’s no reason the Pacific Avenue location should still be using [the name]. We get people coming in every day thinking we’re still involved there, even after nearly 20 years.”

According to Mejia, the family is currently continuing their legal fight with the Pacific Avenue location’s name. Multiple attempts to contact the current owner of Las Brisas #1 for comment were unsuccessful.

SECURING A LEGACY
These days, Mejia seems to be running a three-ring circus. In addition to being the restaurant’s only daily server, handling business affairs, and dealing with the ever-changing COVID-19 dining protocols (and protecting her parents in the process), in her downtime, she’s been making moves to secure her father’s legacy. Tops on her list: bottling and selling her father’s five “secret” sauces.

It’s still in the research phase, but other local restaurants, like San Pedro Fish Market, have had some success in the retail space. With the popularity of sauces soaring, she’s a firm believer that The Original Las Brisas’ five secret sauces would be a hit on store shelves.

“My father’s ranchero sauce is amazing! You cannot find it in any other Mexican restaurant in Southern California,” says Mejia.

Right now, though, what the De Haro family really needs is help in the form of additional kitchen and serving staff. Running the restaurant short-staffed has begun to take its toll, with the store recently shifting to a five-day work week (Tues-Sat) so Mejia and her parents can rest.

De Haro’s health has also become an issue. While the 72-year-old can still hold his own in the kitchen, it’s evident the family needs to find someone that he can take under his wing to keep his legacy and his recipes alive for a new generation.

“My number one priority is keeping my parents healthy,” says Mejia. “They can retire, but what keeps seniors healthy and alive is being active. But we need the help. We’d like to take a few days off and have trustworthy employees that can run the business so we don’t have to close. But to do that, you need good, quality, loyal people. It’s very hard to find them, but we’re looking!”

When Mejia started working for her parents in 2010, she was unaware of the extent of her family’s connection to the San Pedro community. She’s met customers who are like family and have frequented The Original Las Brisas for years, including some who have been coming since the beginning.

“My father taught me that you need to cook with your heart,” says Mejia. “We’ve had five generations of San Pedrans enjoy my father’s cooking and my mother’s hospitality. And we’ve also endured many adversities and challenges as a family business. But it’s our passion, dedication, perseverance, and love for our customers that continue to drive us.”

She adds, “I need a team that can help carry my father’s legacy. I want to make it to 50 years and more.” spt