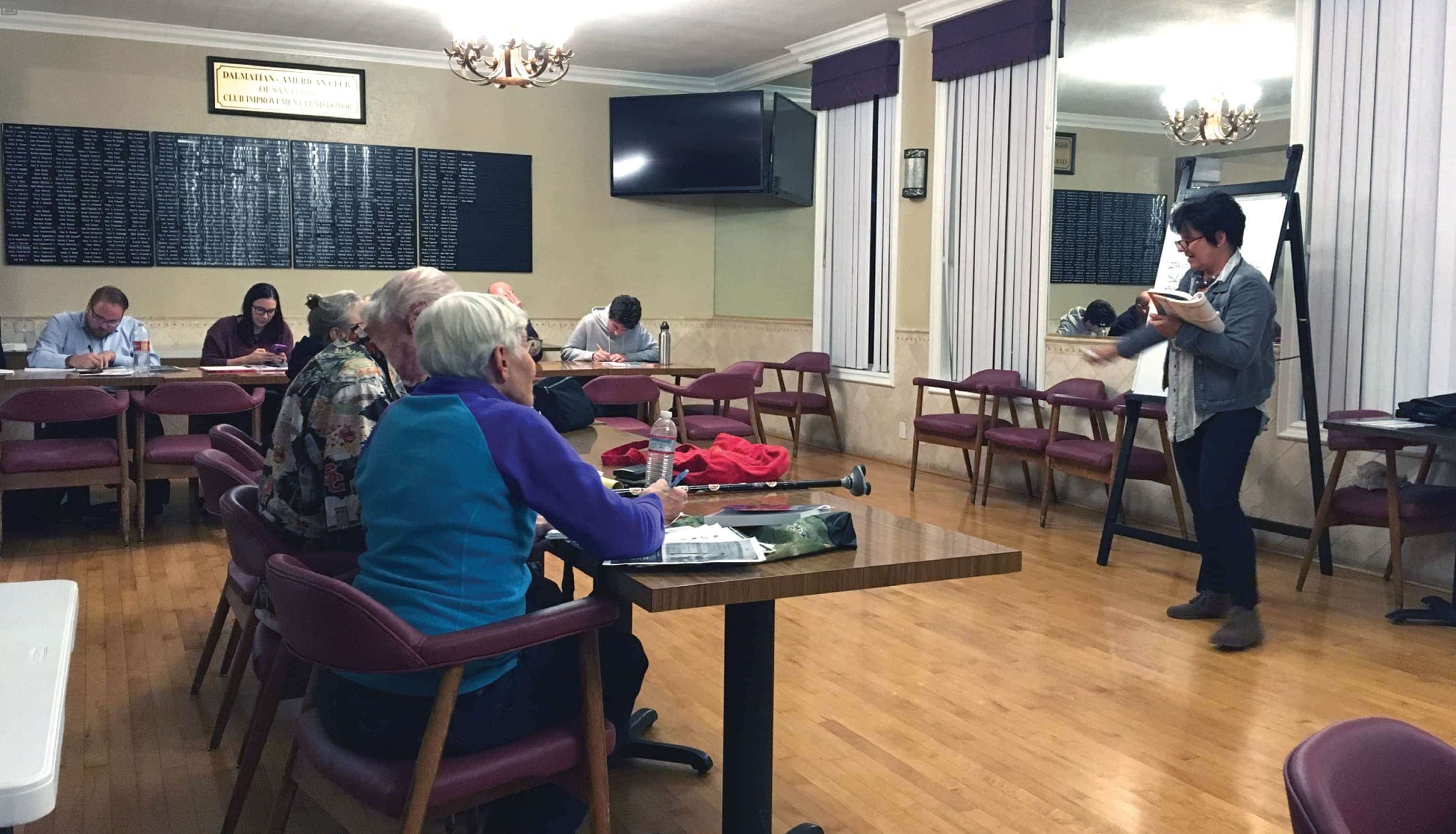 I was a very odd child. I went through so many phases growing up. My favorite was the Halloween I dressed up as a “beatnik” and wore a striped shirt and black beret. But most of the phases centered around different cultures and languages. In junior high, I’d watch Japanese TV (not the fun stuff, just whatever was on Channel 18). I swore I was destined to marry an Irishman, but then I discovered Jewish boys and Yiddish in high school. I especially had four different language phrase books on my shelf at any given time. I even tried to teach myself Latin from a 1930s textbook I found at a yard sale. I loved them all, but I never got serious with any one language or culture, especially not my own.

I’m still that weird, little kid with the same interests, but the cool part is that now, learning is a big part of my job. Ever since I decided to devote myself to San Pedro history and culture, I’ve dreamed of learning Spanish, Italian, and Croatian. Not only because it can come in handy, but because it’s the best way to really immerse yourself in a culture. That’s why I jumped at the chance to learn Croatian at the Dalmatian-American Club.

Wednesdays at 6:30 p.m., my fellow classmates and I meet in the bar of the Dalmatian-American Club. Our instructor is Nada Matulich, a native of Croatia who moved here 13 years ago. The class is a great mix of people, from middle school-aged kids, to young professionals, to retirees, and even one ornery octogenarian. I’d say most students are Croatian and have some kind of familiarity with the language. Before this class, my Croatian vocabulary consisted of only a few words. But I didn’t feel so bad when we all learned the harsh reality that most Croatians in San Pedro do not speak proper Croatian, they speak a dialect native to their island, which has a strong Italian influence. I think someone once used the analogy that the dialect spoken here is equivalent to that of a country bumpkin in the States.

On the first day of class, we learned the Croatian alphabet, which contains four more characters than its English counterpart. My favorite letters in the alphabet are the ones that have accent marks that look like little angry eyebrows floating above them; Č pronounced with a hard “-ch,” Dž pronounced like a hard “j,” Š pronounced like “–sh,” and Ž pronounced like the “z” in Zsa Zsa Gabor.

What I appreciate the most about the Croatian alphabet is: 1.) It’s not Cyrillic, and 2.) All the letters never change the way they sound. Because of this fact, each letter is like a roadmap on how to pronounce the words. I have a great sense of direction and with a little added effort, I’m actually pretty good (for a novice) at pronunciation. I even wowed the class with my ability to say djevojčica on the first try. Despite my early successes, I still feel a little bit like Eliza Doolittle with the marbles in her mouth when it comes to the new combinations of sounds. For example, let’s take the word Monday. In Croatian, it’s Ponedjeljak. Phonetically, you’d say it like “po-ned-yell-yak.” Before one class, I sat in the car and said ponedjeljak over and over until it felt less foreign in my mouth.

When we have to read dialogue exercises, my friend Stacy laughs at me because she’s the Croatian and is having more trouble than I am. I try to remind her that I might sound great, but I have no clue what I’m saying. Because Croatian isn’t based in Latin, like Spanish, English, and Italian, it’s hard to wrap your mind around the language. We all keep trying to make connections or apply English type rules to Croatian and failing miserably. Let’s take colors, for example. Orange in Croatian is narančasta and purple is ljubičasta. We asked Nada if -časta meant anything on its own, kind of like a colorful suffix. Nada answered simply, “No.” That was frustrating, but it was followed by an a-ha moment that was my equivalent of Eliza Doolittle’s “The Rain in Spain.” Green in Croatian is zelena. I used to watch this TV show called Once Upon a Time, based very loosely on fairy tales. The Wicked Witch of the West was a character who had green skin and her name was Zelena. I squealed with delight knowing her name reflected her skin tone!

I’ve thoroughly enjoyed my Croatian classes. Besides the language, Nada tells us about life in Croatia, like the fact that they eat a lot of soup, or fun trivia like neckties are a Croatian invention. If you’re interested in learning Croatian, contact the Dalmatian-American Club to sign up for their next session in early 2019. Vidimo se!