Skip to content
Fitness, Health & Wellness
Open image in lightbox
“How mild can a cigarette be?”: This striking ad by Camel cigarettes was published in the New England Journal of Medicine on April 28, 1949. Click to enlarge. 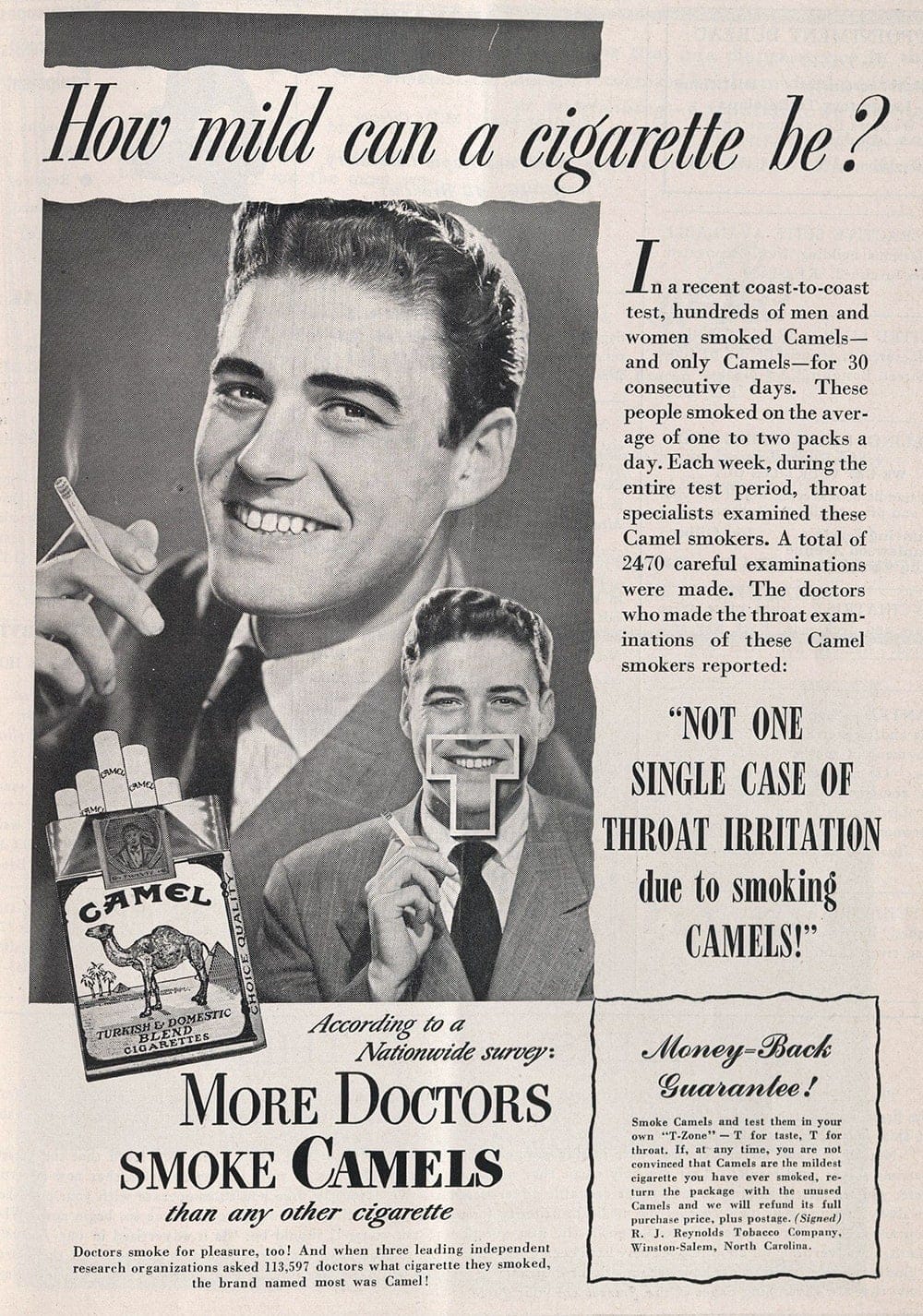 In 1946, under increasing pressure and bad press about the link between lung cancer and smoking, Camel brand cigarettes launched an advertising campaign with the aforementioned slogan to offset some of the attention away from the mounting evidence.

Mad Men-era ad agencies knew then if they could get a couple of whitecoats puffing on their cancer sticks, the combination of half-truths, celebrity endorsement, and statistical gymnastics might confuse the conversation enough to distort the writing on the wall. 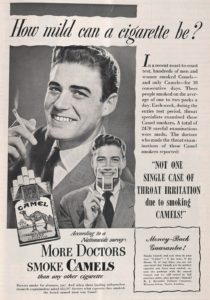 “How mild can a cigarette be?”: This striking ad by Camel cigarettes was published in the New England Journal of Medicine on April 28, 1949.

But there are only so many skeletons you can fit in a closet before the pile of bodies becomes too difficult to hide. The idea of misinformation has become a hot topic as of late. The Molotov cocktail of social media, partisan politics, and the pandemic has made the dissemination of misinformation easy and wildly profitable, and so it is part of the national conversation. But anyone not born yesterday knows misinformation is far from some new weapon used on the masses. Dealing in deliberately false or misleading claims for profit is as old as time itself.

The example of doctors smoking Camels is one of many throughout history. And if there’s one industry where misinformation thrives, it’s the health and fitness industry. And since the conversation around misinformation is on the public consciousness as of late, I figured I’d highlight some of the most enduring examples I see.

Carbs are evil. Diet is nuanced. People are nuanced. To say one ingredient (carbs, meat, etc.) is the sole reason entire populations are in poor health takes the onus of responsibility off the individual and puts it on the evil entity. These messages are usually propagated through viral, emotionally charged documentaries. The truth isn’t as sexy or provocative as we might wish it to be: Most foods have a place in most people’s diet. The question is more, what is the “optimum dose” a given food should play in your diet given your background and goals?

Cardio makes you skinny, and weights make you bulky. Cycling, running, and bodyweight-cardio workouts are all great ingredients for a well-rounded fitness routine, but the idea that to lose weight you need to do hour upon hour of sweat-drenched workouts is incorrect. While they are great calorie-burns, cardio by itself is actually quite ineffective for weight loss long term. The truth is that the majority of weight loss is going to come from tweaking calorie consumption and will be aided, not carried, by physical activity. Weights will help you maintain muscle, and a healthy, revving metabolism and cardio can help burn excess calories.

Cleanse/detox/teas/supplements are the missing ingredient. It seems like each week some old acquaintance is messaging me on Facebook to tell me about a “revolutionary” new business opportunity. It’s usually some powder or potion that promises to reboot/reset/rewire your metabolism to magically do what it couldn’t do before. It’s then discovered that it’s the same turd rolled in glitter — short-term, extreme calorie deprivation coupled with an overhyped supplement. What you must understand about supplements is that they supplement. They don’t substitute. If you don’t have the foundations in place, they won’t do accomplish anything significant.

Here’s the thing about misinformation. We tend to fall for what we wish to be true. That’s when we get bamboozled. It’s way easier to pay $49.95 and have all my body fat melt away than address the deep-rooted habits I have to unlearn. This is why in the quest for health and fitness, often the harder, more inconvenient route is the right choice.

I heard this recently, “The truth will set you free, but first, it will piss you off.” This bit of wisdom is sorely missed these days. Truth is often a bitter pill because the truth often requires us to change, and that’s not comfortable. Instead, we are encouraged to enter virtual echo chambers that encourage us to stay put. So in the pursuit of your own health and fitness, I encourage you to take an honest look at the beliefs you hold. Ask yourself: Is it possible you’ve been misinformed? If so, no big deal. Shake it off and correct course. spt