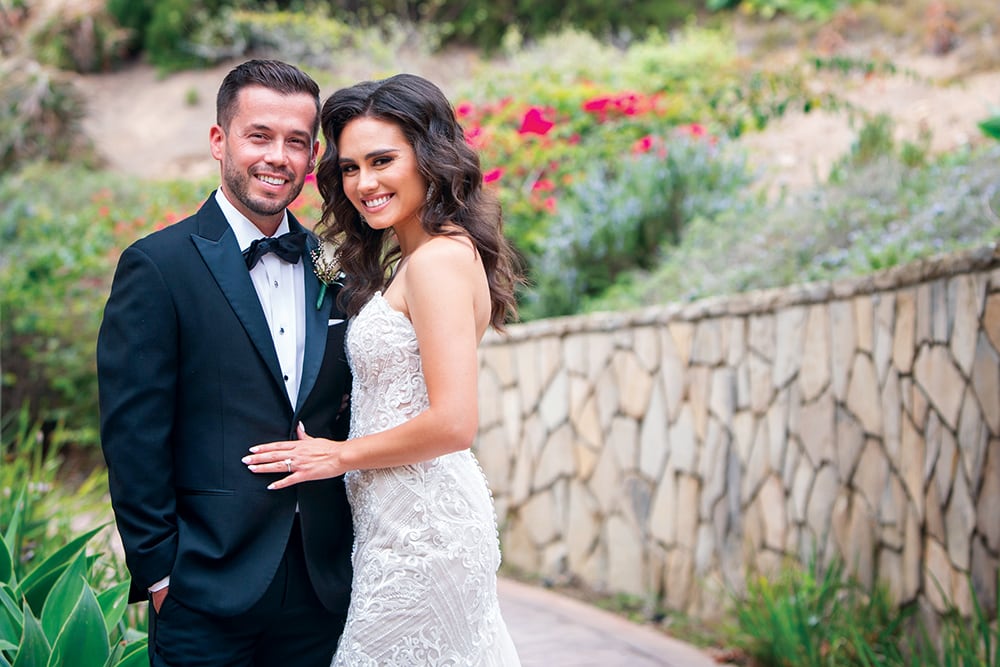 In 2017, Joshua Roupoli stepped into the gym for what he thought would be the last time. His membership had nearly expired, and at the request of a friend, he begrudgingly attended a final spin class before leaving the place for good. “I got there and saw her,” he states, “and I thought, ‘Oh my gosh, she’s so beautiful.’ I had to meet her.” Unbeknownst to Roupoli, the woman was Jocelyn Foust. Roupoli was instantly enchanted. “After the class, I thought, ‘I need to go back and see this girl.’ I knew from the moment I first laid eyes on her, she was the one. I kept going back, and a couple of months later, we were dating. The rest is history.”

Jocelyn Foust, now Roupoli, confirms her husband’s story. “It was so funny. The music was so loud, and he just kept trying to talk to me,” she laughs. Unlike Joshua, Jocelyn realized months later that the man she had met was to be her spouse. “I knew he was the one when he sent me a beautiful bouquet of roses for my college graduation. It was so sweet of him.” Joshua admits that the flowers were strategic. “We weren’t dating at that point. I sent her flowers to let her know that I wanted to be more than friends — I wasn’t even invited to her graduation!”

The strategy worked. The pair began dating in 2017, and in 2020, Joshua booked a trip to Ischia, Italy, his ancestral homeland, planning to propose. “I surprised Jocelyn with a trip to Italy. I bought tickets, the whole nine yards. And then the pandemic happened, and everything changed.” Instead, he elected to take her to the Surfrider Hotel in Malibu, a locale that echoed El Matador State Beach, Jocelyn’s favorite oceanside spot in California. Jocelyn recalls the dinner fondly. “We had had one glass of wine and a cocktail. Josh was so nervous, and out of nowhere, he reaches into his bag and takes out the ring.”

A year later, the pair married at Joshua’s father’s home in Rancho Palos Verdes. According to Joshua, it was a true Italian wedding, complete with catering from J. Trani’s restaurant and set to a bucolic landscape of vineyards, citrus trees, and a Tuscan-style villa. “It was really special,” smiles Jocelyn. “We made our own limoncello and wine for the wedding with grapes from the family vineyard.”

Excluding the ceremony, Joshua’s favorite moment of the day was the morning before the nuptial. “I got Jocelyn a villa at Terranea to take pictures and get ready before the wedding, and Jocelyn’s mom surprised me with Jocelyn’s dad’s wedding ring,” he explains. “Her father passed away in 2020, and it was really tough on her, because she wanted her dad at the ceremony. I wore that during the wedding, and I felt like he was with me, walking me down the aisle to marry his daughter. It was really special.” Jocelyn agrees. “I didn’t know my mom gave it to him, so when we got to the altar and saw his hand with my dad’s ring, it was amazing. The ceremony was the best thing in the world.”

The newlyweds honeymooned in Hawaii, visiting Kaanapali on Maui. They spent eight days hitting the beach and touring local attractions, their favorite stop being a coffee farm that offered tastings alongside a farm-to-table breakfast. Now they’re back in their San Pedro home and expecting a baby girl, whom they intend to be the first of many children. When asked what they believe makes their relationship work, the pair cites balance as the cornerstone of their partnership. “I’m always on the move, going out, and she’s more, ‘Let’s stay home and relax,’” muses Joshua. “We have fun together, and we don’t really fight.” Jocelyn concurs. “We work really well together. Our personalities balance each other, and we’re perfect matches in so many ways. Now we have our little family — it’s so exciting.” spt