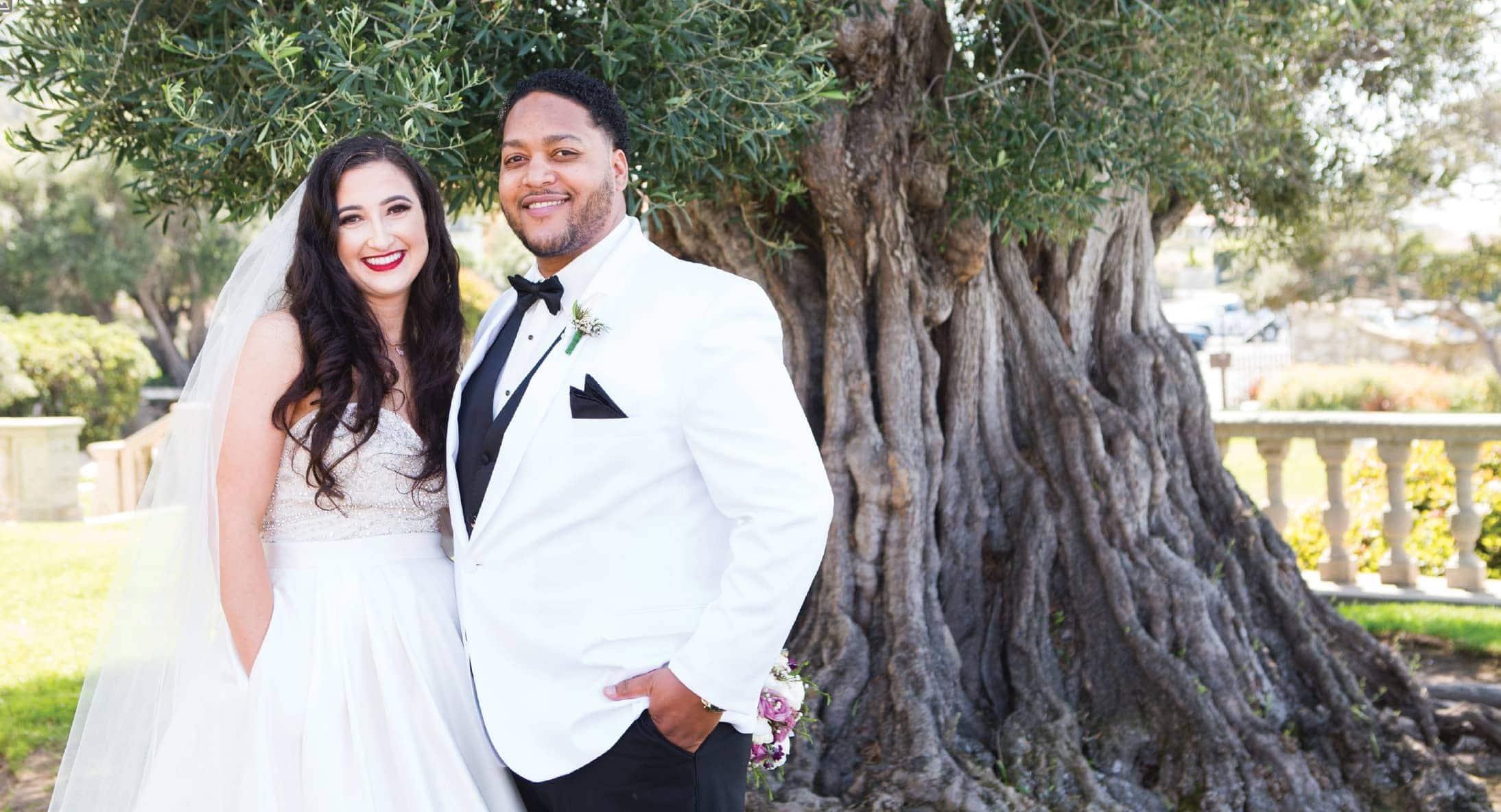 “We literally have grown up together these past ten years,” says Alexa (Iacono).

Though the couple did not attend San Pedro High School at the same time, Anthony, aka Tripple, and Alexa both were involved in Pirates athletics, with Tripple playing football, and Alexa the captain of the short flags team.

The couple met and officially started dating in 2008, when Tripple attended a barbeque that Alexa was hosting. Instrumental in getting the couple together was Tripple’s late uncle Ray, who was also Alexa’s coach. “I still remember the text from Ray,” says Alexa. “It read, ‘My nephew is home from college. Is it okay if he comes to the barbeque? He is bored.’” After that initial meeting, the pair’s first year and a half of dating was somewhat long distance, with Tripple attending and playing football at the University of La Verne, and Alexa attending California State Long Beach, while coaching San Pedro High School’s shields team, The Bannerettes.

“Alexa is selfless and will always put others before herself,” gushes Tripple. “I love her smile and kindness.” In addition to being a good cook, Alexa loves Tripple’s sense of humor. “He is just like my grandpa, Richard ‘Big Head’ Iacono,” says Alexa. “If he isn’t picking on you, he doesn’t like you.”

A perk of their relationship, according to Tripple, are Alexa’s home cooked meals and baking skills. “I remember the moment I won his heart with homemade blueberry muffins I made for him and his football roommates,” Alexa recalls. “Our friend Travis said, ‘Hey man, you gotta keep her. She makes us muffins,’ and Tripple’s face lit up as he took a bite.” Looks like Tripple took that advice to heart.

On March 12, 2017, friends and family celebrated Alexa’s birthday at the Hotel Maya in Long Beach. Unbeknownst to Alexa, Tripple had previously asked her father for his blessing, and during the birthday festivities, popped the question. Tripple recalls fondly, “I wasn’t nervous at all, I was mostly excited to profess my love to my future wife.”

Tripple and Alexa officially tied the knot on April 14, 2018, surrounded by 260 close friends and family.

The wedding date also holds special meaning to the couple. “That weekend would have been Tripple’s uncle Ray’s 35th birthday,” explains Alexa. “He introduced us, and there was no better way to thank him than to dedicate our wedding to him. It was his celebration, too.”

Before making their way to the reception, the bridal party made two surprising, local pit stops. First, the limo stopped for a celebratory sub at Busy Bee. “I was starving and it’s one of our favorite places to eat in San Pedro,” Alexa humorously recalls. Next, the limo visited the newlywed’s gym, All Fit. “It started out as a pose for photos, but I discovered I was strong enough to push Tripple on a sled,” explains Alexa. She adds, “The photos from both stops are pretty epic.”

Following the ceremony, guests were invited to celebrate at a reception at Dalmatian American Club in San Pedro. Cocktail hour featured a mariachi band, live piano, and plenty of fresh seafood and hors d’ouveres, with a reception afterwards in the main hall. “The room was totally transformed into the most beautiful setting ever seen,” says Tripple. The newlyweds hit the elegant white dance floor for their first dance to “Stay With You” by John Legend.

The party has many special treats for guests, including a hookah lounge, and plenty of yummy offerings, including a popcorn table and a large selection of Italian desserts. Each guest also received a lottery scratcher as a party favor. Tripple mentions, “We have yet to find out if anyone won!”

Immediately following the big day, Tripple and Alexa enjoyed a beautiful and adventurous honeymoon in Cancun.
As the couple continues to grow in their love, they also will be growing in family size. Tripple and Alexa are currently anticipating the arrival of a child, due in February. “We hope to continue to grow our family and raise our kids in San Pedro,” says Alexa. Tripple shares his hopes for their family, saying, “We are extremely blessed and want to teach our children the same morals and values we have been taught. We hope to grow old together gracefully and have a life filled with love and laughter.”

Tripple and Alexa currently reside in San Pedro. Tripple works for the Department of Public Safety at the University of Southern California. Alexa is a Lab Manager at Complete Women’s Care in Long Beach, and studying to become a Licensed Clinical Lab Scientist.