Skip to content
Community Voices
Open image in lightbox
The cover of ‘Port of Los Angeles, Conflict, Commerce and the Fight for Control’ by Geraldine Knatz. (Click photo to enlarge.) 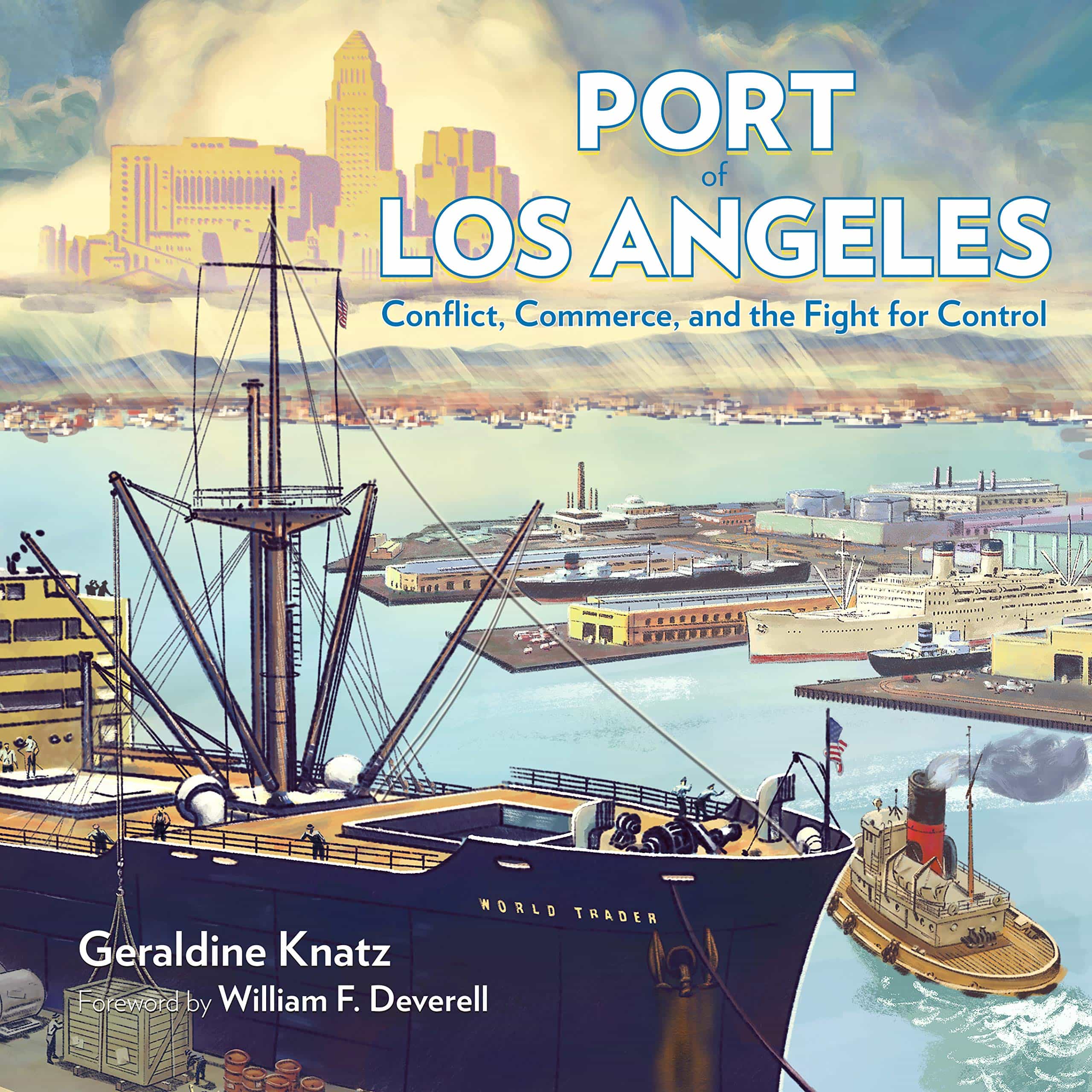 Geraldine Knatz has done it again.

Like Terminal Island, Knatz’s new work must be considered the quintessential history of its eponymous title. I’m tempted to say this is her magnum opus, but I suspect the former executive director of the Port of Los Angeles-turned professor-turned author is not done. Port of Los Angeles begins in the 1890s but ends in 1977 when Knatz began a 37-year career centered on San Pedro Bay, and a lot has happened since then, including her eight years at the helm of L.A. Harbor. She stepped down in 2014 to begin a life in academia and writing.

Readers of this book who think they know a lot about harbor history will find out right away they don’t know the half of it. Phineas Banning and Stephen M. White are given their rightful places as founding fathers of the harbor, but Knatz introduces us to T.E. Gibbon, who may have played a bigger role than either one in creating the harbor as we know it today.

Knatz breaks down her history into three parts: The Rise of the Port of Los Angeles (1891-1913); The Port Navigates Dangerous Shoals (1914-1945), and Global Visions Under Grim Realties (1946-1977). Recently discovered papers have revealed Gibbon’s importance in L.A. history; probably more than anyone else, he was responsible for the consolidation of San Pedro with Los Angeles in 1908 after he helped create the “shoestring” pathway, now known as Harbor Gateway, that connected L.A. to the ocean. He won his political duel with state Sen. William Savage of San Pedro, who wanted to keep his town and harbor independent.

The Gibbon-Savage battle was a harbinger of the port’s future. The blurb on the back of the book says it “reads like a script for another Chinatown,” and that’s just the impression you’ll have as Knatz describes the contentious relationship between Los Angeles and Long Beach harbors, the on-and-off-again attempts at merger, the legacy of Vincent Thomas, and the scandalous `70s that culminated with the mysterious death of Harbor Commission President Pietro DiCarlo. Along the way, you’ll meet the big shakers and movers in port history like Amos Fries and the L.A. Times’ Otis Chandler, among many others.

Replete with 200 maps and images, extensive footnotes and appendices, this book belongs in every San Pedro home.

Knatz was to have discussed her book at Sunday’s meeting of the San Pedro Bay Historical Society, but it has been postponed due to the COVID-19 outbreak. A new date will be posted on the society’s website, sanpedrobayhistoricalsociety.com.

FOOD FOR THOUGHT
To borrow an old phrase, the ink wasn’t dry on my New Year’s column, in which I bemoaned the closing of so many local businesses in 2019 when two more joined the list. Amalfitano Bakery, the second incarnation of longtime San Pedro favorite Ramona’s on Pacific, closed its doors after only 10 years on Western Avenue. Anthony Amalfitano is retiring, and no one wants to pick up the rolling pin. The Grinder on Harbor Boulevard, another decades-long landmark, also closed.

I soon heard from old friend Tony De Girolamo, who spent most of his career in the food industry, lamenting how things have changed. “I was thinking of the `80s,” Tony wrote, “when I sold my Bit of Italy to Domenick Sardisco (whose family now runs Domenick’s in Westmont Plaza). The very same thing happened in those days.

“It’s the family businesses that our kids were not interested to continue (Tony’s son owns an auto repair shop). Now you know that working 24/7 like we did is no longer a way of living. I did retire at 60 and enjoy my (retirement) years. Money is not everything in life. I did not let my pizza kill me, but many others I know did. Serving the community is fine, but greed will kill you or destroy you.

“We went for pizza the other night. My brother is visiting me from New York. Three adults and two kids, a few pizzas, an antipasto. My brother paid about $125. For pizza?” That restaurant, which shall remain unnamed, makes a fine pie, like most of the other family-owned pizzerias in town, but, as Tony noted, at the cost of an arm and a leg (in contrast to chain offerings). And as if San Pedro doesn’t already have enough pizza, just as one restaurant closed on 6th and Gaffey, another one opened on the 2200 block of Pacific.

None of those numbers, however, allow for the effects of a national emergency such as COVID-19. It’s too early to tell how long the closure of Los Angeles restaurants to seated dining will last, but no doubt many San Pedro eateries are suffering, and who knows how many employees have been laid off.

Take-out is the new norm, so in an environment of “social distancing,” pizza makers may actually be thriving. But the impact on the local economy from a long-term shutdown could be devastating.

I mean, how much pizza can you eat? spt