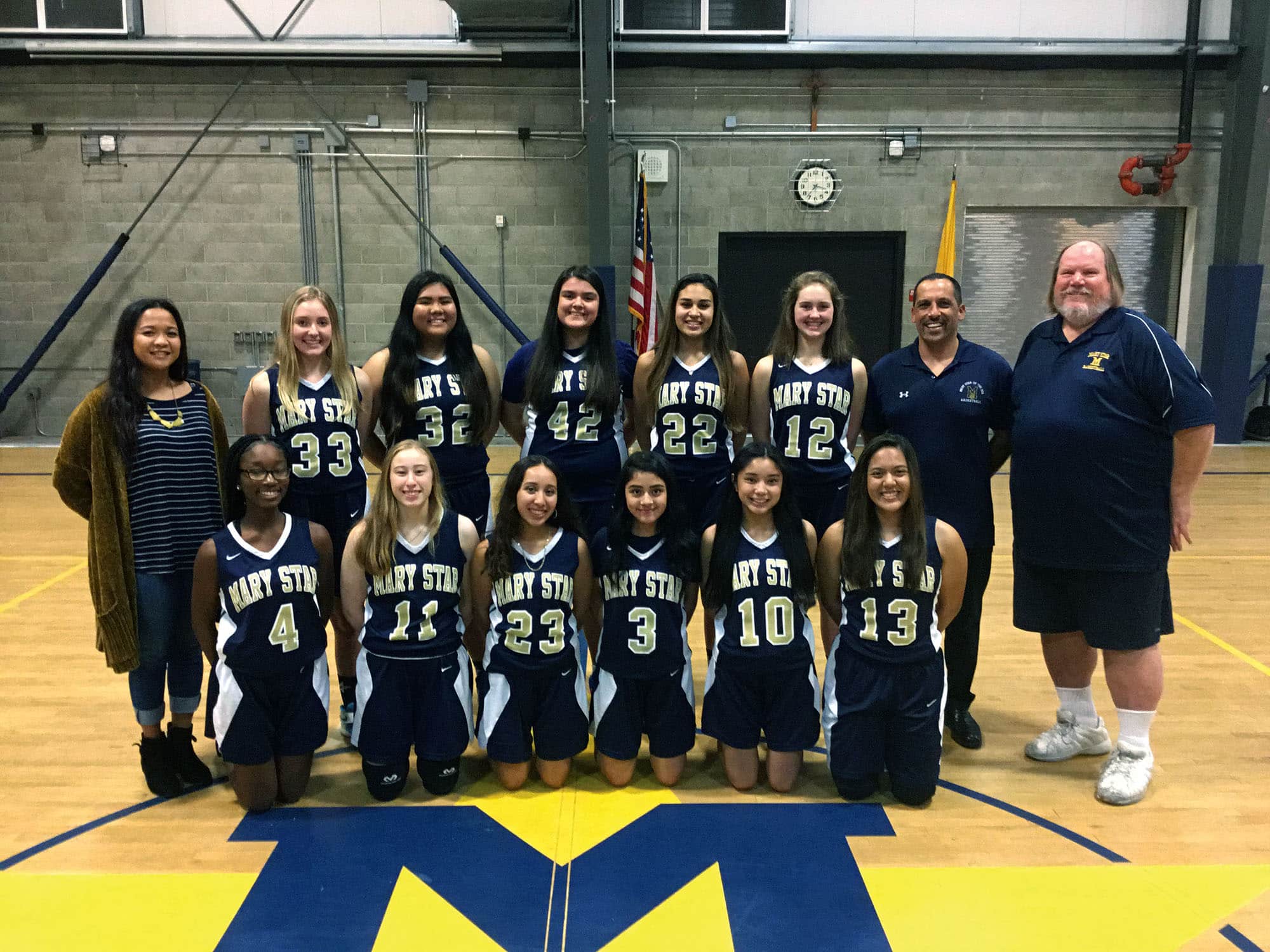 Many get the chance to widen their horizons, but only few realize their dreams.

The 2018-19 Mary Star of the Sea High School girls basketball team got to experience both in a season initially besieged by injuries, but ending with a sense of pride achieving something that no other team in school, or San Pedro history, has done: making it to the CIF State playoffs.

On February 26, 2019 in front of a packed gymnasium of raucous fans at Montclair High, the Stars pulled out a 34-31 victory in the first round of the CIF State Division 5 Southern California Regional playoffs. And to think, this moment would never have happened years ago for certain high schools who were unable make a CIF Section final. “We bonded as a team when it was all said and done,” said All-Santa Fe League junior guard, Sarah Leyba. “And it paid off when it counted the most to get this win.”

Mary Star started off the year 5-10 with key players out due to injury, and impact transfer sophomore point guard, Isabella Serrano, on the 30-day sit-out period. Once Serrano became eligible, the Stars would make a strong run to the postseason after finishing third in the Santa Fe League, all the way to the CIF-Southern Section Division 5-AA semifinals at home against eventual champion, Linfield Christian.

When Mary Star lost to the Lions, their apparent sadness of not being able to reach the final was quickly washed away when coach Victor Tuberosi gave them a startling announcement. “When Vic said that we were going to [CIF] State we all started screaming,” recalls All-Santa Fe League senior forward, Lexi Quilliam. “I felt so happy that we could still play and practice as a team because I had thought that the season was over.”

Several teams in the past, such as the 2017 Port of Los Angeles High girls soccer and 2018 San Pedro High School girls volleyball teams, would only qualify for a CIF State Regional either by winning a Section championship or at least getting to a championship game. Therefore, the euphoria of the Stars was well earned.

Once the CIF State committee expanded the formats to multiple divisions for all the various sections, especially the CIF-Southern Section where semifinalists could potentially qualify, Mary Star would make the most of that opportunity at Montclair, the school who ended up in the CIF-SS Division 5-AA final where Linfield Christian became champions.

Even before the game, the team harmony that the Stars maintained all season long was emphasized with an act of kindness, as senior reserve forward Titi Shodiya, let junior reserve forward Jenna Miloe, borrow her game shoes. “Titi was a lifesaver,” says Miloe, who in all the excitement of playing a Regional, accidentally left her game shoes on campus before boarding the team bus. “She sacrificed what could have been one of her last games of her career in order for me to have the ability to play,” Miloe describes with gratitude. “I will always be thankful for her. She is truly an angel.”

That kind of sacrifice off the court turned into an even bigger one on the court, with over six minutes to play when Serrano fouled out after scoring a team-high 11 points. Sophomore guard Kaitlyn Oasay then raised her game to new heights in the absence of the All- Santa Fe League and All-CIF Division 5 selection. “It was a very crucial moment because we were up by six,” Serrano says. “I felt like that moment would’ve caused them to turn the ball over carelessly, but my teammates proved me wrong. They hustled and got rebounds, passed the ball to Katie and she composed the team when we needed it the most.”

In fact, it was Oasay’s layup off a backdoor feed from All-Santa Fe League sophomore forward Karla Rocha with 1:34 remaining that put Mary Star up 34-28 that was the most pivotal play of the night. Leyba would seal the victory in the closing seconds by rebounding the missed free throw from senior center Lorraine Medina with nine seconds left, and ran out the clock when the Cavaliers were unable to foul her.

In any times of loss or disappointment, one thing has always kept these Stars shining together. “This team’s bond is like none other,” says Oasay. Not even a 17-3 fourth quarter run by eventual Division 5 Southern California Regional champion Ramona of Riverside in a 40-31 quarterfinal loss on February 28 would dim the spirits of these Stars (16-16 overall), nor diminish their moment.

“Honestly, it was surreal,” recalls Medina. “I think the most satisfying part is that we were underdogs the whole season, even in playoffs. No one expected us at all to go as far as we did, so that feeling of being the first to accomplish a big feat like this is amazing.”