Skip to content
Features
Open image in lightbox
M3 performs at a high school in Illinois. 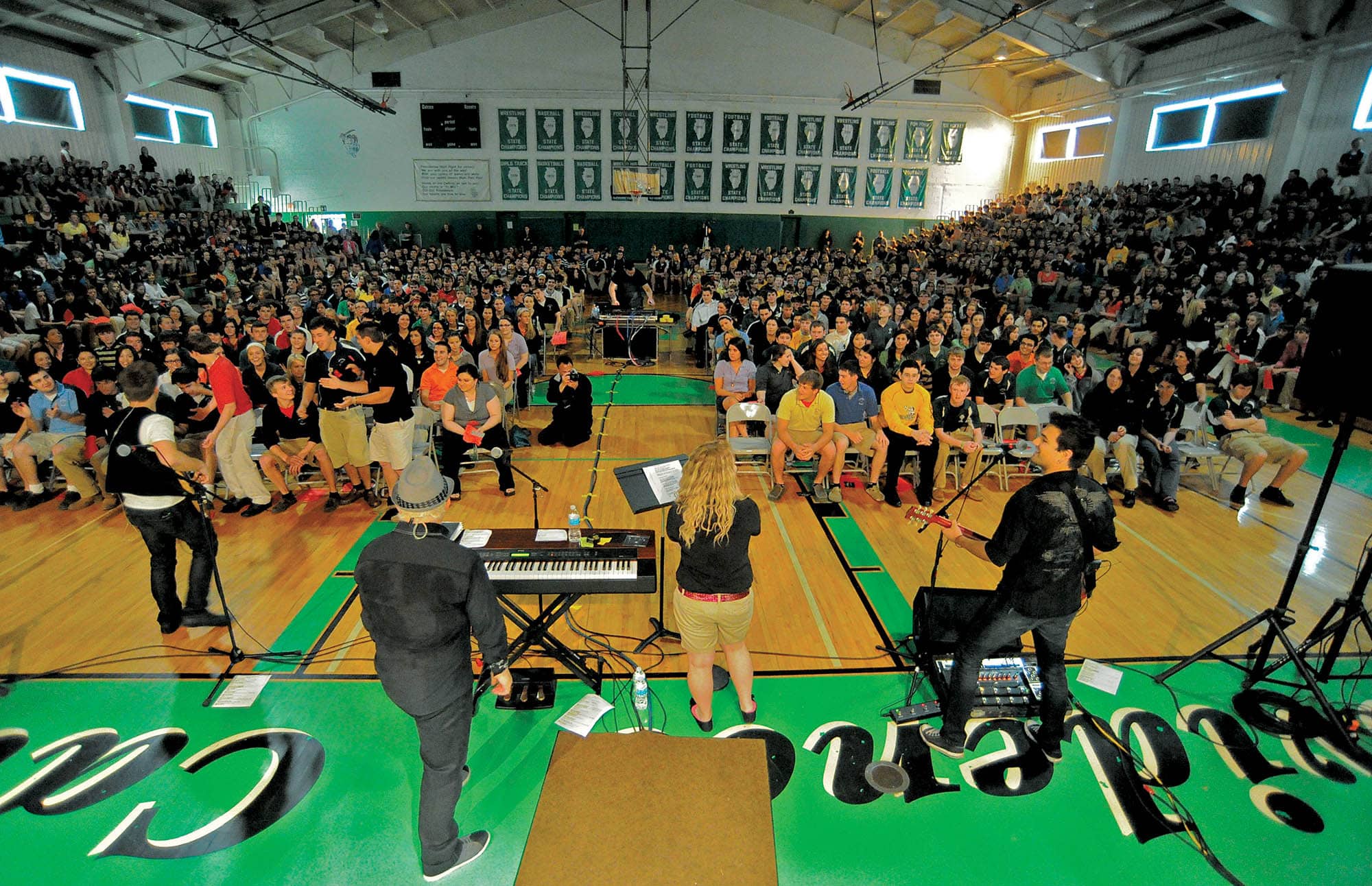 For the past ten years, an initiative that inspires a multitude of students nation-wide and advocates anti-bullying through music has been rocking schools across the country.

Founded by San Pedro natives, Domenico Pilato and Gino Di Leva, M3 Rock n’ Talk’s mission of musical, motivational, and meaningful presentations in schools has garnered a positive response. In a fun, concert-like environment, students are encouraged to navigate some of their deepest challenges with confidence, while also building leadership skills and learning how to think positively.

The live presentational performances are powered by Pilato and Di Leva’s band, Dr.Iven (a.k.a. Driven), which they initially created in the ‘90s with the idea to compose positive beats and lyrics. Some of their original songs, popular cover songs, and old school rock and roll during M3’s performances give the audience a much needed energy boost, with students oftentimes joining them on stage in singing or dance competitions.

At the heart of M3’s mission are guidance and encouragement through the tough topics of adolescence, including bullying, drugs and alcohol, body image issues, and the growing pressures of academics. Wanting to instill a sense of confidence in students, M3’s motivational talks and music also serve as a great reminder and guiding hand that the challenges they encounter today are only temporary. The presentations are custom-tailored to suit specific audiences and age ranges, including a variety of assembly formats to choose from.

“Subject matter really depends on the school and what they are going through. Not all students – not even all grade levels – are alike,” says Di Leva. “We might be in there for a double assembly and talking to the freshman about anti-bullying, and to the sophomores about substance abuse.”

Administrators have gladly welcomed their message, especially in an area or school district where they don’t always have the necessary expertise or resources. “Most local school budgets are for staff salaries and operational costs,” says Pilato. “We have seen a lack of funding allocated funding for different types of programming aside from academic or maybe even extracurricular. We are talking about programs that target issues.”

One of M3’s main goals is to advocate anti-bullying. “We challenge [students] a lot on: do we want to build each other up, or tear each other down?” says Pilato. Their Driven to Decrease Bullying Grant Program was initially created through a student-based focus group, where kids thought of the idea of funding special programs and projects that are geared to decrease bullying in schools. Part of the program is for high school students to become leaders and mentors in middle and elementary schools.

“If we’re able to implement our anti-bullying program into the lower grade schools, then the goal is to have the high school students kind of take over and mentor the younger kids. If we could be in 20 places at once, we would be. We figure we would start implementing something that is going to continue when we are not there,” says Pilato. Students from campuses across the United States can apply for the $500 grant on M3’s website, m3rockntalk.org. 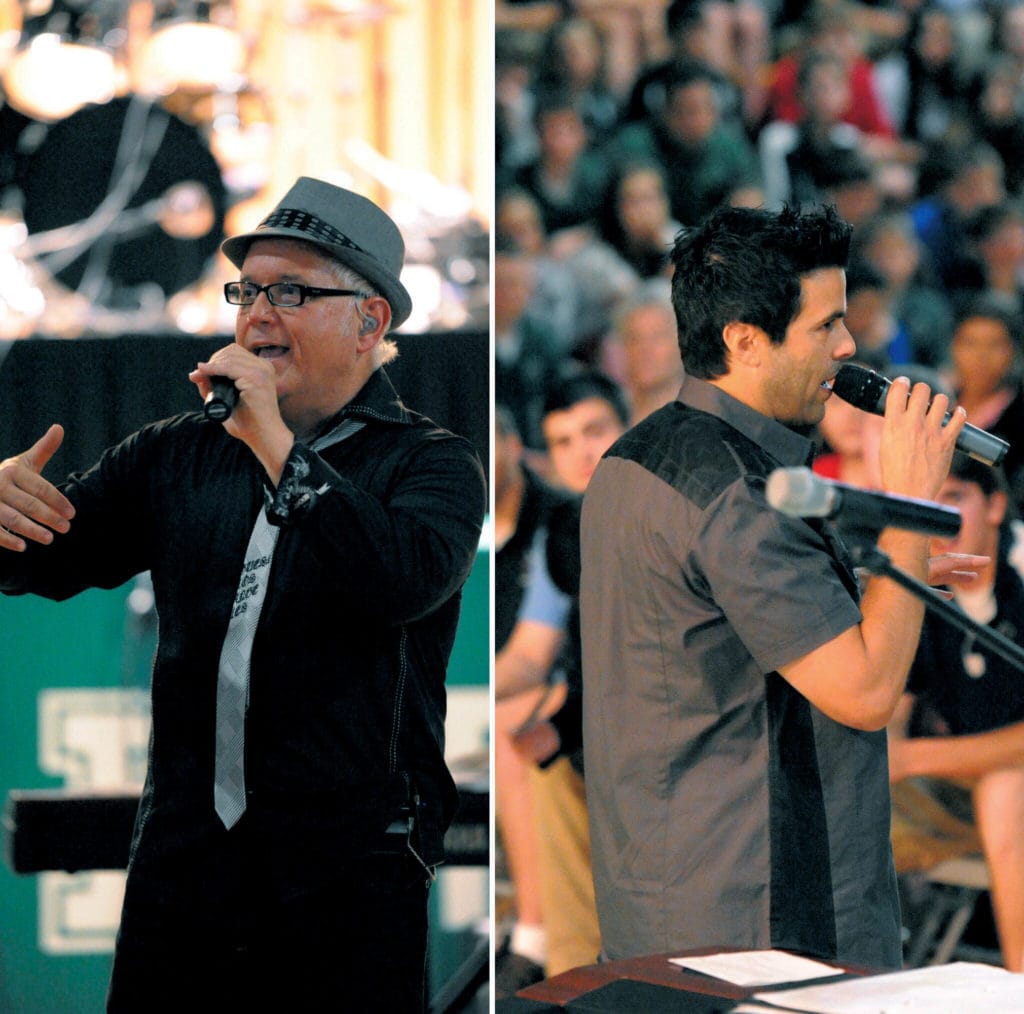 Today’s youth, unlike other generations, have experienced the ups and downs of social media. A rumor or negative comment, for example, decades ago, would have spread at a much slower pace. To tackle the impact of this negative trend, an internet-safe zone was built within the backend of the M3 Rock n’ Talk website, a Facebook or Instagram-like student initiative. Still in the beginning stages, it plans to launch at the national level in the next six months. Until then “the zone” hosts 12 private videos or testimonies in a safe, online environment and welcomes the submission of more. The platform with “human eyes” as Pilato calls it, monitors all comments. They want the students to feel safe to post, open up and interact with their peers. Topics discussed include overcoming body image issues, self-acceptance, immigrating to the United States, and finding and practicing forgiveness.

“What we learned from the kids is that they want a place on the internet where they can go, where it’s going to be monitored, where kids won’t get bullied,” says Pilato. “They said: let’s create a section where kids could go in, share a story and share a solution.”

While M3’s program was initially organized through live assemblies, today their mission is growing. The nonprofit has traveled across the country to major conferences, including the Texas Association of Student Councils and Arizona Association of Student Councils, where they were one of the three keynote speakers last year. In Arizona, they visited five different regions and began pitching the anti-bullying movement. Subsequently, another focus group was built, and M3 gained their first state leader in Arizona, who is at the forefront of the anti-bullying campaign. They are also currently in talks with a global sports research organization that would allocate its social media resources to help promote the nonprofit’s campaigns nationwide.

M3’s ultimate goal is to allow students to create their own initiatives and delegate teams to carry their message forward, allowing for students to become fully in charge and launch campaigns based on their needs and the needs of their peers. Aside from having reached more than 100,000 individuals and organizations and visiting nine states, M3 Rock n’ Talk’s successes have been inspiring youth with confidence to tackle negativity and obstacles throughout adolescence and into adulthood.

For more info on M3 and to view their music videos, visit m3rockntalk.org.