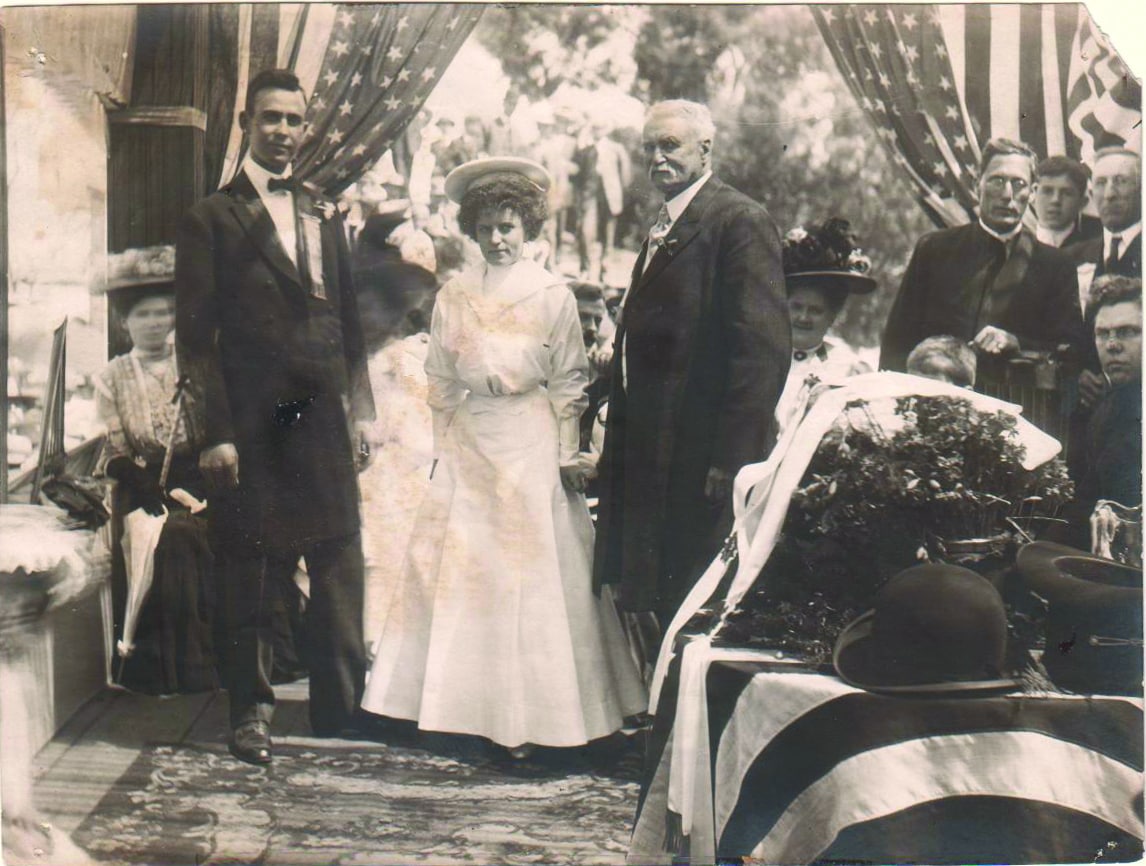 ‘Til Death Do Us PartA Visit to the L.a. City Archives Reveals a Treasure Trove of San Pedro History

There’s a famous photo of the ceremonial marriage of San Pedro and Los Angeles, taken at the Harbor Day Celebration on July 4, 1908, an event sponsored by pro-consolidation interests. In the photo, Miss Pearl Pierson, sporting all white and a sweet dimple, plays the part of the young, virginal San Pedro, full of potential. Next to her stands L.A. Mayor Arthur Harper, a man who looks like he could be Miss Pierson’s least favorite grandfather. The infamously corrupt Harper would resign from office nine months later amid recall efforts and poor Pearl would die in her parents’ home in less than ten years’ time. I think about this photo often because a marriage is the best way to describe the relationship between L.A. and San Pedro. There was a consolidation of assets, L.A. got to make all the decisions, San Pedro, being the modern young woman that she was, decided to keep her name and she’s fantasized about divorce ever since.

San Pedrans have never forgotten that we were once our own city. In fact, wishing that we could be independent, again, is a bit of a rite of passage for us. SPExit will always be that white whale we chase, but there’s a much less complicated way to get in touch with our strong independent roots: visiting the L.A. City archives.

The L.A. City archives are located on the roof of the infamous “Piper Tech” building in Downtown Los Angeles, also home of the LAPD helicopter squadron and crime lab. The entrance is a little non-descript. If there wasn’t a sign over a filthy roll-up door that read City Records Center and Archives, you’d have no idea of the informational riches being housed there. Inside is a sleepy looking room of long wooden tables and stacked file boxes awaiting their researchers. I’m greeted by city archivist Michael Holland. It was Michael who had told me that the old San Pedro city records were in the city archives. Like any good spouse, the City of L.A. took possession of all the San Pedro city records after the consolidation. I’ve wanted to visit ever since.

Before making the trip up to Downtown L.A., I had searched through the online index of available materials and chose several boxes from the San Pedro Municipal Records collection, specifically the city ordinances. When Michael wheeled the stack of boxes to my table, the history moths in my stomach started to flutter. It was as if I was being given boxes of personal effects from a long-lost ancestor and that looking at them would somehow help me understand myself a little more.

All the boxes contained large ledger books wrapped in archival paper. Some of the ledgers contained typed transcripts of minutes, some had typed copies of deed transfers. I wasn’t looking for anything in particular, this was more of a reconnaissance mission. I just wanted to acquaint myself with the materials. One volume was filled with big round script, it was the clerk’s book full of handwritten ordinances, the very first happening on March 5, 1888, establishing the meetings of the city trustees to take place every Tuesday in Judge Weeks’ courtroom on Front Street at 7:30 p.m.

The book of published ordinances included those that changed the name of West Street to Pacific Avenue and the 1903 ordinance that designated Beacon and First Streets as the zero point, where all addresses would be designated north, south, east and west of. Beyond those, most ordinances had to do with grading the streets. That means that the city of San Pedro spent its entire life making the streets more navigable and really just laying the foundation for the town we know, today.

Probably the most interesting volume was the old Harbor View Cemetery ledger. This old book contained a handwritten account of nearly every plot sale and burial at the small cemetery from 1887 to 1915, with a huge gap in 1909 right after consolidation. Unfortunately, the baby that I had been looking for in a previous article was buried some time during the gap in the records. I made sure to take a picture of each page for future reference.

After I finished looking through all of the boxes, I chatted with Michael about the city of San Pedro and consolidation. In the conversation, the question of vote records came up and Michael said he could show me the giant ledger that contained the special election for the consolidation vote. I nearly jumped out of my seat at the mention. When he brings out a book that, when opened, is the size of a small card table, and opens it to the vote record, I am awe-struck.

In front of me is a handwritten tally of all the votes for and against consolidation in August of 1909. The tallies for the L.A. precincts take up most of the page, only one precinct has a double digit no vote. The Wilmington and San Pedro votes are dwarfed by comparison. It was so strange that I was staring one of the most consequential records in San Pedro history, right in the face. It was the marriage certificate of San Pedro and Los Angeles.