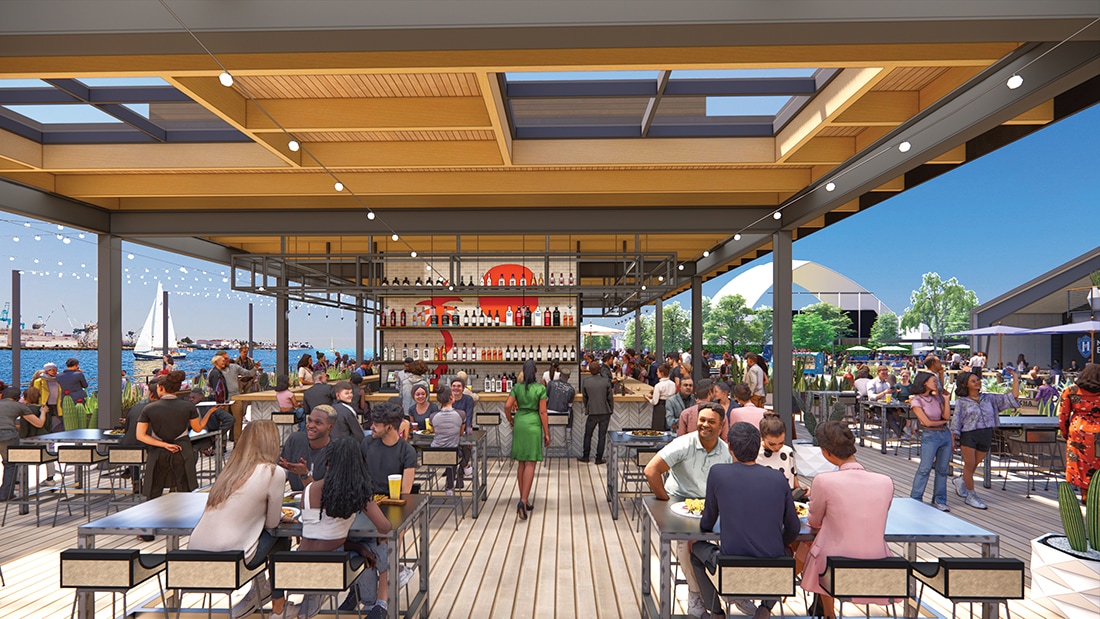 An Update on West HarborYou have questions, we have answers! With a groundbreaking and public preview party set for this month, we answer the most asked questions about West Harbor's highly anticipated opening.

Around the time you read this, ground will finally be broken on San Pedro’s largest retail redevelopment project in generations, West Harbor.

“It’s hard to believe, really,” says Alan Johnson, who, along with his brother Eric, are the men behind San Pedro-based Jerico Development.

Many people thought this day would never come. For more than a decade, the developers of West Harbor, a partnership between The Ratkovich Company and Jerico Development, have been working with the Port of Los Angeles to build a world-class waterfront destination worthy of a city like Los Angeles. After several starts and stops, many artist renderings, many more public meetings, and way too many rumors, not to mention a global pandemic, shovels will finally be hitting dirt this month.

The 42-acre port property is entitled for more than 335,000 square feet of development over a 66-year ground lease. For size comparison, according to the developers, you can fit the entire Grove shopping mall in just the North Park section of the project alone. 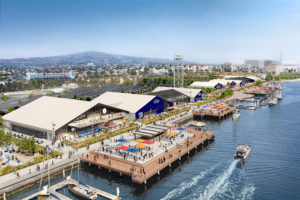 Hopefully, you’ve read enough about West Harbor in these pages over the years to have a general knowledge of what’s going on. (You can read about the project’s history in the October 2021 issue of San Pedro Today online at sanpedrotoday.com.) This month, we spoke with representatives from Jerico Development to help answer some of the most asked questions about the highly anticipated project as the developers prepare for their first public preview party on Saturday, November 12.

WHEN WILL WEST HARBOR OPEN?
This is, by far, the most-asked question about the project, even though most San Pedrans have taken an “I’ll believe it when I see it” attitude. As construction begins this month and residents start taking notice, expect to see more people asking about what’s happening at the waterfront very soon.

As of this publication, according to the developers, plans are for West Harbor to officially open in the first quarter of 2024 with nearly a dozen tenants, mostly new restaurants, a modern family play area, and a waterfront dog park (with a bar!) called North Park. (See the construction schedule graphic below.) 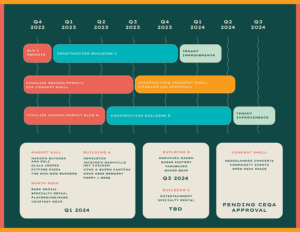 An updated construction schedule for West Harbor, with the initial opening slated for the first quarter of 2024. (courtesy West Harbor)

Also, there are still plans for a 6,200-seat waterfront amphitheater operated by Nederlander to open down the line in a third or fourth phase. That portion of the project is currently under environmental review.

WHAT WILL BE OPEN ON OPENING DAY?
While there will likely be an opening day celebration, expect most, if not all, of the restaurants and shops to have their unannounced soft openings throughout early 2024.

“There’s still talk about whether we soft open North Park or we soft open [the first building] or we do them both,” says Valerie James, vice president of business development for Jerico Development. “At the end of the day, it’s going to come down to how quickly the tenants can build.”

Here’s what’s slated to open in the first quarter of 2024:

A local favorite in Newport Beach, Mario’s Butcher Shop & Delicatessen will now bring its offerings to the San Pedro waterfront, featuring a premium selection of meat and poultry cuts and a delectable menu of deli favorites, including sandwiches, burgers, and more.

With several locations across Southern California, Pitfire Pizza will expand into the San Pedro waterfront with a unique selection of artisan pizzas, plus a full menu of pasta dishes, salads, veggies, desserts, and more.

As described on their website, The Win-Dow “is a destination for classic smash-burgers, fried chicken sandwiches, and $8 grain bowls…best enjoyed by pulling up a stool outside and hanging out with our neighbors.”

Hopscotch is an immersive and experiential 17,000-square-foot art gallery with a restaurant and lounge area and an additional 2,000 square feet of outdoor space. According to their website, they “bring together artists in collaborative environments to create unique, impactful, and distinct shared experiences.”

With several locations in Southern California, Jay Bird’s Chicken brings some Nashville flair to the waterfront with their fast-casual hot chicken sandwiches.

Mike Hess Brewing will bring premier craft beers and more to the San Pedro waterfront with plans for an 18,000 square foot, indoor-outdoor, dog-friendly biergarten right next to the highly anticipated amphitheater. 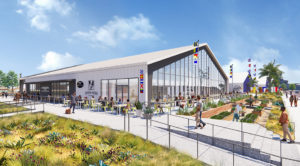 Poppy + Rose, the popular country-style breakfast and brunch spot in Downtown Los Angeles, will open a new location along the waterfront with a 2,000-square-foot patio and active garden, where they’ll grow their vegetables and herbs on-site.

Located in the North Park section is something many San Pedrans have been waiting for, a modern dog park. Bark Social is the first social club for dogs and dog lovers. Amenities will include delicious food and drink menus for humans and dogs, 20+ craft beers plus cocktails, seltzers, and wine, a climate-controlled clubhouse, self-serve dog baths, free Wi-Fi, and more.

There will also be a courtesy dock where Harbor Breeze Cruises, owned by Dan Salas, will bring their fleet of double-decker sightseeing ships to West Harbor, offering whale watching and dinner cruises.

If things stay on schedule, the second round of openings is expected just a few months later. Here’s what’s slated to open in the third quarter of 2024:

Co-owned by film producer and real estate developer Elie Samaha and frequented by celebrities and influencers, Sugar Factory is an over-the-top American brasserie and candy shop known for its decadent drinks and desserts with locations all over the world. 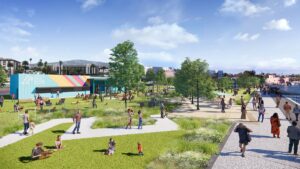 Also co-owned by Samaha, Yamashiro, the century-old Japanese-fusion restaurant in the Hollywood Hills, will open its second location along the waterfront where the San Pedro Fish Market currently resides.

Adding to its many locations across the U.S., The Baked Bear’s new San Pedro waterfront location will offer its creative selection of custom ice cream sandwiches, among a few other dessert options, all sure to satisfy any sweet tooth.

WHAT’S THE PARKING SITUATION?
With 2,000 parking spaces planned and more available spaces in Downtown San Pedro, the developers are confident there will be ample parking at West Harbor.

Of course, like everywhere in Los Angeles, parking won’t be free. How much it will cost has yet to be determined. There will also be Downtown trollies and other mass transit options available. 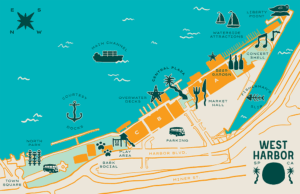 A new map showing the location of the buildings, parking, and open space. (courtesy West Harbor)

WILL WEST HARBOR BE PET-FRIENDLY?
The short answer is yes. While the entire 42-acre project is considered family- and pet-friendly, West Harbor promises to deliver an attractive, modern outdoor park and kids’ activity area, including a state-of-the-art dog park.

“We always had this idea of a dog park, a bar, a restaurant, and a kids’ play area. Just all right there,” says Johnson. “Simple as that. You bring your kid, your dog, or both, or neither, or you can have a drink and something to eat on the water.”

He continues, “[I love] that West Harbor is turning into this really nice, dog-friendly, kid-friendly, family-friendly project. It’s not just come, eat, and leave. It’s much more than that. Between Hopscotch, the programming, the festivals, all the things we’re going to do, it will maybe regain what Ports O’ Call once was.”

“Even though we have Bark Social, which is super cool and fun and trendy and a social space for you and your dog, the whole project is going to be pet friendly,” says Lauren Johnson, a representative of Jerico Development working on the West Harbor project and Alan’s daughter. “Many, if not all, of our tenants will allow pets to a certain degree because we have a ton of open patio space. [Mike Hess Brewing] has an almost 20,000-square-foot open biergarten. So that’s going to be all pet-friendly. Our overwater decks are outside, so those will be pet friendly.”

WHAT’S THE PUBLIC PREVIEW DAY ABOUT?
If you want to check this out for yourself, West Harbor will be holding its first public preview day on Saturday, November 12, from 10:30 a.m. to 3:30 p.m. on the new West Harbor Promenade.

The developers invite the public to “experience the flavor and fun of what’s to come.” The daylong festival will feature food and drinks from upcoming West Harbor tenants and San Pedro favorites, a biergarten, live art and entertainment, kids’ activities, new project renderings, and information. Also, Harbor Breeze Cruises will be running free cruises along the harbor.

The event is free to the public, but you must register online to attend at westharborla.com.

For the Johnson brothers, as the local connection to the project, the importance of getting to this point hasn’t been lost on them. They know how important it is to stick the landing with this one.

“Thank you for all your patience,” says Alan. “The fact that we’ve had the opportunity to do this, that we were entrusted with this, we do not take that lightly. We take it very seriously. We understand because we know this town so well, the importance of it. The importance to do it right. The importance of where this will be in the life of our town. We are nothing but honored to be able to have done that. Has it always been fun? No. Has it always been straightforward? No. Has anybody lost sleep over it? Yes. But in this time of working on it, it’s been quite an odyssey.” spt

For more information about West Harbor and to register for the free event on Saturday, Nov. 12, visit westharborla.com. 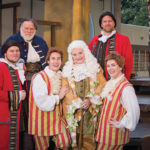 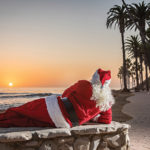 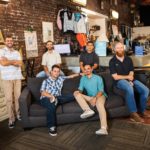 The Men of Beacon House 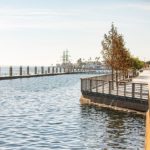