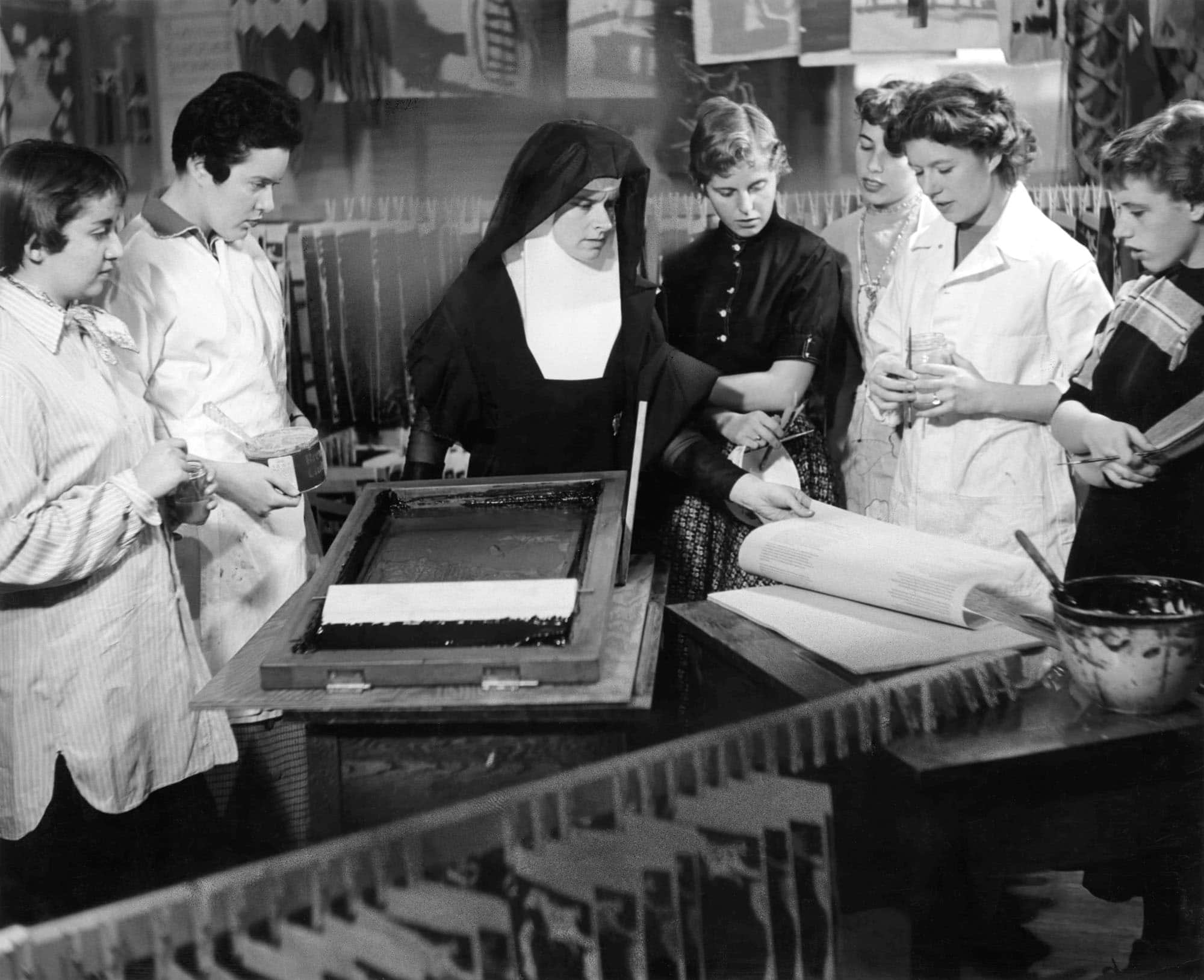 Do you remember the LOVE postage stamp that came out in 1985? The one with the bright strokes of color? That stamp was designed by Corita Kent, a former Catholic nun who was a pioneering visual artist and educator. Kent experimented with words and color to create optimistic and socially conscious pop art. 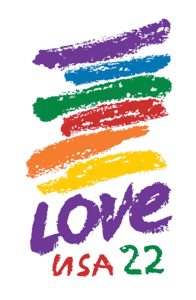 Born in Iowa in 1918, Kent grew up primarily in Hollywood, where her large family had relocated in the 1920s. After high school graduation, she entered the Sisters of the Immaculate Heart of Mary convent and took the name Sister Mary Corita — or Sister Corita, for short. (Corita is “little heart” in Latin.) Sister Corita later taught at Immaculate Heart College in Hollywood from 1947 to 1968. She made a huge impression on her students, some of whom are prominent artists and educators in San Pedro.

Judith Blahnik attended Mary Star of the Sea High School in the late 1950s and early ‘60s. Back then, the school was largely staffed by nuns from the Sisters of the Immaculate Heart of Mary, Sister Corita’s order. Blahnik heard about social change, the civil rights movement, and personal responsibility from these nuns. “I was just blown away and hungry for the passion with which [the order] lived their lives as a community and as individuals,” Blahnik says.

Blahnik studied theatre arts at Immaculate Heart College. She later worked with Artistic Director Gordon Davidson (Mark Taper Forum) to bring theatre groups to prisons. That sense of risk and improvisation was pure Corita Kent. “We would take a choreographer, a few actors, a director, a playwright, a lighting designer, and work with inmates to create a piece. We’d be there for six months and then invite Taper audiences,” explains Blahnik. After working in New York for several years, Blahnik returned to San Pedro and began working with Camilla Townsend at the San Pedro Chamber of Commerce. At this time, talk was brewing about integrating San Pedro artists with downtown businesses in a mutually beneficial business model.

When the Community Redevelopment Agency, the Chamber, and local artists met for the first time, Blahnik was there. “I had never been part of something so raw,” she says. “People were coming in angry, hungry, and also ready to be inspired and ready to inspire each other.” Later, as president of Angels Gate Cultural Center’s board of directors, Blahnik used her passion for group alchemy to mend a schism between the artists and the board. “The process was very egalitarian and vibrant, down to crafting a new mission statement,” she shares. Corita would have been proud.

Retired educator and civic leader Camilla Townsend also studied theatre at Immaculate Heart College. She realized that she loved the production end. “It’s what inspired me in any leadership position because it involves using teams. You start at the very beginning, you have a concept, and you have a vision, but you use a team to make it happen,” shares Townsend.

“I became programmed with [Corita’s] thinking. It was thinking outside the box,” Townsend continues. “You were never grounded in the idea of having to do it this way or that way. Corita had a spirit of excitement, of adventure, of awe, of wonder. That was what it was about.”

“We wouldn’t have an arts district without Camilla,” says Linda Grimes, executive director of San Pedro Waterfront Arts District. “Her advocacy and activism codified and gave it shape.”

“That was the beauty,” says Townsend. “It was right there waiting for us. We had the basics. We had the charm with the architectural structures of old buildings in Downtown San Pedro. It was a perfect place to identify as an arts district, to start it, and to then expand it eventually.”

“What’s happened with the arts district is that it’s developed substance,” Townsend continues. “It’s not just a bunch of galleries that open on Thursday night. It’s a place of joy, a place where people can congregate and see each other, which is what we wanted. It’s a place to learn.”

Townsend also took skills learned from Sister Corita into the classroom and, later, into education administration. When she was the principal of San Pedro Adult School, Townsend met and hired fellow Immaculate Heart College alumna Annette Ciketic, who had also studied under Sister Corita.

Annette Ciketic established fINdings Art Center in 2007. “At that time, it was just a dream, but we wanted to continue the legacy of Corita … mostly about her method of education,” shares Ciketic.

Sister Corita Kent on the cover of Newsweek in 1967. (photo: Corita.org)

The fINdings Art Center is a gallery for Corita Kent’s work and a center for programs inspired by her philosophy. The Center’s Women’s Project started when mothers from the Meyler Adult and Family Learning Center were learning about writing resumes. At the time, they weren’t aware of any marketable skills. Ciketic said, “Number one, you’re all bilingual. Write that down.” What about other skills? “Well, we then received a request from someone who said that her dream was to make scarves for homeless shelters and women’s abuse centers,” says Ciketic. “Did we know anyone who could knit? Well, all these women knew how to knit. Before you knew it, fINdings became a volunteer center for knitting for that project and others. Years later, we’re still making gifts.” The women use donated upcycled and recycled materials to make their items.

“Our other big thing is our show for causes,” Ciketic continues. “Every month, we invite an organization to come in and do an art exhibit so they can promote their art and their programs. My commitment now is to work with high school kids who will be our future leaders of the artists of San Pedro. That’s part of my teaching. Corita said, ‘You’re not doing it for your art, but you’re doing it for the future of art.’”

As an Adult ESL teacher, Connie McOsker met Annette Ciketic and Camilla Townsend. “Through the years, I learned about Corita through their example. Annette taught me about connecting people,” says McOsker. “With Camilla, there was such a trust in my teaching abilities. She was very open to any ideas that I had, or any other teachers had. There was always movement forward, a real sense of experimentation, and I believe that comes from Corita.”

Following the model of bold women like Annette and Camilla, McOsker stepped into the unknown and agreed to facilitate an ESL class with Japanese taiko drumming. “It’s been an excellent way of allowing immigrant populations to have confidence while learning English and doing something new,” she says. “The outcome has been stress relief, building community, and feeling a part of San Pedro. Those things also have come to me and to others through Corita as well.”

Artist Laurine DiRocco also studied under Sister Corita. “Teaching is my art form. I always thought of it that way. I wanted to get better at it. Do it better and learn more,” shares DiRocco. “Sister Corita would partner with students in ways that other teachers didn’t. When I was in leadership roles at UCLA at the Laboratory School, I would always get the input of my colleagues. I think that’s important for anyone in a leadership role.”

DiRocco echoes the sentiments that so many others have expressed about Sister Corita and the ongoing ripple effect she’s had on her students and the San Pedro community: “It’s almost impossible to convey the totality of what Corita gave me.” spt