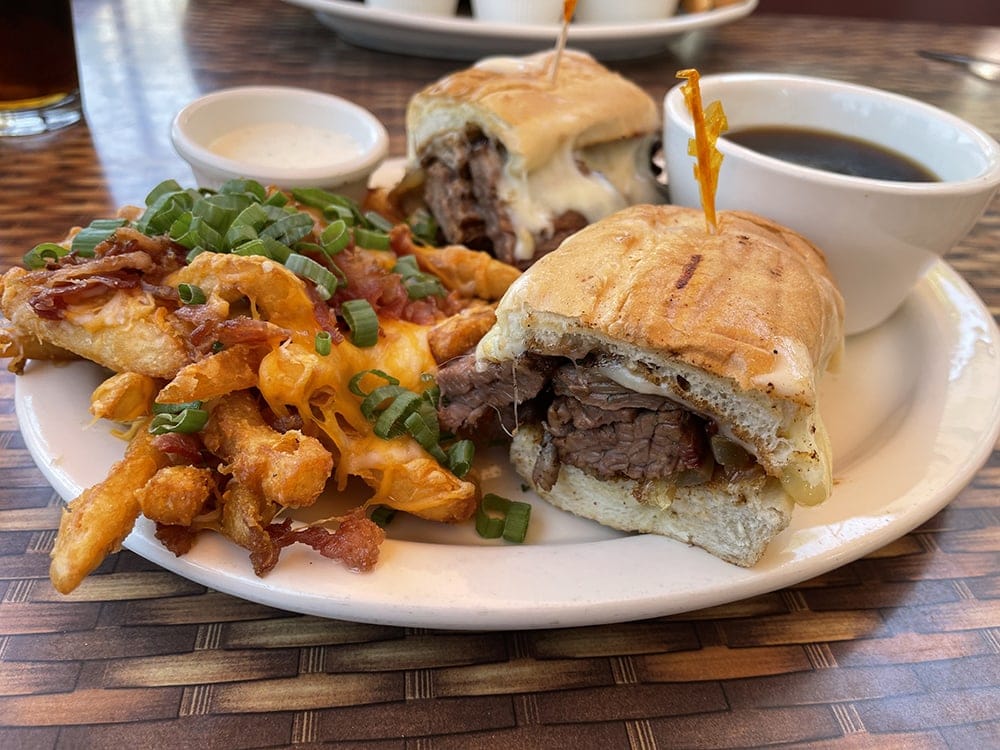 In recent years, the culture of smoked meats has found a foothold in Southern California. I never fully appreciated the amount of work, technique, and time that went into smoking meats until my husband purchased a smoker. This discovery helped me identify my preferences — dry-rubbed brisket and ribs with good BBQ dipping sauce — as well as distinguish simply smothered-in-sauce menu items presented as BBQ. The good news is we have options in town worth trying. 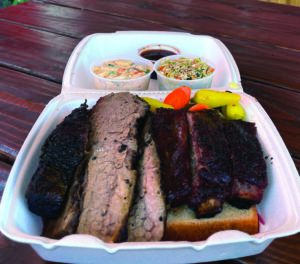 During the first month of Eat in San Pedro’s existence, a group of us used to grab lunch on Fridays and eat while on Zoom. My friend Geri Gioiello suggested trying the newly opened Whiskey Flats BBQ (3401 S. Pacific Ave.). Her niece’s husband, Cristian Farrow, left an unfulfilling career to pursue his passion to open a barbeque joint. The renovation of the long-shuttered gas station into a shop coincided with the beginning of the pandemic. At the same time, Farrow’s childhood friend Toby Kanemaki, a trained chef, became unemployed because of restaurant closures. Out of adversity, a partnership was born. Texas-style may have been the initial inspiration, but experimenting with familiar spicy flavors that the partners grew up with has resulted in their prideful San Pedro Style BBQ. Many items with a hint of spice on the revolving menu enhance the flavor without leaving an unpleasant burning sensation.

An example of this is their housemade spicy BBQ dipping sauce, which I love with their consistently moist brisket; it rivals their aji verde, a Peruvian green sauce, which pairs perfectly with their smoked chicken and pulled pork. Meats are served with a slice of white bread, two sides, and spicy pickled vegetables. The collard greens and k-slaw are my preferred sides. Upon meeting during my last visit, Kanemaki introduced me to their tacos. My favorites are the al pastor with smoked pineapple and brisket tacos.

Undoubtedly, the pandemic has created a shift in the food industry, leading to new food entrepreneurs. Many unemployed restaurant workers and aspiring home cooks alike have found creative ways to monetize their homemade food to stay financially afloat. The California Microenterprise Home Kitchen Operations bill, although not yet recognized by L.A. County, has helped this shift. Social media has played a key role in reaching customers and garnering the attention of mass media publications that have highlighted the creativity of these resilient untapped culinary talents. I often encounter these sellers on our own town’s various social media channels. 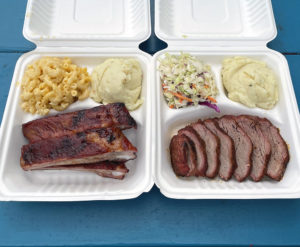 Jose “Che” Sanchez’s love language is cooking for others; he wants to see a happy smile at first bite and get you “BBQ wasted.” Big Che’s BBQ was born with much encouragement from family and friends when Sanchez was laid off from the aerospace industry during the pandemic. Sanchez’s smoking style results from years of research and experimenting, resulting in blending various seasonings and patiently slow smoking with fruitwoods. I was impressed at how flavorful and smoky his meats are because these are two traits that I look for. Thus far, I have tried his tri-tip, spareribs, and beef ribs. Sanchez has perfected the flavor of his specialty: al pastor ribs. The staple menu also includes smoked chicken, turkey leg, and pulled pork. Offerings are usually sold by the rack or pound. Once a month, plates with two sides are also offered; I particularly like the tangy coleslaw and mashed potatoes. For menu and orders, visit Instagram account @BigChesBBQ.

I visited San Pedro Brewing Company (331 W. 6th St.) when I saw on Facebook that they have smoked ribs. The truth is, Whiskey Flats BBQ and Big Che’s BBQ set the bar high, so the barbeque ribs and chicken plate served with coleslaw, creamed corn, garlic toast, and a side of your choosing fell a bit short here. However, I am a fan of the smoked brisket sandwich with my beloved Gaffey fries as a side and the Santa Maria tri-tip plate with mac and cheese. spt 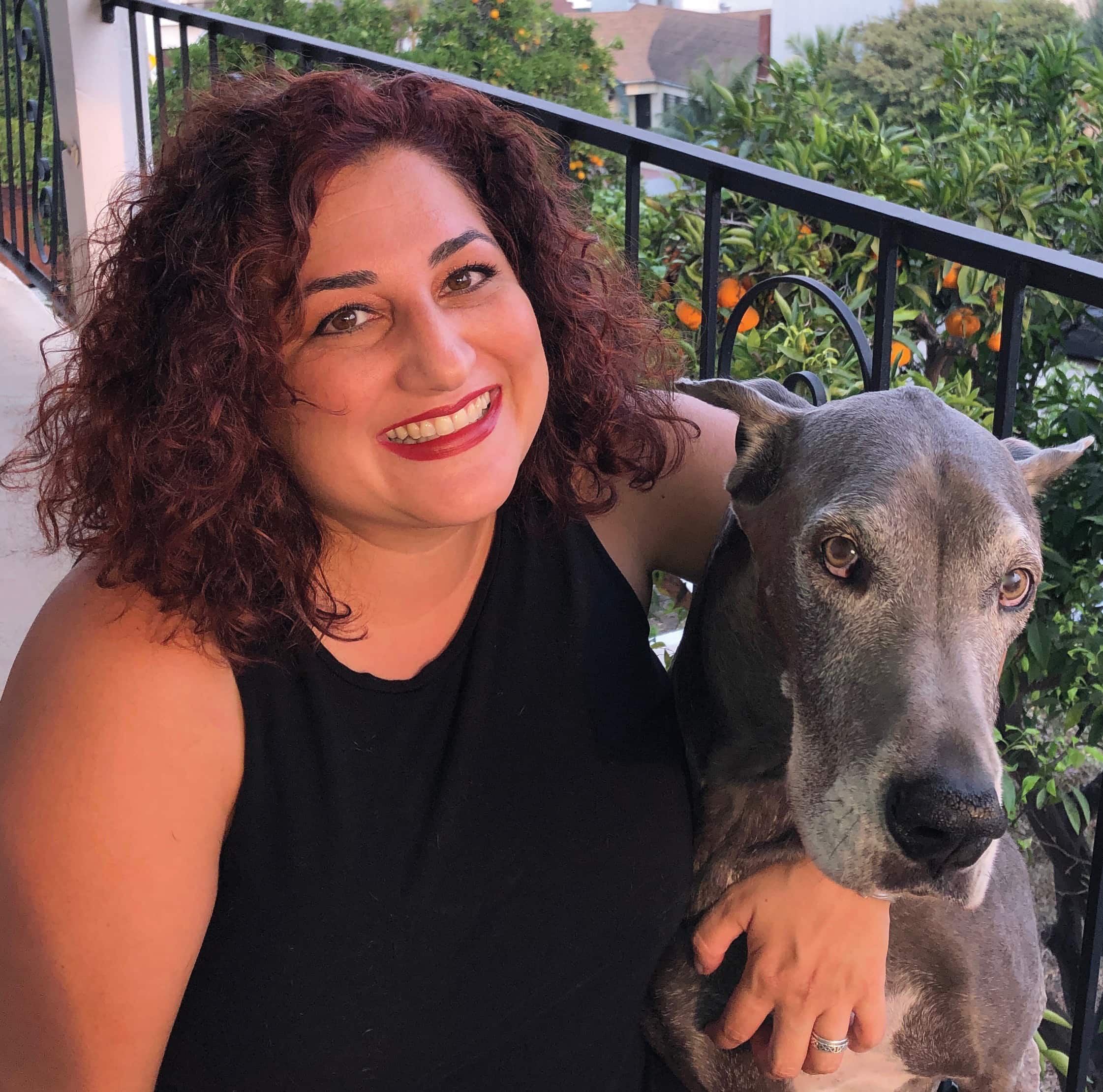