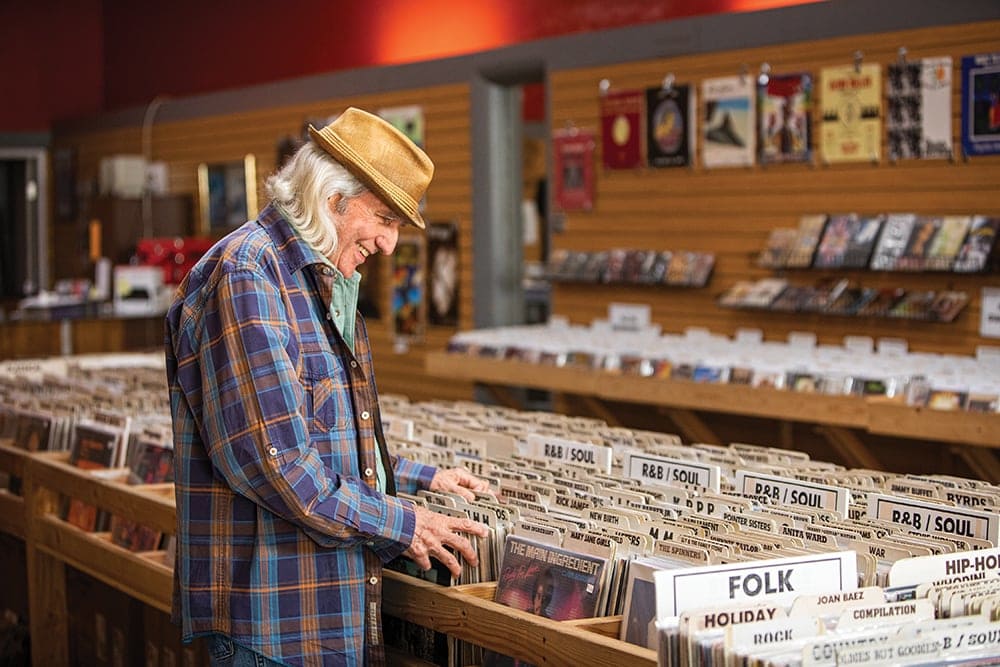 In a world where everything old is new again, it’s no surprise that vinyl albums are making a comeback.

Last year, vinyl albums outsold compact discs for the first time since 1986. Fueled by audiophiles, hipster culture, and nostalgia seekers, vinyl album sales were up 46 percent in the United States compared to 2019, with a whopping 27.5 million LPs and EPs sold, according to the Recording Industry Association of America’s (RIAA) year-end report. 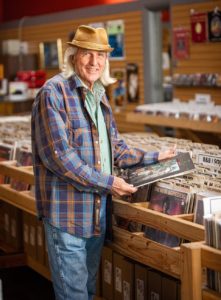 “Vinyl is here to stay,” says Jim Callon, 78, owner of JDC Records on Sixth Street in Downtown San Pedro. “I don’t think it’s going to go away. It’s not going to get huge like it once was, but I think it’ll be around.”

Callon would know. As someone who’s spent his entire adult life in the music industry — as a musician, engineer, record label owner, distributor, and retailer — he’s experienced firsthand all the trends and technologies. From the death of disco to the digital streaming revolution and everything in between, Callon’s career has ebbed and flowed with the times.

THE GLASS FAMILY
Born in Arizona but raised in Los Angeles since he was a baby, Callon grew up with a love of music. That passion carried over to UCLA in the mid-sixties, when he and some college friends started a psychedelic rock group, The Glass Family.

“We played fraternity parties and whatnot,” recalls Callon. “And I went on to get my Masters in English Literature [as a fallback career], but during that time, my band got signed to Warner Bros. in 1967.”

After releasing their debut album, Electric Band (1968), the band went from college parties to venues like the Troubadour and the Whiskey a Go-Go, sharing the bill with some legendary sixties groups.

“We were pretty successful for a B-rated band. We toured and played with The Doors, the Grateful Dead, and Janis Joplin. I have a lot of great stories,” laughs Callon. “When we played with the Dead, [their soundman] Owsley Stanley would leave LSD in little cups on the amplifiers. It was a whole different time. But we also had the Vietnam War to contend with.”

For myriad reasons, and in typical rock ‘n’ roll fashion, The Glass Family would break up just before recording their second album. 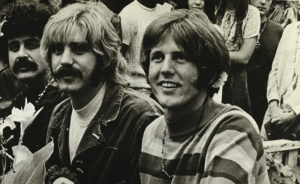 “I didn’t want to be on the road anymore. It’s not glamourous. It’s really hard,” says Callon. “So, I got married [to his now-late wife Dacie] and had a child and had to find a stable lifestyle. I got a job producing a record, and then I started getting more interested in production and the studio. In the seventies, I became a recording engineer.”

Working mostly out of Hollywood Sound Recorders, Callon was engineering albums for acts like Captain Beefheart and Glen Campbell before discovering his passion and expertise with funk music.

“In the mid-seventies, I started to get really good at this,” says Callon. “One night, one of the other engineers said, ‘I got this crazy band from Detroit coming in tonight. I don’t really want to work with them. Will you take my slot?’ I said, ‘Sure.’ It turned out to be George Clinton and Parliament-Funkadelic before anybody knew who they were.”

“I fell in love with these guys. The other guys didn’t want to work with them. [They said], ‘They’re too crazy. They’re too flamboyant,’ whatever. No, it was magic,” recalls Callon. “And so, for the next three years, I became their exclusive engineer. I’m really proud of my work on Mothership Connection.”

In particular, one Parliament track, “Get Off Your Ass and Jam,” began receiving a lot of attention at these new popular dance clubs called “discos” that were popping up across the country in the late seventies. Curious to hear how the track sounded in a club, Callon recalls the night he went out to a disco in Los Angeles and was shocked at the size of the crowd and their passion for this new style of music.

“I go to this big disco in town, Studio One, and I hear [the song] over this huge sound speaker with the lights and everything going. I said, ‘Man, this is happening!’ So, I went and cut a disco record with my band.”

This second iteration of The Glass Family lasted just long enough to produce two disco albums in 1978, both landing on the Billboard charts.

“We sold the rights all over the world. We were riding high with it,” says Callon. “I quit engineering and started our own label; everything was going well. And then disco died. Remember that?”

Disco exited just as fast as it entered pop culture, leaving behind a trail of velour tracksuits and bellbottoms and warehouses full of unsold disco albums.

“When disco died, that was it [for the band],” says Callon.

JDC RECORDS IS BORN
With The Glass Family done again (for now), Callon and his wife turned their attention to running the new record label, JDC Records, named after the couple’s initials (Jim and Dacie Callon). The Callons discovered that while disco was dead in the minds of the music industry, disco/dance albums were still in high demand across the country. Callon saw an opportunity and went around to as many disco labels as possible and bought their entire inventories.

“It was good stuff, really good music,” he remembers. “I started selling it to stores. That’s how I became a distributor of disco and dance records in 1979.” 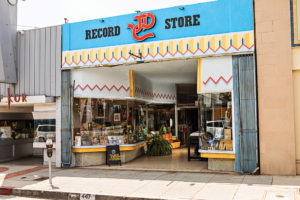 The couple started JDC Records’ label and distribution in a small building on a corner across from Fort MacArthur. They even opened a record shop on Pacific Avenue for a short time called Dance Music Forever. Dacie would only stay with the business for a year before letting Callon take the reins, leaving her to take care of the family, which would eventually grow to five children.

In 1983, lightning struck when JDC became the exclusive west coast distributor for New Edition’s smash hit single, “Candy Girl.” The success forced the business to move to a larger 7,000 square foot warehouse on Fifth Street, across from McNerney’s Mortuary.

“That’s when we morphed into this huge distribution company all through the eighties,” says Callon.

As the music industry started to go digital with CDs in the late eighties, it was the rise of hip hop and dance club DJs that kept vinyl, and JDC Records, relevant.

“Everything was going great until 1990,” says Callon. “That’s when vinyl died.”

The major record companies were forcing record stores to return all their vinyl albums and replace them with CDs. Vinyl sections were disappearing across the country as demand tanked. It was clear the music industry was going all-in on CDs and wanted to be done with vinyl.

“This was very disturbing to me because vinyl sounds better than CDs,” says Callon. “When the first CDs came out, I knew all the top guys in town — the engineers and mastering guys — everybody thought it wasn’t going to last. Well, the convenience of it [proved us wrong].”

THE RECORD SHOP
When JDC Records struggled in the nineties, the business bounced around the South Bay, settling in Hermosa Beach for a while. When Hermosa lost its charm, Callon returned to San Pedro in 2013, relocating JDC’s label and distribution business to a small warehouse in the downtown district. He would open the record shop three years later.

“The record shop has been open five years, and I still get people coming in saying, ‘I didn’t know you were here,’” he says. 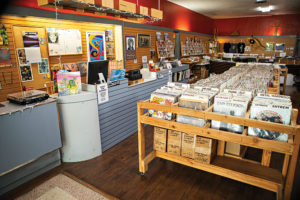 For music lovers, walking into JDC Record Store is like walking into a hug. Two rows of (mostly) new and (some) used vinyl albums take up most of the floor space, with cassettes, turntables, and various other related items displayed on the wooden slatwall shelves. The atmosphere is inviting, and the staff is always blasting great music. Also, as an homage to San Pedro’s notable punk history, the very first album bin you see as you walk into the store is the punk section, with, of course, a good selection of Minutemen albums.

“When the retail space in front [of the warehouse] became available, I thought, yeah, let’s do a record store again,” says Callon. “There’s so much interest in vinyl. This is the time to do it.”

Callon’s vinyl retail philosophy is simple. He makes sure to have as many of the best-selling albums in stock at all times across as many genres as he can sell. And if he doesn’t have what you’re looking for in stock, chances are he can order it for you. The shop’s prices are also competitive with other indie record stores in the South Bay. Customers can also order online at jdcrecordstore.com.

While the pandemic certainly hurt many local businesses, including JDC Records, Callon says his distribution business has taken off again now that the economy has opened up.

“All of the stores we sell to, especially in Southern California, they’re all buying our stuff again like crazy. We can’t even keep up with it,” he says. “Everything got really good again for us.”

Now that things are getting back to normal and family and friends are gathering again, Callon has gotten The Glass Family band back together and is currently working on a new album, tentatively titled Fifty Years Later, a follow-up to their debut record from 1968. 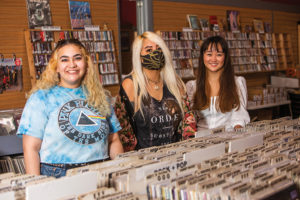 The band, made up of new and old members, has been practicing in the JDC warehouse for the past couple of years. The pandemic put a hold on things, but Callon says that after two years of writing and recording, the new Glass Family album will be out in three months, alongside a new third pressing of their debut album.

“We’ve had all these unfinished tracks and a lot of interest in the band over the past few years,” says Callon. “Our original album got repressed on vinyl and sold out of two pressings. The third pressing is coming again, and now we’re finally putting out our follow-up album.”

There’s something special about owning a vinyl album for Callon, aside from its superior sound quality. With the large cover art and liner notes, the physical nature of the media, and the fact that most vinyl collectors listen to the entirety of an album and not just a single track make the vinyl music experience unique to itself.

“When it comes to good music, the albums you really treasure, you want a vinyl copy of it,” says Callon. spt