A century ago, in February of 1921, the Harbor and Foreign Trade Committee of the Los Angeles Chamber of Commerce proposed to replace the names of Wilmington and San Pedro with Los Angeles Harbor. Their issue stemmed from the confusion surrounding shipping by sea. While San Pedro and Wilmington were technically part of the city of Los Angeles, the cargo would still be 20 miles away from its final destination when it arrived. And who was responsible for the cost of transfer between the docks and Downtown L.A.?

In the 1920s, Los Angeles was still figuring out what kind of city it was going to be. Big business had decided that industry belonged in the middle of the sprawling metropolis, 20 miles away from the city’s port. Twenty miles in the 1920s was a world away. San Pedro had its own federally recognized post office and telephone exchange. So, not only did businesses in L.A. have to pay for their freight to get delivered from San Pedro, but they also had to pay toll rates on phone calls to arrange for that freight to be picked up. Because of this cost and inconvenience, the L.A. businessmen thought it would be easier if San Pedro and Wilmington gave up their names, phone exchanges, and post offices. This action would mean a phone rate increase for all San Pedrans. The post office was a moot point because the government had already refused to make the San Pedro office a branch of the L.A. post office. 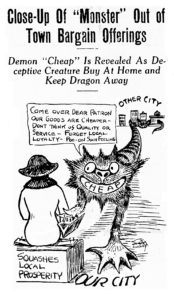 This cartoon by Jack Lindsley, “The Mysterious Cowboy Cartoonist,” was part of the “Buy in San Pedro and Greater Prosperity” campaign that ran in the San Pedro Daily Pilot from 1922 to 1923. The campaign promoted buying locally and highlighted local business owners with profiles and caricatures. (photo: San Pedro Daily Pilot)

Just as they did during consolidation over a decade before this issue, Wilmington community leaders caved to L.A.’s demands almost immediately. They announced that they would be okay with the name change and giving up their post office. After all, Wilmington’s Chamber of Commerce’s technical name at that time was the Los Angeles Harbor Chamber of Commerce. I should point out that the people of Wilmington, and eventually business owners, disagreed with their civic leaders.

The community of San Pedro was a united front on this issue. The L.A. Chamber had invited delegates from the San Pedro Chamber to a luncheon to discuss the issue. The San Pedro Chamber refused to send representatives because they had already made it clear where they stood on the subject — San Pedro’s identity was not open for discussion. While the costs of these changes would be prohibitive enough for people to disapprove of the proposal, it was the collective community identity that became the rallying cry for
San Pedro.

While the immediate shipping issue was eventually resolved by placing Los Angeles Harbor in parentheses after the town name, i.e., San Pedro (Los Angeles Harbor), interests in L.A. would continue to fight the issues of the telephone exchange and post office for two more years. The continued fight ultimately proved that the original complaint wasn’t rooted in shipping confusion at all. The consensus was that old-time L.A. businessmen were afraid that Los Angeles could never truly prosper if San Pedro and Wilmington were allowed to retain identities apart from the main city.

San Pedrans had thought they quashed this name erasure issue when it initially popped up in 1918. Instead, it became a five-year battle for community identity. Community identity became such a rallying cry for locals that it became a policy platform for politicians looking to secure the San Pedro vote. Local businessmen created progressive groups to boost small businesses and instill civic pride in the community. The newspapers began running town booster campaigns engaging the community to think about why community identity was so important to them and San Pedro’s future. Even the Women’s Club canceled their contract with Los Angeles businesses and promoted buying local. This concerted effort to boost San Pedro was happening as large housing tracts like Vista Del Oro were being built. For town leaders, the people who would fill these new homes would only strengthen San Pedro’s fight for a community identity outside of Los Angeles.

It’s hard to understand how close San Pedro came to losing its identity in the early 1920s, but the years-long battle was big enough to light a fire under the community to make sure that it would never happen again. I see this period as the birth of San Pedro’s signature pride. San Pedro shirts, stickers, tattoos, vanity license plates, email addresses, and social media handles are all thanks to some greedy L.A. businessmen thinking that their convenience was worth our erasure.

I hope this little story will make anyone think twice about San Pedro erasure to be different or technical. If your zip code is 90731 or 90732, don’t say you’re in Los Angeles. Put some respect on this century-long struggle. You’re in San Pedro. spt

If you are a proud San Pedran who would love to learn some local history, please join us Wednesday, March 24 at 7 p.m. for our next Heritage at Home presentation. This month, we will be reprising our launching event presentation, San Pedro History Basics. To participate, please email angela@sanpedroheritage.org.