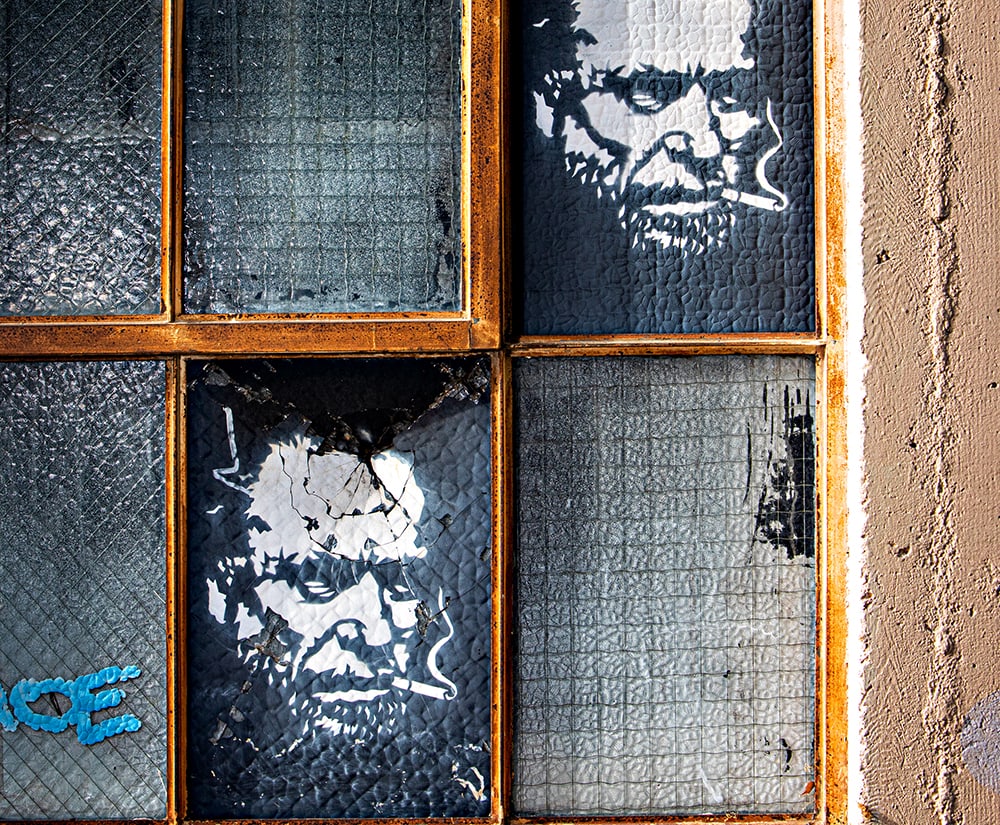 with research by Christian H. Lozada

Charles Bukowski’s decision to move to San Pedro in 1978 was strictly business. He needed both figurative and literal space from his old stomping grounds in Hollywood to get some of his most celebrated work completed. He also needed a tax write-off. And although his house on the hill made him somewhat broke again, at least he had equity and his beloved second-floor sanctuary where he could punch out his prolific prose.

This month, on August 16, we celebrate Charles Bukowski’s 100th birthday. For sixteen of those years, he wrote his heart out in his San Pedro home; books, short stories, movie scripts, and hundreds upon hundreds of poems. Bukowski wrote with an intensity for the brutal and beautiful honesty of life, and it is the legacy of his life’s work that we honor for his centennial. While he didn’t come here to write about San Pedro, the town couldn’t help but sneak its way into his heart and his art. Here are some poetry snippets of San Pedro, as seen through the eyes of L.A.’s most famous poet. 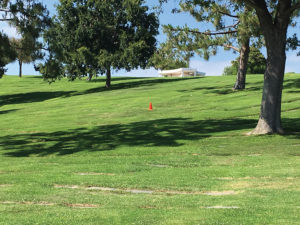 Excerpt: “the cemetery / on a long sloping green hill, / a very modern place with / the markers / flat on the ground, / it’s much more pleasant for / passing traffic.”

Green Hills is Bukowski’s final resting place. His flat bronze marker famously tells all his visitors, ”Don’t Try.” The modernity of the grave markers was something Bukowski took great notice of when he drove past Green Hills cemetery, mentioning it in a couple of his poems. Traditional cemeteries are filled with headstones of varying sizes and material. When work began on Green Hills in 1948, great care was taken for the cemetery to have the look of a park rather than a traditional cemetery, with trees, shrubbery, and the flat bronze memorials that were flush against the ground.

Excerpt: “I can take my pants / to the cleaners or / stand in a / supermarket line / without any / hubbub at / all”

Bukowski appreciated his relative anonymity in San Pedro, as opposed to his high profile in Europe. His market of choice was San Pedro’s local chain, McCowan’s Market, sometimes referring to it as the corner market. Michael Montfort, Bukowski’s longtime photographer and collaborator, captured the poet shopping at McCowan’s in one of his books. During Bukowski’s time in San Pedro, McCowan’s had three locations: 10th & Gaffey streets, 1st and Bandini streets and 20th Street and Walker Avenue, the latter being the final location to shut its doors in 2008. 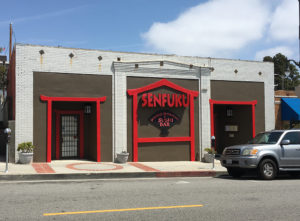 Bukowski’s love of local sushi restaurant, Senfuku, is pretty well known. The downtown eatery has been a longtime must_see for any Bukowski fan. Senfuku was established in 1974 by Rei Suzukawa as a traditional Japanese restaurant that specialized in sukiyaki, teriyaki, and tempura. It moved from its original location on Gaffey Street to its present location on 6th Street in 1974. In 1982, current owners Yoshimitsu and Helen Kikuchi brought sushi to Downtown San Pedro. According to the current owners, Senfuku loosely translates to “fan of happiness” (hence the fan on the facade) and is considered a symbol of good luck. 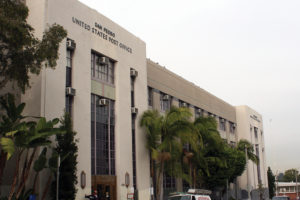 Excerpt: “I won’t go to the post office anymore. / (I got a p.o. box there where women send me nude photos of themselves along with their love / letters.) / anyhow, I try to walk in and there / are bums everywhere, / got the old hand out. / gave a guy a buck the other day while / I was going in and coming out he’s / got his hand out again.”

The Beacon Street post office is part of the federal building that opened in 1936 and also housed the customs house. San Pedro had been promised a federal building for so long that this building was the very first project on the list for President Franklin Roosevelt’s famous Works Progress Administration. Bukowski’s wife still maintains the post office box that the writer had during his lifetime. 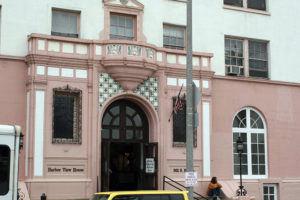 Excerpt: “there is a madhouse near the post office / where I mail my works / out. I never park in front of the post office, / I park in front of the madhouse / and walk down. / I walk past the madhouse. / some of the lesser mad are allowed / out on the porch. / they sit like / pigeons. / I feel a brotherhood with them. / but I don’t sit with them.”

The Harbor View House was an outpatient mental health care facility that had been occupying the old San Pedro Army and Navy YMCA building since the mid_1960s until last year when the building was sold to a private developer. Many longtime residents of Harbor View House had become familiar faces around downtown. Future plans for the 1925 building include luxury apartments, a cafe, gym, and underground speakeasy. 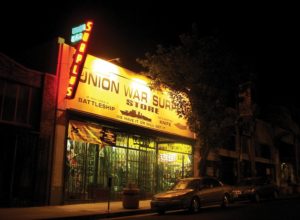 Excerpt: “my wife is more apprehensive than I am / and we were in a surplus store / poking around when / my wife said, “I want two gas masks.” / “gas masks?” / “yes, there are all those storage tanks nearby and if they explode there is / going to be nothing but flame and / gas!”

Union War Surplus was established in 1946 by brothers Ira and L.R. Kaye with their cousin Irving Robinson. The store boasted to have “everything from a battleship to a hunting knife,” and if they didn’t have it, they would get it. The Bukowskis gave the store a bit of a challenge later in this poem, asking if they had gas masks for cats, and the clerk begrudgingly had to admit that they did not carry them. The beloved local store closed in 2009. 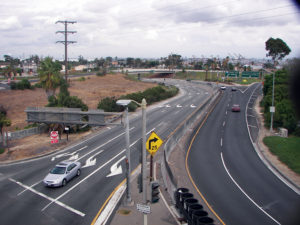 Bukowski wrote often about the freeway, the thing that brought him to San Pedro but still kept him connected to his past, as well as his beloved racetrack. When the Harbor Freeway was created, it initially ended at Channel Street. In 1970, several years before Bukowski’s arrival, the freeway was extended, and Gaffey Street became the new terminus. This massive undertaking to add a couple of miles to the Harbor Freeway included condemning/moving homes and cutting a path through an entire hillside. This also changed the nature of Gaffey Street and created a new commercial corridor for the town. 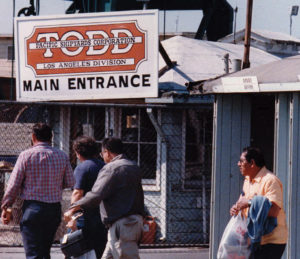 Fish canning in San Pedro started in the second decade of the twentieth century and hit its peak in the harbor during the post_World War II fishing boom. San Pedro had two household name tuna companies in the harbor, StarKist and Chicken of the Sea. They all eventually followed the fish south. Todd Shipyard took over operations of the Los Angeles Shipbuilding & Drydock Corporation after the Navy seized the shipyard in the midst of World War II. Government contracts kept Todd Shipyard going for decades after the war, while some of their private projects included vessels for Disneyland. Unfortunately, the company chose to shutter operations in San Pedro in the mid_1980s and hundreds of local workers were laid off.

Excerpt: “it’s been a world full of the brave / and I love them all / as outside the / Vincent Thomas Bridge arcs in the dark / holding, just now, the luck of us all.”

The Vincent Thomas Bridge opened to traffic in November of 1963. It is named for San Pedran and state assemblyman Vincent Thomas, the man who pushed for the bridge for 15 years. The advent of container shipping and the need to transfer the containers from the ship to their destination via rail and trucks made Thomas prescient and his detractors foolish. Prior to the bridge, the only connector between San Pedro and Terminal Island was a ferry. Since its construction, the Vincent Thomas Bridge has become one of San Pedro’s most iconic landmarks. 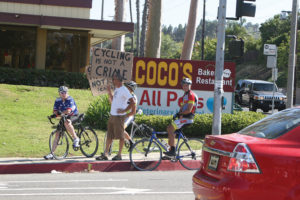 COCO’S BAKERY RESTAURANT
Stuck With It

Bukowski became a senior citizen while living in San Pedro and writes several poems about the aging scene at local restaurants like Coco’s and Sizzler on Western Avenue. Neither restaurant exists as Bukowski experienced it, but his observations capture a time and community that most people don’t pay much attention to. Initially, he seems to write as an outsider looking in, younger and foreign to San Pedro. Here, he fully embraces his age and his fellow seniors. spt