Ninety-six years later, on Saturday, May 8 at Los Angeles Valley College, the Pirates finally captured their first CIF-Los Angeles City Section championship in that sport, as they scored a team-high 392 points to outdistance themselves from runner-up Granada Hills Charter (273), Cleveland Charter (265), and perennial power Palisades Charter (259).

“This marks history,” San Pedro junior captain Willie Hatch says. “The way how our team faced adversity and persevered made hoisting up that trophy such an amazing feeling.” 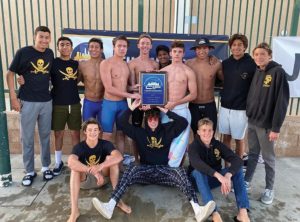 “I feel ecstatic about the win,” says Sharon Frazier, SPHS head swimming coach. “This was a huge victory for our program.”

It was also a huge breakthrough for the school after football and girls volleyball both reached CIF-LACS finals in the fall of 2021 only to come up short.

The key moment in the finals meet was the winning 200 freestyle relay race when senior Joshua Jones, followed by the junior trio of Hatch, Max Sorich, and Nick Jones, stroked their way to a winning time of 1:28.1 (dropping nearly three seconds) to break their previous school record.

Hatch, Sorich, Nick Jones, senior catcher Finley Kircher, and senior girls captain Cate Russo represented the Pirates in the CIF State Meet in Fresno on May 13-14, and while there, the boys’ quartet of Hatch, Kircher, Sorich, and Nick Jones once again broke a pair of school records in the 200 and 400 relays.

According to Frazier, the team’s success is built upon numerous factors. “Most of these boys have been swimming together since they were in elementary school,” she says. “All these years, they have been working hard, both in the pool and outside the pool. The boys varsity swim team at San Pedro High School also has the highest grade point average of all of the spring sports in the Los Angeles Unified [School District].”

Frazier continues, “We also have amazing parental and community support. All these factors put together made us a championship team.” spt