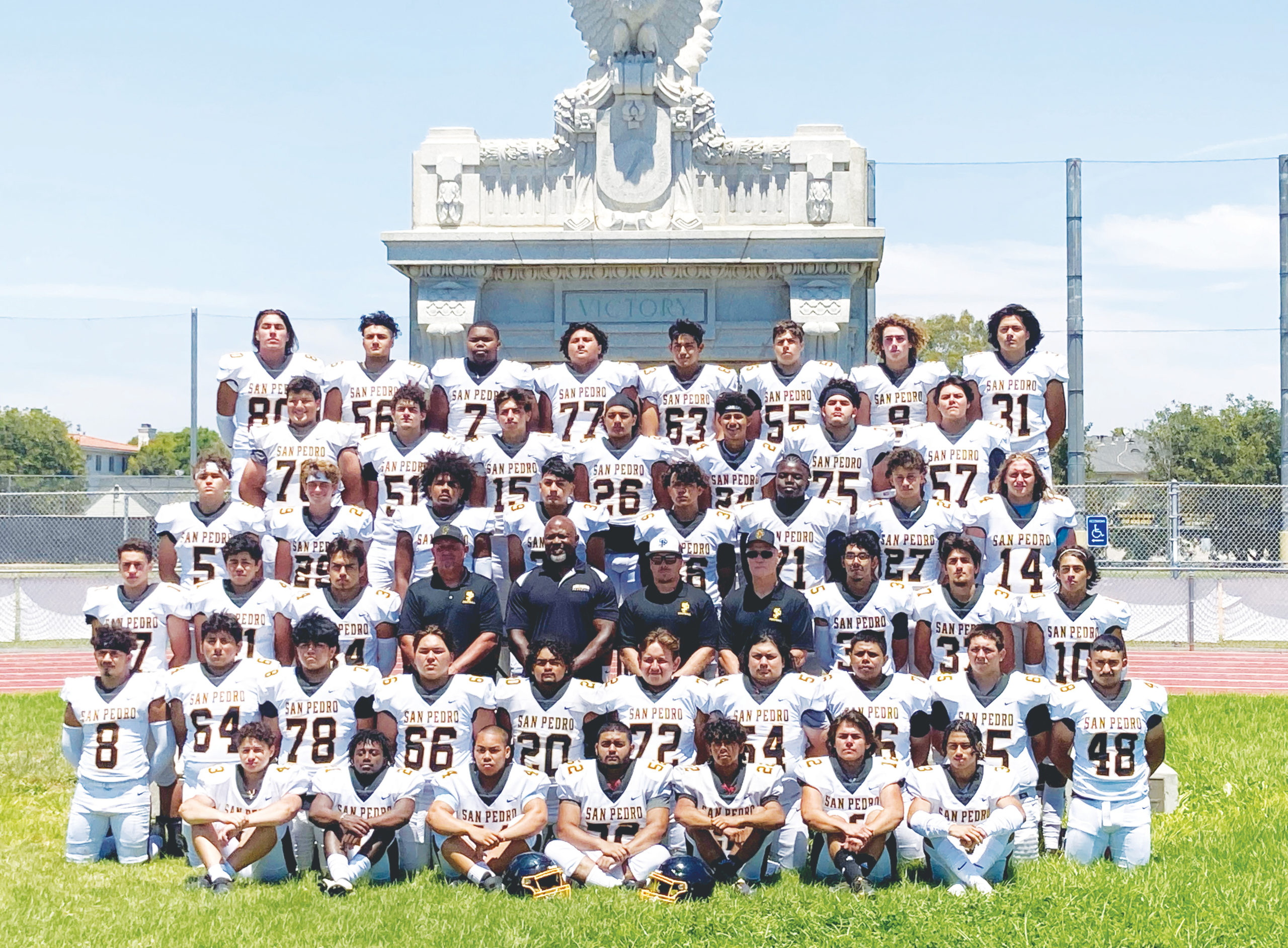 Due to adjustments made on the fly thanks to the coronavirus pandemic, San Pedro prep football fans got just an appetizer of what to expect this past spring. Now it’s time to unleash the main course.

Thursday, August 19, marked the start of the traditional high school season when San Pedro High football battled St. Anthony of Long Beach at St. Pius X/St. Matthias High in Downey and Mary Star of the Sea High hosted Marshall of Los Angeles in a pair of intersectional openers. (Ed. note: The magazine went to press before both games were played.)

Both teams are planning on spreading the love offensively.

The Pirates showed their high capability of making plays in their two-game spring season in mid-to-late April, piling up 119 points. In Mary Star’s final of three spring games against Harvard-Westlake, the Stars scored the game’s final touchdown in a 35-7 loss with a short touchdown run, running a variation of the spread offense on the final drive.

There’s plenty of excitement despite the looming uncertainty of things still abounding in the pandemic era to be had. Here’s a preview of both schools as they pursue league titles and beyond.

Are you ready for some football again?

Miller has a bevy of playmakers returning for the fall, as San Pedro has most of the top talent returning as one of the teams to be on the lookout for in the CIF-LACS Open Division title chase.

Senior quarterback Aidan Jackson was bullseye with his pinpoint accuracy once he got the protection he needed from an athletic offensive line. He has three reliable targets to choose from in a trio of senior wideouts: the explosive Robert Sarmiento, physical Kejuan Bullard, and the steady Chris Nixon, all of whom are a serious threat to make regular house calls to the end zone.

And then there’s an even larger target in the form of 6’4″, 275-pound junior TE/DE Nicholas Fernandez.

Sarmiento also handles the PAT and field goal kicking duties and hits hard in the secondary for the Pirates.

San Pedro runs a variation of the pistol offense now, which still makes the running game a problem for opposing defenses. Shifty senior running back Christian Phillips and bruising junior Roman Sanchez will get their fair share of handoffs from Jackson.

Defensively, the Pirates have even more talent to be wary of with Fernandez, Bullard, Nixon, junior linebacker Makani Konopka, and senior WR/LB Elijah Thorp.

San Pedro’s nonleague slate will feature two CIF-Southern Section battles with St. Anthony and Lakewood, a reunion of an old Southern Pacific Conference rivalry with Dorsey of Los Angeles, and the September 2 showdown at Venice, which will be an early barometer of how the Pirates stack up against another City Section Open Division title hopeful.

The most important game on the schedule is the Marine League opener on October 1 at home against Harbor Area neighbor Banning of Wilmington, as that could potentially determine the Marine League championship. However, the Marine is still one of the most dangerous leagues in the City Section, so the Pirates know they must bring it every night.

The Stars will be competing in the Del Rey League for the first time in a fall season, as they will be looking to make their first year of playing home games on campus worth it.

Senior RB/LB Giovanni Boccanfuso is the top returning player for Mary Star, but plenty of shine is increasing on these Stars.

With the spread offense now becoming a thing in this town, Mary Star will rely on sophomore quarterback Santiago Martinez to be the ringleader as fellow sophomore Luka Fiamengo chose to focus on basketball. Martinez will have options when the Stars do decide to take to the air.

Senior Steven Ceniceros only played one game during the spring after transferring from perennial power St. John Bosco of Bellflower but has the speed and vision downfield after the catch, which will make him difficult to deal with. Another St. John Bosco transfer in senior tight end Matthew Oakes, and junior Vincent Guerrero is another reliable target.

Senior running back Nathan Chavez returns for Mary Star after missing all spring season due to a concussion. Chavez ran for 18 touchdowns on the junior varsity level in 2019 during his sophomore year. Senior Joe Spaleta will be an anchor up front on both lines, and all the PAT and field goal duties will be handled by a true athlete in senior Maddie Purves, who helped the girls soccer team reach the CIF-Southern Section Division 7 semifinals this past May, garnering an All-CIF Division 7 selection.

The Stars’ nonleague slate has two South Bay battles with Torrance (away on September 10) and El Segundo (home on September 24), while they will be battle-tested in the Del Rey League battling the likes of Harvard-Westlake, St. Anthony, La Salle of Pasadena, and Salesian of Los Angeles in order all in October. spt