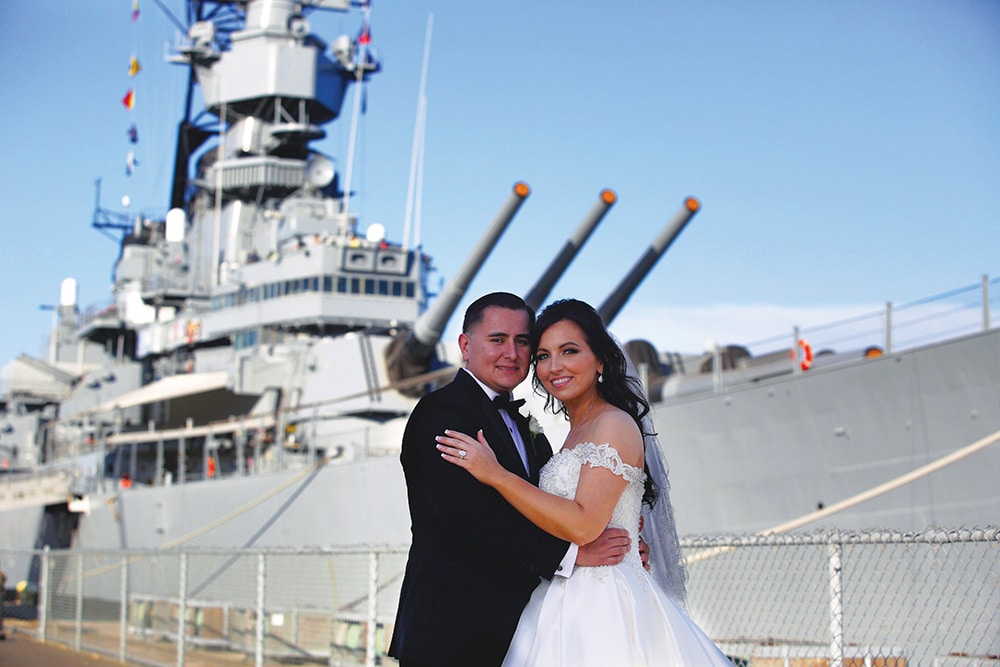 Who would have guessed that a trip to L.A. Fleet Week would end in wedding bells? That’s exactly what happened for Elena and Logan Villareal, who met on Labor Day in 2016.

Logan Villareal was born and raised in Texas, but at the time he met Elena Daser, he was serving in the United States Marine Corps, stationed at Camp Pendleton, and was assigned to work L.A. Fleet Week. 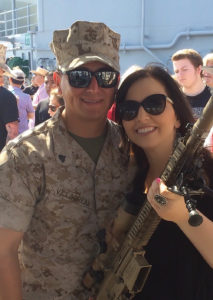 “My mom had asked me if I would go with her to see the ships that came to the Port for Fleet Week,” remembers Elena, a San Pedro native. “We toured all around and our last stop was the tour of the USS America. I noticed one booth that had huge weapons on display. I wanted to take a picture and send it to my brother-in-law. So I walked over and asked one of the Marines if I could take a picture. That Marine was Logan. He was giving a weapons and body armor demonstration. After we took our picture, we talked for a bit, and I continued the tour with my mom. As we headed to the door to leave, Logan was standing at the exit waiting for me. He said he had a great time talking to me and asked me for my phone number. We started dating and have been inseparable ever since.”

In December of 2018, after two years of dating, Logan proposed. “I was sitting on the couch having a cup of coffee when our little dachshund, Pepe, came out from the other room wearing a tuxedo with an engagement ring tied to it,” recalls Elena. “Logan was on one knee and said, ‘I love you, and I want to spend the rest of my life with you. Will you marry me?’ Of course, I said yes!”

The groom had been planning the proposal with Elena’s mom, Rosemarie, who owns Captain’s Treasure Chest Jewelry in San Pedro. “When Logan asked my mom for my hand in marriage, he also asked my mom and sister for advice on creating the most beautiful ring for our engagement,” says Elena. “Including Pepe in the engagement was the perfect touch.”

Elena and Logan were married on October 19, 2019 at Mary Star of the Sea Church, with a reception that followed at Trump National Golf Club. Close friends and family gathered to celebrate the couple, including all of Logan’s family, who traveled from Texas.

“They had such a great time being introduced to all our Italian traditions,” recalls Elena. The bride was attended by her sister, Erica Mendoza, who served as maid of honor, and bridesmaids Sarah Kreager, Lauren Mancini, Bianca Sementilli, Madelyn Villareal, and Kristina Robba. Logan’s best man was his brother Cody Villareal, and his groomsmen were Lucas Mendoza, James Rasmussen, David Hatter, Isai Sapien, and Johnny Chessher. Jacob Villareal and Sophia Aguilar served as ring bearer and flower girl, respectively.

After serving in the 3rd Battalion, 5th Marines in the United States Marine Corps, Logan decided to stay in California and attend the Los Angeles Police Academy. He is now an officer with the Los Angeles Port Police. Elena is a 5th grade teacher at South Shores Magnet School for the Visual and Performing Arts. The newlyweds plan to travel (with their first stop in Hawaii for a well-deserved honeymoon). As avid Dodgers fans, the couple looks forward to going to many games, hopefully with children of their own in the not-so-distant future. spt