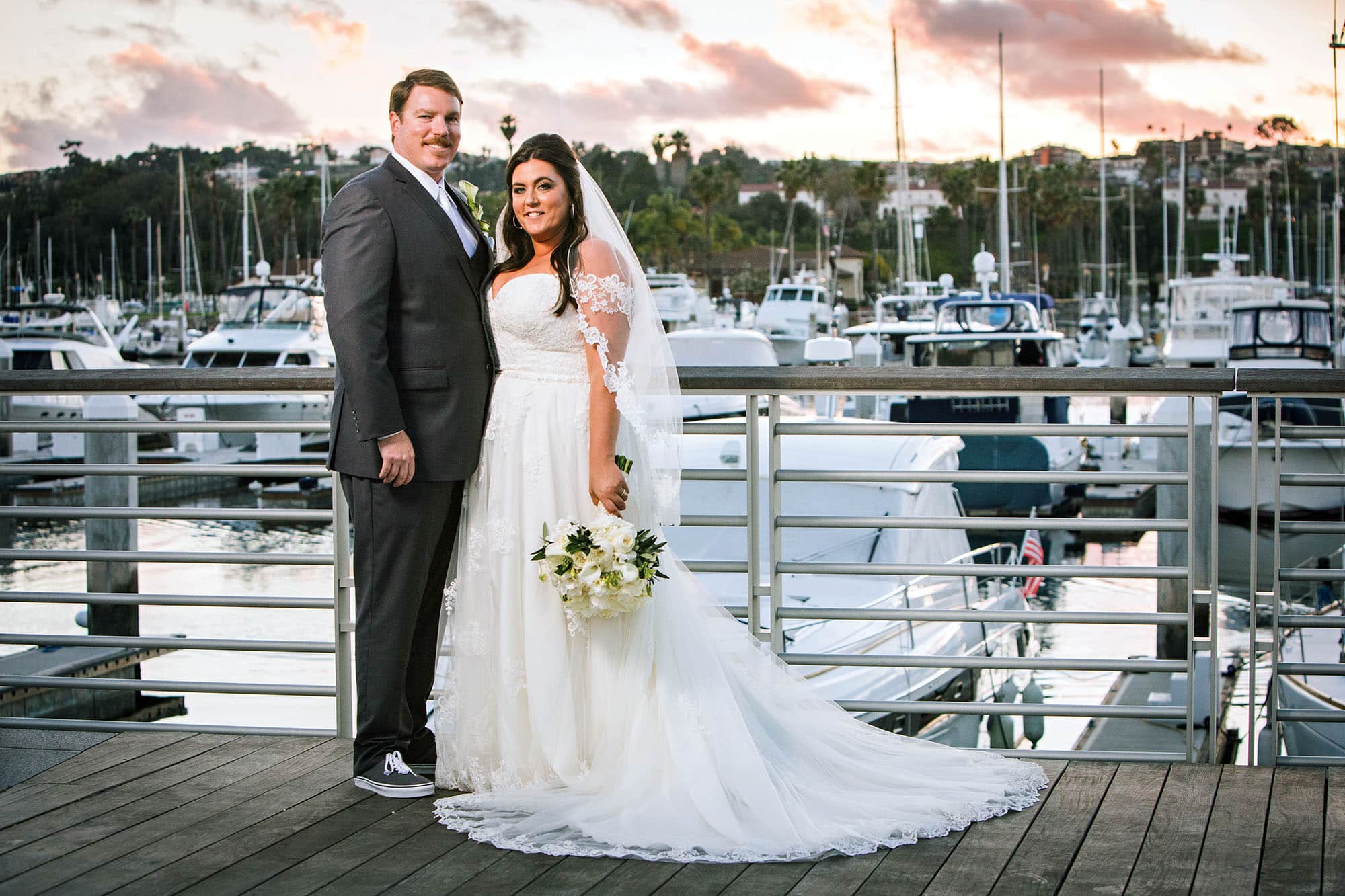 In Greek mythology, Eros was often a mischievous matchmaker of couples throughout history. For Matt and Alexis (Boerger) Prideaux, perhaps the winged god of love had a hand in bringing these two together.

Born and raised in San Pedro, Matt and Alexis met in their early twenties through mutual friends. While maintaining a friendship for nearly a decade, it later evolved into romance on New Year’s Eve 2014. “We both attended a party at Terranea Resort with a big group of friends,” Alexis recalls. “After ringing in the New Year, and a lot of champagne, I think we were both really surprised to have shared our first kiss.”

After that memorable midnight, the pair became an item, and their individual personalities complemented one another perfectly. “I am totally a city girl and love activities, while Matt is more of a homebody,” says Alexis. However, their relationship has brought out the best in one another, and they have evolved to appreciate and embrace their similarities, as well as their differences. “We do have different hobbies and interests, but we both love to travel, listen to music, and hang out with friends and family,” says Matt. Both diehard fans of the Los Angeles Lakers, in addition to attending games together, the couple also enjoyed a great deal of exploring, with notable trips including Croatia and New York City.

Being of Greek heritage, Alexis introduced Matt to her family’s homeland in 2017. “My family is from the island of Kefalonia, and I grew up spending summers there,” explains Alexis. “I brought Matt there to share with him the magic of my family’s beach village of Skala.” The couple enjoyed their trip so much that Matt (or “Matheos” as his Greek vacation alter ego is called) and Alexis returned to Greece the following year. “It’s probably cliché to say, but it feels like all of the vacations we have been on together have been memorable, says Alexis. “Wherever we go, we make the most of it and have a lot of fun together.”

After four years of dating, on April 8, 2018, Matt chose to pop the question on a meaningful holiday, the Greek Observance of Easter, when Alexis’ family and friends celebrate annually with a lively spanakopita-filled gathering at Portuguese Bend Club in Palos Verdes. “I knew what her answer was gonna be, so that wasn’t too concerning,” Matt humorously recalls. “[But] I was nervous to do it in front of so many people, so I convinced her to go for a walk with me. Once we were away from the crowd, I dropped to a knee.” Naturally, a crowd filled with family and friends was nearby to observe the special moment. Matt describes, “Alexis seemed extremely surprised, and once I stood up to give her the ring, everyone cheered.” And speaking of the ring, Matt had the bauble custom designed with his bride in mind. “While we were dating, I had once drawn out a ring on a paper towel as a joke,” explains Alexis. “Matt secretly kept the paper towel and took it to a jeweler to have designed.”

On February 9, 2019, the couple tied the knot with a traditional Greek Orthodox ceremony at Saint Katherine’s Greek Orthodox Church in Redondo Beach in front of 285 guests in attendance. The unique and spiritual ceremony included the traditional wedding crowns joined by a ribbon called stefana, which symbolize the honor of their union by the blessing of God and their unity as a couple. Their stefana also holds special meaning, as it was also used on Alexis’ grandparents wedding day. “I was very close to my grandparents, especially my grandfather who was my best friend and played a pivotal role in raising me,” Alexis shares. “So, it was an amazing way to honor them and feel their presence on that day.”

Following their ceremony, the Greek celebrations continued at their reception, located at DoubleTree by Hilton Hotel in San Pedro. Tones of navy, white, and gold were incorporated into the overall décor, as well as symbolic olive branches. Guests were treated to an evening featuring an extravagant homemade dessert table, a chic outdoor lounge and cigar bar, and of course, lots of dancing. Matt and Alexis had their first dance as a married couple to the classic “Be My Baby” by the Ronettes, and in a nod to the bride’s honored heritage, traditional Greek music and dances were also featured.

“Matt learned a zeibekiko [traditional Greek dance] that definitely impressed all of the Greek attendees!” laughs Alexis. Special touches included favors of a donation to breast cancer research in honor of the newlyweds’ mothers, whom are both survivors, as well as the traditional Greek satchel of Jordan almonds called koufeta. The reception also welcomed the arrival of the King himself – Elvis! Videographer Domenic Bologna surprised the couple with a special impersonator performance in full costume, which was certainly a highlight of the evening.

“It was an awesome night!” Matt says happily. “We were blessed enough to share the moment with a lot of family and close friends, and I could really feel how genuinely happy everyone was for us. Feeling all the love and well wishes for us that day is something that I’ll never forget.” Looking back on the big day, Alexis fondly shares a similar sentiment, saying, “The very best moment for me happened when we were sitting at our sweetheart table. I realized I just married the man of my dreams, and then looked up to see every single person I love and deeply care for were, for one magical day, all in the same room. It was so overwhelming.” She adds, “To be surrounded with such pure joy and love, I’ll be forever grateful.”

In the spring, the newlyweds later enjoyed a relaxing honeymoon in Tahiti, Moorea, and Bora Bora, where they explored pineapple plantations, swam with sharks, and soaked up picturesque days on the beach. The couple looks forward to many more adventures together, both in travel and in life. “Matt is my best friend and the most amazing life partner,” says Alexis. While Matt adds, “I can’t wait to see the world with her, grow the bond and love that we share, and start a family together.”

Matt and Alexis currently reside in San Pedro. Matt is an inspector with Operating Engineers, working on the Los Angeles Stadium and Entertainment District, and Alexis is the founder of independent media consulting practice, Orion Consulting.