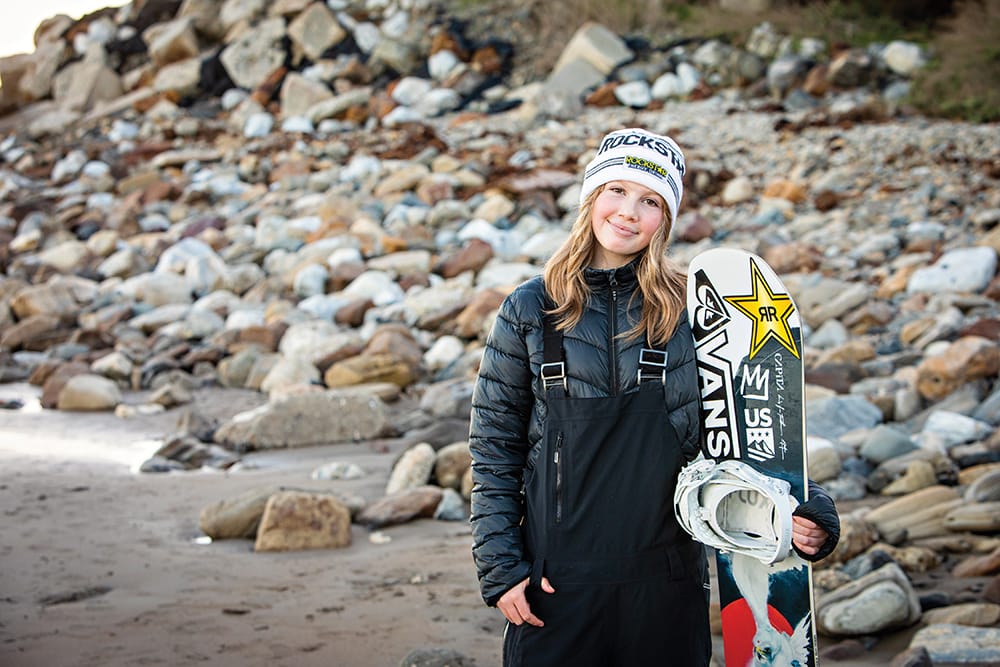 Sonora Alba is one busy teenager.

It’s an unusually warm Saturday in early February, and the 14-year-old pro snowboarder and San Pedro native, fresh off the heels of her X Games Aspen debut a week earlier, is enjoying some downtime with her parents, Karah and Rudy, outside of Sirens Java & Tea. In a few weeks, Sonora, who prefers the nickname Sonny, and her family will be heading back to Colorado for back-to-back contests on the U.S. Revolution Tour. But right now, all this teenager cares about is hanging out with her cousins during this short break.

“I don’t have too many friends. My cousins are my friends. I have a lot of cousins,” she says, laughing. 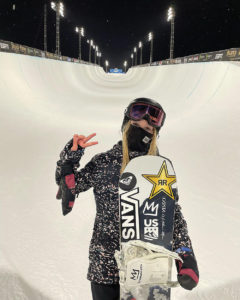 Even though she’s been competing on the amateur circuit for years, Sonny recently caught the attention of her hometown during her nationally televised X Games contest, competing in the Monster Energy Women’s Snowboard SuperPipe. Photos and videos of her in action rippled through various local social media channels. Many cheered her on and proudly pointed out her name on the chyron with “San Pedro, CA” displayed underneath it. The enthusiasm was a reminder that it’s been a while since the town had a local pro athlete it could rally behind.

The event, her biggest contest to date, caps off an exciting 12 months that saw her move from the amateurs to the pros with a big win at the Burton U.S. Open Junior Jam, leading to an invitation to become the youngest current member of the U.S. Snowboard Team. Did I mention she’s just 14?

FEARLESS
When she was three years old, Sonny jumped off a 20-foot pier into the ocean while visiting Catalina Island. Her mother realized then that her daughter was fearless.

“Her brother, Kai, is 10 years old, and they couldn’t be more different,” explains Karah. “One of my things I would always say about Sonny is that when she learned how to walk, she ran away from me. And when Kai learned how to crawl and walk, he crawled up my leg. She never looked back. This was her personality.”

With a thirst for excitement already brewing at a young age, Sonny’s parents introduced her to snowboarding during family trips to Big Bear and Mammoth mountains starting when she was three years old. 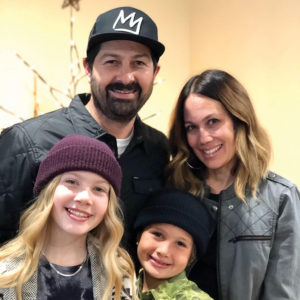 “My dad took me to Big Bear when I was really young, maybe like once a year, and then I started going more and more throughout the years,” recalls Sonny.

An avid skateboarder and surfer too, locals started noticing Sonny’s talent when she appeared as the only girl on the halfpipe with the older kids during the annual San Pedro Shred: Festival of Skate event that ran from 2013-2017. At maybe three and a half feet tall, decked out in the required helmet and pads, she was skating circles around boys twice her age.

“I was so intimidated. They wouldn’t let me drop in,” remembers Sonny.

“She’s always been like that,” says Karah. “I would credit her [fearlessness] as one of her strengths that really sets her apart. Of course, [she has] the natural talent and stuff, but I always feel like sometimes you have to have those extra other things… no fear, the passion, all those things have contributed to her success.”

EARLY START
While skateboarding and surfing are more convenient sports to pursue while growing up in San Pedro (she won a couple of early skateboarding competitions), Sonny knew at a young age that her passion was snowboarding.

“Well, I do go surfing and skating, but I feel like snowboarding is my passion. I have so much more fun doing it than all the other sports,” she says. “I was just better at it, [and I like] learning more tricks and just getting that serotonin and stuff when doing it.”

Sonny’s training paid off when she was selected to Mammoth Mountain’s Elite Snowboard Team three years ago. Described as a team with “the highest caliber athletes who have the skill, attitude, maturity and work ethic of an Elite Athlete,” the Elite Team’s training was intense and focused strictly on competitions and routine development and was the next rung on the ladder towards earning her pro status. It also required a lot of time and travel.

The team’s five-day training schedule, which meant having to make the five-hour drive back and forth from San Pedro to Mammoth Mountain every week, was something the Alba family had to get used to.

“It was a Wednesday through Sunday [schedule],” remembers Karah. “We would leave Tuesday for the five-hour drive to Mammoth… and we would come home Sunday night. It’s been a lot of driving.” 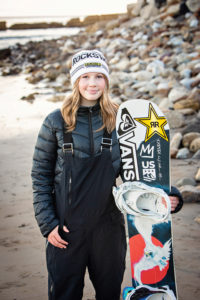 Between a busy training schedule and a competition calendar that had the Albas traveling around the world, it was clear Sonny’s schooling was going to be impacted. Knowing their daughter was on her way to becoming a professional snowboarder, the Albas decided to homeschool Sonny after she graduated from the fifth grade at South Shores Elementary School.

“[South Shores] was awesome in supporting her because she would miss a lot of school,” says Karah. “But when she made that transition into middle school, it was just too hard. So, we found an online program, and she has an online teacher. She’s in eighth grade now, but she’s an excellent student. She’s already taking high school courses.”

When asked if it’s been challenging to balance school, training, and competing, while also spending a fair amount of time on the road, Sonny concedes that it’s not easy.

“I train so much each day because I start snowboarding at 8:30 a.m. and end at 1 p.m. And usually, I trampoline after that for like three hours. Then I come home and do schoolwork. So, it’s a little late. But if I went to school [in person], I think that would be even harder for me. Homeschooling is easier [to manage] and more steady.”

GOING PRO
Last season was a big one for the San Pedro snowboarder.

In early February 2020, Sonny competed at Dew Tour 2020 in Copper Mountain, Colo., marking her biggest competition at the time. Later that month, at only 13, she won the Burton U.S. Open Junior Jam in Vail, Colo. with a score of 75.00, earning her a spot in the main contest where she placed ninth out of 13 in the women’s halfpipe semi-final.

These appearances led to Sonny being offered a spot on the 2020-2021 U.S. Snowboard Team last April, where she’s one of only four on the women’s halfpipe pro team.

“At 13, she was the youngest to join,” says Karah. “We got the call in April, and we knew, just from her success, that this was eventually a path. We believed that she would probably join the rookie team first, but we got a call in April asking her if she wanted to join the U.S. Snowboard Team.”

For Sonny, her quick success has been an almost surreal experience. In just a few short years, she’s gone from being a fan of snowboarding giants like Chloe Kim and Maddie Mastro to becoming teammates with them on the U.S. team. She’s now found herself competing with her heroes.

“Yeah, it’s so crazy. I’m competing against the best girls in the world right now,” she says. “I’m like, ‘Oh my goodness. What is going on?’”

Karah says the U.S. Team plans to help develop Sonny’s talents at this early age in the hopes of having her qualify to compete in the Winter Olympics, either in Beijing next year, or more likely, in Milan, Italy, in 2026.

“If she does have the opportunity to go to Beijing, she’ll be the youngest snowboarder to ever go to the Olympics,” says Karah, “because you have to be turning 16 that year. So, she’ll be 15, turning 16 [that] July.”

“I definitely want to go to at least three Olympics,” adds Sonny. “And more than that.”

Turning pro also means the opportunity for sponsorships. It’s no secret that snowboarding, like most snow/ice sports, is expensive to keep up with. Boards, snow gear, gloves, goggles, travel expenses — all of it adds up — so any kind of corporate sponsorship to help lighten the financial burden is welcome. Fortunately, companies like Rockstar Energy Drink, Roxy, Vans, CAPiTA Snowboards, and Flux Bindings have all noticed Sonny as a rising star with Olympic potential and have offered their support.

“We’re very lucky that all of these companies reached out to [Sonny] and saw her potential,” says Karah. “They believe in her, even though she hasn’t accomplished much in the professional world. They help with financial and travel support, exposure, and of course, gear.”

TEEN BEAT
When not crisscrossing the globe competing or driving back and forth with her family from Big Bear or Mammoth, Sonny tries to maintain a normal 14-year-old life. She loves watching anime, hanging out with her best friend and cousins, eating, and skateboarding at Peck Park.

“I love hanging out with my family because I never get to see them how I used to,” she says.

Sonny has found a common bond with her best friend and fellow snowboarder, Bea Kim, a teammate on the Mammoth Mountain Snowboard Team from Rancho Palos Verdes.

“The girls really connected,” says Karah. “And then the next thing you know, they live 10 minutes away from us. So, [the Kims] became like family. She’s about six months younger. They really do support each other, so it’s kind of nice that they’re in it together.”

“We’re not weird when it comes to competition. We support each other,” adds Sonny. “It’s nice to always have her. We hang out at Mammoth. I see her every day; then I go to her house every day in Mammoth. And when we come back to L.A., I hang out with her here, too.”

Back home in San Pedro, Sonny’s father, Rudy, is both proud and humored by his daughter’s success.

“I would say it’s fun to watch, and I just want to see her be successful,” he says. “I love it. It gives me something to do other than work.”

When asked if she feels any pressure to win now that she’s competing at the top level at such a young age, Sonny expresses confidence and humility.

“I don’t feel pressure because I want myself to succeed,” she says, “and just get better and progress even more. My team said they have no pressure on me. They just want me to do well and have fun. I definitely want to get better though and work hard every day.” spt