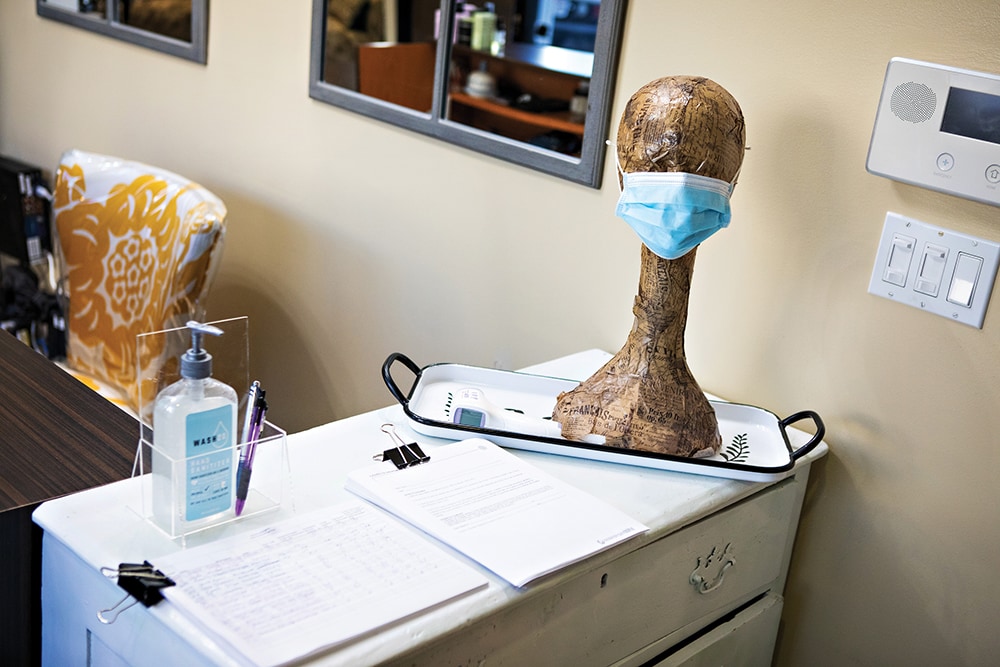 Phase III: The Cost of BeautyAs the state allows hair salons to reopen, local owners go above and beyond to make sure their clients’ return is a safe one.

Editor’s note: The reopening of Los Angeles County continues to evolve. Please check covid19.lacounty.gov for the latest information on which types of businesses are reopening.

Subterranean Hair’s Mitchel Wilson was in the middle of servicing his first client since the coronavirus pandemic shut his business down in mid-March, when an LAPD officer walked into his Downtown San Pedro salon and said, “[You should] board up and go home.”

It was Tuesday, June 2, and protests had erupted across the nation after the May 25 police-custody death of George Floyd, a 46-year-old Black man, who was killed in Minneapolis, Minnesota, after being arrested for allegedly using a counterfeit bill. Some protests devolved into riots in various parts of Southern California just a few days earlier, including Santa Monica and Long Beach, and word was spreading on social media that there was going to be a protest in Downtown San Pedro that afternoon.

With fears of more riots and looting coming to San Pedro, LAPD Harbor Division officers were encouraging downtown businesses to close up and board their windows as a cautionary measure.

“We had put so much anticipation and preparation [into our reopening] to then be told, ‘Hey, you guys need to close up and go home right away.’ That was devastating,” says Wilson, who opened Subterranean with his wife Rosemary in June 2019. “Literally, my client is sitting in the chair getting his haircut, and he’s like, ‘Should we stay, or do we go?’”

Heeding the LAPD’s advice, the Wilsons closed Subterranean after their first client that day and remained closed for the rest of the week. Fortunately, that protest, and the subsequent ones that followed, were all peaceful, and San Pedro avoided becoming a target for looters.

As June draws to a close, the threat of more civil unrest seems to have subsided for now. Downtown San Pedro has reopened again, and the Wilsons, along with every other hair salon owner in town, are facing a new challenge: how to open and maintain a hair salon in the time of coronavirus. 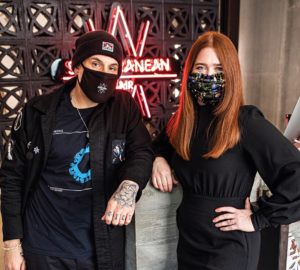 When asked about his feelings on reopening, Wilson answers with one word, “Trepidation.” He reveals that he falls into the high-risk category for COVID-19 due to previous health issues. The husband, father, and small business owner understands the risks he’s taking for himself and his family by reopening, but he’s also confident that his attention to detail and training as a stylist will not only protect him but also his clients.

“I have an autoimmune disorder [and] liver disease. So, I think that initially, I was afraid [of reopening] a little bit,” he says. “But on that exact same token, both my licenses prove that I’m licensed to prevent the communicable spread of disease. That’s what a barber license or a stylist license is for. It’s not a proficiency test. It’s to make sure that you’re safe at all times… The Department of Consumer Affairs licenses us to make sure that when I’m using sharp tools, chemicals, and everything else under the sun, you are protected.”

DISCOVERING THEIR ROOTS
It was the closure heard ‘round San Pedro.

When hair salons were deemed a nonessential business and were forced to close in mid-March in response to the pandemic, a collective gasp could be heard across the port town.

“I was nervous because I didn’t know how long we’d be closed,” recalls Cinde Car, owner of Hairline on North Gaffey Street. “I never thought we’d be closed [for] over two months. I felt helpless.”

Few things can send this town into a panic. Closing our hair salons for nearly three months came really close. By the end of April, a month and a half into the pandemic, many people started resorting to desperate measures in order to maintain some form of decent outward appearance. At-home haircuts started to become a thing. Sales of at-home hair coloring kits reportedly soared, with some local salons even selling their own kits for curbside pickup. It certainly wasn’t the same as having it professionally done, but for those who couldn’t go another day with their real hair color showing, it would suffice.

“Do you know how many repair jobs we have coming up?” laughs Wilson. “Seriously. Almost every client [we’ve had since reopening] sits down and apologizes. You’re going, oh man.”

San Pedro’s salon culture runs deep. Even in this digital age of social media, some of the most important social interactions happen within the walls of this town’s many hair and beauty establishments, some of which have been around for decades. Car, for example, opened her first salon in San Pedro in 1980 and is celebrating forty years in business this year.

“I’m very excited to be back working,” says Car, who currently employs a staff of nine at Hairline. “Being a hairdresser, I’m very social. Being in isolation was hard.”

Kim DiLeva, owner of C’e La Luna Salon, which will be celebrating its 25th anniversary this October, couldn’t wait to get her doors open, even if she admits, it won’t be the same as it was before.

“I’m happy that we are able to reopen in some capacity for the sake of our business and livelihood and that of our workers,” says DiLeva, who manages a 12-person staff. “However, it’s definitely not the same due to all the restrictions.”

FOLLOWING THE RULES
The protocols for getting hair salons reopened safely are incredibly thorough and will require an extra amount of time and effort on a daily basis to maintain.

For starters, barbers and stylists are now required to clean and disinfect their entire station, sink, and bathroom, before and after each client. They must also continue to use freshly disinfected tools with each new appointment, making sure to continually clean and disinfect them throughout the day, including washing brushes in soap and water. And following state guidelines, everyone inside the salon must wear masks at all times.

“Right now, it is taking most stylists twice the time to service half the amount of clients,” says DiLeva.

Social distancing is also required, which means many salons had to figure out ways to maximize their floor space while also trying to keep as many stations in operation as possible. To keep the number of people in the salon to a minimum, clients are asked to call the salon when they arrive in the parking lot to make sure it’s safe to come in. Clients are also not allowed to bring any extra people, including children and pets.

“We have always taken pride in having a clean, safe workplace, so that is nothing new,” says DiLeva. “However, we put a great deal of effort into making our salon even safer. It did take more work and adjustments to do so with the new guidelines. We are taking temperatures at the door, masks are required by all, [and] waivers and logs are signed upon entry.”

“It’s not too hard,” adds Car. “It just takes time to do all the protocol. We stagger clients also, so there’s not a lot of people in the salon, which makes it hard because customers have been waiting for over two months.”

THE HIGH-RISK FACTOR
One of the biggest issues facing salons as they reopen is how their senior clientele will respond. While people of all ages can be infected by COVID-19, older people and those with pre-existing medical conditions are at a higher risk to become severely ill if contracting the virus. The last thing any salon wants to be responsible for is getting any of their clients sick, especially their seniors. This is why most salons are going above and beyond to make their workspaces extra safe in order for their clients to feel comfortable returning.

“We’ve tried hard to [follow] all the guidelines,” says Car, who wears a plastic face shield when she’s working. “So, keeping with that, [I’ve had] no negative feedback. Seems like everyone is happy we’re open.”

“Most [seniors] are at ease with returning,” adds DiLeva, “but there are a few with current health issues that have some concerns about venturing out in general.”

We’re a month into Phase III, and a new sense of normalcy seems to be settling in San Pedro. Masks are now required for anyone venturing outside their house. Restaurants are now allowing dine-in guests. Gyms and hair salons are reopening. Barring any new spikes in coronavirus cases (or a second wave in the fall), the worst of the pandemic (knock on wood) seems to be in the rearview mirror.

“I know that the future is bright, that we’re a persevering community,” says Wilson. “We’re not going to let this ruin us. Yeah, it’s going to hurt us, and yes, we’re going to have to band together as a community to take care of each other and grow back to where we are in a prosperous position. I think at the same time, I’m so confident that that’s who this community is. I believe in us. That’s why we opened up here, because we believe that this community is a fighting community. That’s how we feel about it.” spt