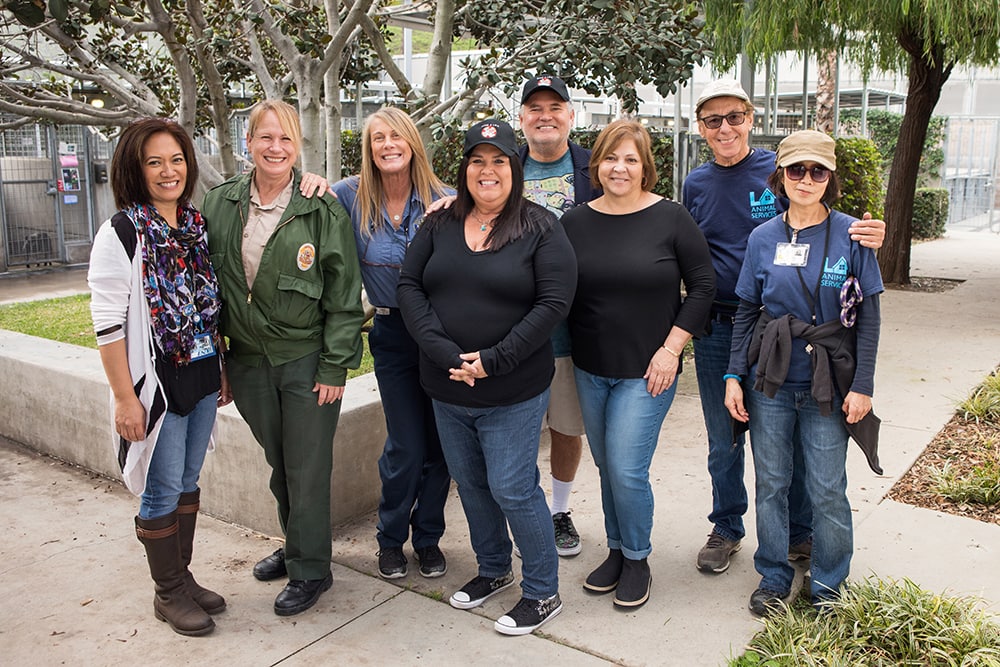 Why weren’t the cooling misters turning on?

That’s what was racing through Theresa Sardisco’s mind as she helped wrangle a group of reporters and local dignitaries, including then L.A. City Councilwoman Janice Hahn, towards the entrance of the newly reopened and renovated Harbor Animal Shelter on N. Gaffey Street. It was an unusually hot day in the summer of 2009, and the cooling misters, which should’ve automatically turned on with the heat, were dormant, and some of the dogs in the kennel were showing signs of heat exhaustion.

“All the animal shelters [are supposed to] have misters to keep the animals cool,” explains Sardisco, of family-owned Domenick’s Pasta & Pizza, which has been in San Pedro for 40 years. “When it’s 85 degrees, they’re supposed to kick on. Well, at Harbor Animal Shelter on the day of the re-opening, it was incredibly hot. I’m like, ‘Why aren’t the misters kicking on?’ Then someone tells me that since we were so close to the ocean, [the City] thought the shelter didn’t need them, so they never installed them. I started having a bit of a panic attack.”

Sardisco, who was only a volunteer at the time but was a strong and vocal proponent of the shelter, quickly took charge and gathered a group to cool down the dogs in the kennel with hoses while the media and politicos waited. It was then she realized that, while the renovated facility was a good start, the City could only supply the shelter with the bare minimum, making it nearly impossible to function properly (the mister snafu being a prime example). She knew that in order for the shelter animals to receive proper care, there needed to be a nonprofit organization dedicated to raising funds to supply the shelter with what the City can’t (or won’t) provide.

“I figured the City wouldn’t solve the misting problem on their own, so I immediately started fundraising,” she says. “In about three weeks, we raised $10,000 for a misting system.” 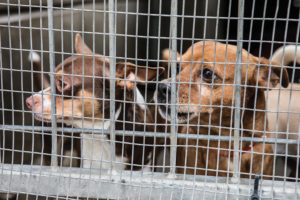 The successful fundraising turned out to be an even bigger blessing in disguise. The City quickly addressed the cooling issue and got approval to install a new misting system using $30,000 in bond funds, freeing up the $10,000 raised to go towards other important needs for the shelter.

“We were still in negotiations to see if this bond money was going to pay for it,” remembers Sardisco. “I didn’t cash anybody’s checks. I told everybody to write me a check and just make it out to my name because I didn’t have [the nonprofit set up] yet. After they received the bond money, I called every single person who donated and told them I had great news and bad news. The great news is the bond money is going to pay for the misters. The bad news is the shelter still needed funds.”

She continues, “The City’s idea of essentials is food, water, and someone to process the paperwork. That’s it. They don’t purchase blankets or towels, they don’t purchase sheets or medication. The shelter didn’t have leashes, or harnesses, or any grooming supplies. They had nothing. Every single person said it was okay for me to cash their check.”

And that’s how Pedro Pet Pals was born.

THE RESCUE LIFE
“I don’t think I chose it; I think it chose me,” Sardisco says, regarding her pet rescue endeavors.

For more than a decade, Pedro Pet Pals has been supporting homeless animals across the South Bay. Run by Sardisco and a passionate group of volunteers, the funds donated to the nonprofit have been used to purchase blood and anesthesia machines, kennel beds, leashes and harnesses, toys, canine/feline health supplies, and other necessities for area shelters. Pedro Pet Pals volunteers visit the shelter on a regular basis to help walk dogs or donate needed supplies they’ve collected. The organization even helps subsidize adoptions, medical procedures, spay and neuter surgeries, vaccinations, and microchips for those with financial limitations.

“I’ve known Theresa for 13 years; she’s an angel,” says Leslie Pizzati, kennel supervisor at Harbor Animal Shelter. “She gets us anything we need – collars, leashes, any kind of grooming supplies, even roofing for the shelters. She’s helped maintain our volunteer program. She’s done a lot for us. She advocates strongly for our department.”

Forming a nonprofit to help save the lives of homeless animals seemed to be a natural progression for Sardisco. Ever since she was a child, the 52-year-old restauranteur has had a unique relationship with animals. Prior to founding Pedro Pet Pals, she did bulldog rescues for 20 years. In addition to dogs and cats, she’s had a pet possum “that wore t-shirts and walked on a harness,” ferrets, and turtles. She even has a 25-year-old female parrot named Quack-Quack that “loves men.”

“She’s a hussy,” laughs Sardisco. “She loves men. She goes, ‘Hello, hello.’ I feed and clean her every day. She calls for me, we talk.”

She adds, “My whole life, I don’t know how, but animals have found me.”

MORE STRAYS, LESS KILLS
According to Sardisco, Pedro Pet Pals has found homes for thousands of shelter animals during the past decade. Unfortunately, even with their help, the number of homeless animals continues to rise in the Harbor Area.

As of November 2019, Harbor Animal Shelter has taken in 4,779 cats and dogs, with another month to go – a number that’s significantly higher than 2018 (4,451) and 2017 (4,402). While you can find many different breeds on any given day, the shelter consistently houses a large number of pit bulls (technically referred to as “mixed-breed”), a breed that has become harder to find homes for due to their less-than-stellar reputation.

“Getting harder-to-adopt animals exposure is one of our biggest challenges,” says Pizzati. “We have a lot of pit bulls here, and we’re constantly trying to educate the public to look at the personality of the animal and not just the breed.” She also notes that many times, animals will act differently while they’re in the kennel due to fear and trauma than they would in a more loving, home environment.

While the intake numbers have continued to rise (as of Dec. 20, there were 107 dogs, 58 cats, 31 rabbits, and five slider turtles at Harbor Animal Shelter), the euthanizing of shelter animals has continued to decline.

“When I first started, they were euthanizing 20 to 40 dogs a day,” recalls Pizzati. “Today, maybe six, 10 at most. But realize, these are animals that have proven to be dangerous for a variety of reasons. It would be a liability if we adopted them out. We do not euthanize just for time and space anymore. While no one wants to euthanize animals, I would say it has gotten 75 percent better.” 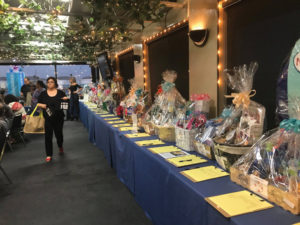 DOLLAR IN, DOLLAR OUT
Pedro Pet Pals spends anywhere between $3,000 to $5,000 a month on shelter animal needs, with funds coming directly from donations and fundraising events.

“That was another thing that pushed me into founding Pedro Pet Pals, because the funds that come directly to us go straight to the shelter and the community. It’s not hoarded and used for wages or whatever. No one is making money off this; we’re all volunteers. My books are transparent. We donate 100 percent to our cause.”

One interesting difference between Pedro Pet Pals and other traditional nonprofits is that they do not actively solicit donations from local businesses. As a small business owner, Sardisco knows what it’s like to constantly be asked to contribute to local charities. “I don’t just go asking people for money or donations,” she says, “because I know how it is.”

Instead, she’s cultivated her fundraising through organizing large group events, like Bingo nights, that have gained a reputation for being fun and “boozy,” and auctioning off large, ornate gift baskets filled with everything from premium alcohol and sports memorabilia, to luxury items and experiences, all donated by Pedro Pet Pals supporters.

“If it wasn’t for the gift baskets, we couldn’t raise the money we do,” says Sardisco. “Nobody comes close to our baskets.”

The organization holds anywhere from six to eight events a year, with the help of some major sponsorships.

“We are so lucky to have such strong support from our partners,” she says. “I’m not ashamed of any help. If you make toilet scrubbers and you want to donate some, I’ll make it work. We could make a cute gift basket out of that.” 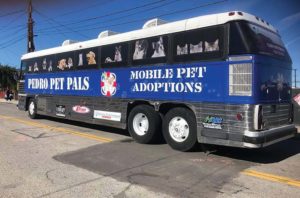 GOIN’ MOBILE
About three years ago, Sardisco was gifted a 35-foot-long diesel engine bus that she wanted to convert into what would become the only bus used for L.A. City shelter animals for mobile pet adoptions.

“The DeLucas (of J. DeLuca Fish Co.) gave it to us,” she says. “They used to use it to drive their employees from DeLuca Fish to Terminal Island. It didn’t have a lot of miles on it.”

Unfortunately, after raising $100,000 to refurbish the bus (“My friends from Carson Trailer did it at cost for us,” she says), Sardisco was hit with a notice from the State of California stating that any diesel engine built in 2011 or before had to be replaced, which meant a replacement cost of $35,000.

“We’re trying to get exempt since we’re local and drive less than 1,000 miles a year, but they’re working on it,” she says. “We can’t register it right now.”

Sardisco hopes to get the bus back on the road in 2020.

LAW ENFORCEMENT
These days, it’s tough for Sardisco to visit the shelter. She doesn’t spend as much time on site as she used to, knowing her time is limited between running the restaurant and figuring out who needs what and how to raise money or find suppliers. She admits, seeing the stray animals still takes a toll on her.

“It’s no good for me [to be at the shelter],” she says. “I just have a weakness there because every dog I see, I want to clean them up and take them home. Like the dog I held [for the cover photo], he was so scared. It just gets to me.”

(Editor’s note: The dog featured on the cover is named Chico and was surrendered to the shelter by his previous owner with another small dog named Six. They’re a bonded pair and currently available for adoption at Harbor Animal Shelter. And yes, they’re both adorable.)

This year, Sardisco is turning her focus toward domestic violence and its correlation with animal abuse.

“One of my goals has been to make sure that L.A. City and County start getting serious about enforcing animal cruelty laws. That’s my next goal in 2020,” she says. “People are starting to see the relationship between domestic violence and animal cruelty. It’s a whole other thing that needs to be addressed.”

Sardisco also sees herself taking on a more prominent position in the future, revealing she would love to be appointed as general manager of Los Angeles Animal Services after current GM Brenda F. Barnette retires.

“Brenda has been great,” says Sardisco. “We have a really good relationship.”

It’s an idea that’s been floating in her head for a while, and given her success with Pedro Pet Pals and her reputation within the industry of delivering on her promises and problem solving, it could be the natural next step in a life that’s been dedicated to the welfare of our furry companions.

“It’s an everyday job, and it takes a village to make this all happen. I am by no means alone in this,” says Sardisco. “From our supporters to volunteers, to people that come to our events, we all make this happen together.”

She continues, “These animals wind up in shelters because nobody can take care of them. They’re loving and good animals who just need good homes. I mean, to me, pets are family. What are you going to do?” spt