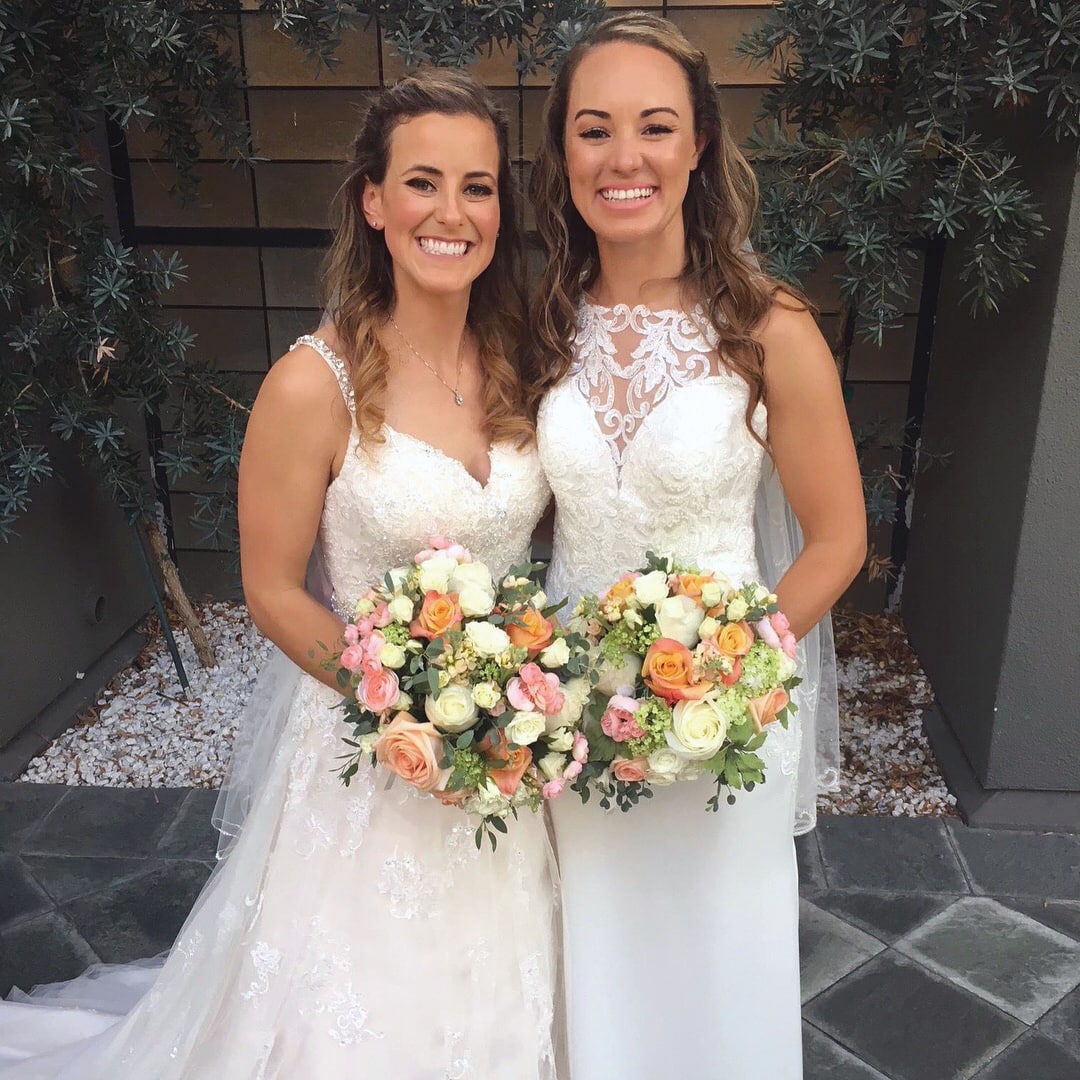 “Love is that can’t eat, can’t sleep, reach for the stars, over the fence, World Series kinda stuff.”
– It Takes Two

“There’s no one I’d rather go through life with than Ali,” says Kayleigh. “She embraces new things, and I really love that we bring out the best in each other.”

“Kayleigh is one of those people that can answer any trivia question and will likely get it correct,” describes Ali. “I love her witty attitude and her confidence when doing something that she loves, particularly when it comes to athletics.”

A shared love of softball initially connected the couple, as both played in high school, Ali at Mary Star of the Sea and Kayleigh at San Pedro High. Though familiar with one another through sports, they officially met in 2007. Through many MySpace messages (yes, MySpace was still a thing back then), the women immediately clicked and formed an instant bond. In 2009, they officially became a couple.

Ali and Kayleigh’s relationship is filled with many shared interests. Both ladies are big fans of the Los Angeles Dodgers, and love to root for the boys in blue, attending many home and away games, spring training, and even the World Series.

Being annual pass holders, Ali and Kayleigh also frequent Disneyland often, and recently made their first trip to Walt Disney World. Both ladies can also accurately recite lyrics from any Disney song at the drop of a hat. Seriously, it’s impressive.

Throughout their relationship, travel has helped create wonderful memories. “Vacations and adventures are kind of our thing,” says Kayleigh. “It has absolutely become a foundation in our relationship.” The pair have wine tasted in Oregon, adventured in Hawaii, cruised to Mexico, and visited eight MLB ballparks in the hopes of one day visiting all thirty.

A trip both Ali and Kayleigh will always remember is Ireland in 2017. Joined by friends, Jess and Ari, the nine-day vacation included plenty of picturesque moments. On day five, the group drove the Atlantic Highway to visit the breathtaking Cliffs of Moher. After finding a scenic grassy patch, they decided to take some photos. Seizing the moment, Ali got down on one knee and proposed. “Our friends were in on the surprise from the beginning,” recalls Ali. “Ari even took some photography lessons to prepare for the moment.”

On August 11, 2018, the couple officially tied the knot at Tustin Ranch Golf Club in Orange County, surrounded by the love of over 180 guests.

Their wedding day also featured very personal tributes to their loved ones, including Kayleigh’s mother, Linda. “I lost my mom to a rare disease called Scleroderma in 2013, so filling that void on the biggest day of my life was very challenging,” says Kayleigh. During the ceremony, a flower girl walked down the aisle with a photo of Linda and Kayleigh. “When you have the love and support of family and friends to help you through those tough times, you seem to get by one day at a time,” she adds.

Fun was everywhere at this party. The bridal party participated in an awesome lip-sync battle featuring ‘90s music. “It got pretty competitive,” recalls Ali. Guests were also treated to a chocolate fountain, late night bites, and favors of scented candles, each with a special Disney-related scent, including Dole Whip, churros, and Soarin’ Over California’s orange grove.

With a wonderful day full of special moments, Ali and Kayleigh cherish being able to celebrate their engagement and marriage with their bridesmaid and dear friend Ari, who sadly passed away due to ovarian cancer in September. “Having her alongside us during our ceremony was something we’ll forever be grateful for,” says Kayleigh.

The newlyweds enjoyed a 10-day honeymoon in Riviera Maya, Mexico, where they also celebrated Ali’s 30th birthday. Of course, their trip was jam-packed with excursions, including ziplining, exploring the ancient ruins, and swimming with whale sharks.

Recently, the couple has enjoyed settling into married life and celebrating their first Christmas together as wives. “We see ourselves continuing to go on new adventures and creating more memories,” says Kayleigh. Ali thoughtfully adds, “We want to continue to grow and learn together. When you work together as a team and respect each other, it makes life so much easier.”

Ali and Kayleigh currently reside in San Pedro. Ali works as a licensed physical therapist assistant and an injury prevention specialist, while Kayleigh is a dedicated nanny, as well as an ILWU casual.