Skip to content
Cover Stories
Open image in lightbox
A lion at the Warner Bros. Theatre, 1935 — one way to get people in the door! (photo: Grand Vision Foundation archives) 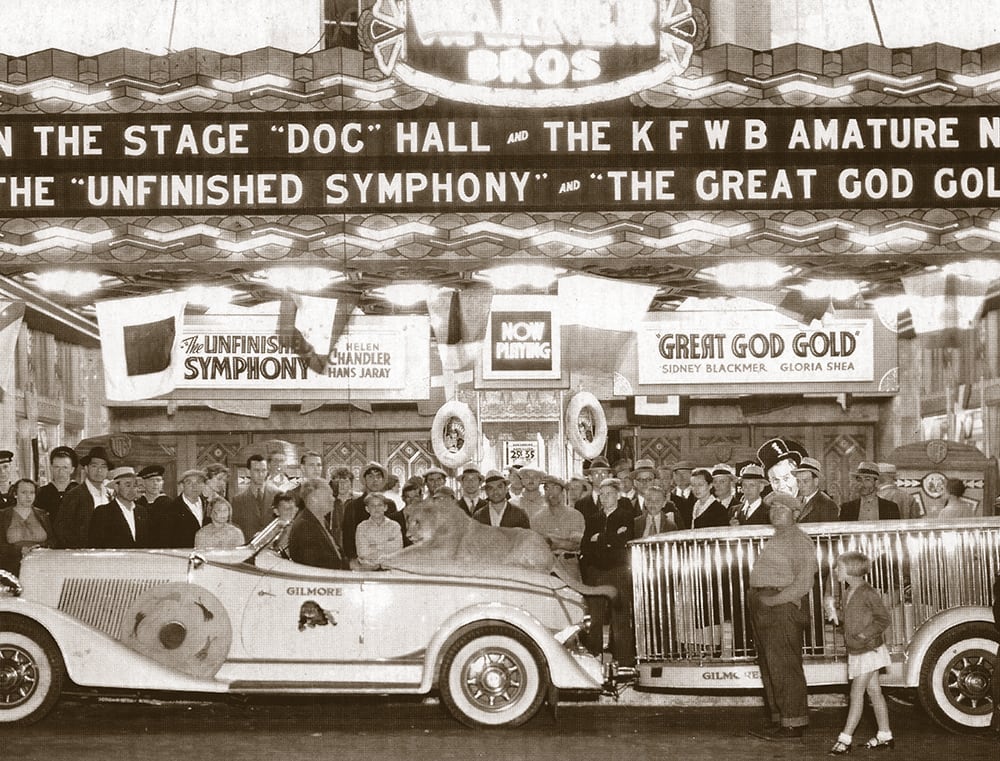 “It was a palace. Walking into the Warner Theater always made me feel like I was somehow walking on air,” Yolanda Valle Perry reminisces. Yolanda was born and raised in San Pedro and spent countless Saturday afternoons during her childhood at the Warner Grand, enjoying its grand surroundings. She remembers imagining the glamorous lives of the movie stars and escaping through the characters they played.

“What a time that was!” Yolanda remembers. “I was there mostly in the 1950s. There were so many theaters in town, the Fox Cabrillo, the Strand, the Globe, but by far, the Warner Brothers was the most dazzling.”

THE EARLY YEARS
In early 1929, Warner Bros., the famous Hollywood studio, announced that they would be building six suburban theaters in the Los Angeles area, including the Warner Bros. San Pedro. When the stock market crashed on a Black Tuesday later that year, the number of theaters was cut in half. Luckily, San Pedro still got its theater, along with Beverly Hills and Huntington Park.

The groundbreaking ceremony took place on June 18, 1930, with 14-year-old Jack Warner, Jr. tossing the first shovelful of dirt. Construction only took eight months, but with the country in the throes of the Great Depression, cuts had to be made — there was no organ console in the pit, no pipes in the organ chambers, the dressing rooms beneath the stage weren’t built out, and the second-floor offices above the storefronts never materialized. Despite the changes, the Warner Bros. San Pedro, decked out in “movie theater opulence,” opened to great fanfare with a star-studded celebration on January 20, 1931.

The theater survived the Great Depression under the helm of its first manager, Fred C. Crow. Warner Bros. handpicked Crow, a former chiropractor who was active in the Chamber of Commerce and known for his charm and charisma. When the Warner was threatened by low attendance, Crow got creative with marketing: He lowered admission prices, hosted celebrity appearances, held giveaways, and put on “screeno” nights (bingo in a movie theater); he even went as far as placing a mechanical fortune-telling doll in the lobby, which he personally assured was 100% accurate.

THE WWII ERA
Most movie theaters thrived during World War II. The war effort required long hours by tens of thousands of workers, and San Pedro was one of the cities answering the call loud and clear. All these war workers needed a diversion, so they flocked to theaters like the Warner. Plus, the newsreels that played along with every feature were the best way for Americans to see actual footage from the front lines. The Warner Bros. San Pedro also did its part by serving as a “Victory House” — a place where people could purchase war/victory bonds. There were even special movie showings where tickets would be given away with every victory bond purchased.

After WWII, the Paramount Consent Decree of 1948 dealt a major blow to the industry when it required all movie studios to divest themselves of their movie theaters. By 1952, half of all the movie theaters in the City of Los Angeles had closed. The following year, all the Warner Bros. properties were transferred to the Stanley Warner Corporation. San Pedro’s theater was safe, but without the backing of the whole Warner Bros. machine, it began a steady decline.

HARD TIMES FOR MOVIE PALACES
Warner’s biggest competitor, the Fox Cabrillo, met an even worse fate when it was demolished in 1958. The rise of the television era meant that the theaters now had to compete with millions of smaller screens. Times and tastes were changing, and in 1968, the Stanley Warner Corporation was purchased by Pacific Theaters. 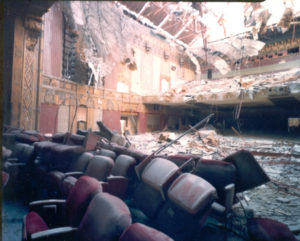 The early 1970s was a precarious time for historic buildings in San Pedro. Many in the downtown area had fallen into extreme disrepair. City leaders drew up the Beacon Street Redevelopment Zone, and an entire district with decades of history was marked for demolition.

By 1975, old Beacon Street would be leveled, along with the Globe Theater on 6th and Palos Verdes. The Warner Theatre hit an all-time low when it was sometimes occupied by adult film distributors or boarded up.

The late ’70s would also see the name Warner removed from the Warner marquee on 6th Street. Arnulfo Estrada, a Wilmington businessman, purchased the theater from Pacific Theaters in 1978 to show Spanish language films and renamed it Juarez Theater. He repainted the interior lobby in bright colors, recovered the seats in vinyl, and added a mural on the lower lobby ceiling that remains today.

Estrada soon handed over control to his sons. They started showing horror movies that appealed to a younger audience but sometimes attracted a dangerous element. Fights occasionally broke out, and one of the Estrada sons was stabbed.

BECOMING THE WARNER GRAND
In 1984, former Mann’s Chinese Theater manager Ray Howell purchased the theater from Estrada. In a 1984 News-Pilot article, he said that he was planning shows for kids and performing arts events to bring back the community. He reopened with Disney’s The Jungle Book.

He and his business partner Clay Colbert spent $100,000 upgrading the theater, painting over the colored walls and adding the painted gold filigree details in the stairwell and on the mezzanine lobby walls. 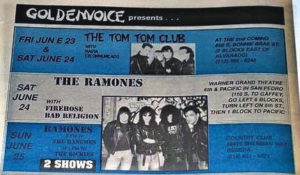 “The show at the Warner Grand on June 24, 1989, was a true standout. Following an excessively long mic check for Joey Ramone, the Ramones nearly leveled the Warner Grand with a wall of sound. To this day, that show remains the loudest concert I can ever recall! The crowd was ultra stoked to see local heroes — Firehose, L.A. legends Bad Religion, and the godfathers of punk, [the] Ramones.”
– Paul Miloe, area resident

Howell’s aim was to open the theater with a regular series of second-run films at affordable prices to compete with the first-run theaters in the area. His first act was to restore the Warner name to the marquee, naming it the Warner Grand Theatre.

When Howell’s business partner Clay left, another Ray — Ray Kaufman — came on board to be theater operations manager. Howell was a noticeably tall man, and the new Ray was not. For a time, “Big Ray” and “Little Ray” started to get things going at the Warner Grand.

Soon, they were showing classic movies and stage performances. They worked with local promoters to bring big names like Chaka Khan, magician Doug Henning, and the Ramones and rented the theater for movie shoots with top stars like Patrick Dempsey and John Turturro.

Despite these efforts, Howell was having a hard time making ends meet. After seven years with the best intentions, he closed the doors in November of 1989 and put the theater up for sale.

DO YOU KNOW WHAT I MEAN?
In 1991, Ray Howell sold the theater to one-hit-wonder musician and owner of the Killer Shrimp restaurants, Lee Michaels. Michaels’ song “Do You Know What I Mean” had filled the airwaves in the summer of 1971. Twenty years later, he was actually living in the Warner Grand. He and his girlfriend would use the 1,500-seat auditorium as their living room, watching movies from the front row while eating popcorn. Michaels entertained plans to create a dinner theater, but after five years, nothing came of it, and word got out that he needed to sell.

Soon, he was considering sales with different buyers who had no use for a theater and wanted to convert the building. He approached local property owner Gary Larson, who had just purchased the Arcade Building directly across the street from the theater, to see if he was interested in buying the Warner Grand.

BIRTH OF A GRAND VISION
Gary Larson felt he was in no position to buy the theater, but as chairman of the San Pedro Revitalization Corporation, he knew how important the Warner Grand was to the future of Downtown San Pedro.

“If the Warner Grand started up again as a functioning theater, it would draw people, but on the negative side, if something happened to it, it’d be a big black hole for downtown.” Larson continues, “The fear of the theater being sold to someone who would do irreparable damage led to the revival of the Friends of the Warner Grand.”

The Friends of the Warner Grand was formed back when Ray Howell owned the theater, but it quickly disbanded because it was tough to have a support group for a privately-owned, for-profit company.

The first person Larson approached about regrouping was fellow downtown property owner Alan Johnson, co-owner of Jerico Development. They worked together to figure out a possible solution for saving the Warner Grand. It was suggested that the reassembled group rebrand themselves for their new charge.

“Noramae Munster came up with the idea that we call ourselves Grand Vision Foundation,” explains Larson. “I thought it was a great name. It’s what we needed to imagine the future of the Warner Grand.”

The first part of the “grand vision” was to figure out a way to raise the $1.3 million asking price to buy the theater, but time was running out. 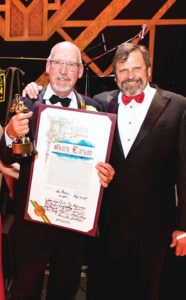 Larson was in constant contact with Lee Michaels. There were two parties very interested and ready to go into escrow — one to convert the theater into a storefront church and the other ready to gut the auditorium for swap meet space. Larson knew he needed to do something fast. Micheals gave him just 180 days to secure the funds.

After exhausting all other avenues, Larson and Johnson approached the newly-elected L.A. City Councilman and lifelong San Pedran, Rudy Svorinich, Jr. Councilman Svorinich had fond memories of the theater and, like Larson and Johnson, understood its economic importance, so he enlisted the help of the Community Redevelopment Agency (CRA) to secure the property for the City of L.A.

As the story goes, Rudy’s mother Winnie told him he had to save the theater. She and Rudy’s father had gone on their first date at the theater. She decided at the time that since Rudy Sr. had sprung for balcony seats, he was a good catch.

Flash forward to January 1996, without an hour to spare, Councilman Svorinich, the City of L.A., Gary Larson, Alan Johnson, and the other members of Grand Vision had made their vision a reality — the Warner Grand Theatre was saved.

The City of Los Angeles had purchased the property for $1.2 million with the express purpose of it serving as an anchor for the economic revitalization of Downtown San Pedro.

Today, the theater is the only one of the three movie palaces built by Warner Bros. in Los Angeles that’s still intact. When the City bought the theater, they assigned their Department of Cultural Affairs to operate it. With help from Grand Vision Foundation, it’s been a working film house and performing arts venue since that time. It is listed as a City of Los Angeles Historic Cultural Monument, and it is included on the National Register of Historic Places. But San Pedro’s Warner Grand is hardly a monument. It’s a living and breathing venue, a place for creating new experiences, opportunities, and memories for the current residents of San Pedro, Greater Los Angeles, and beyond. WGT