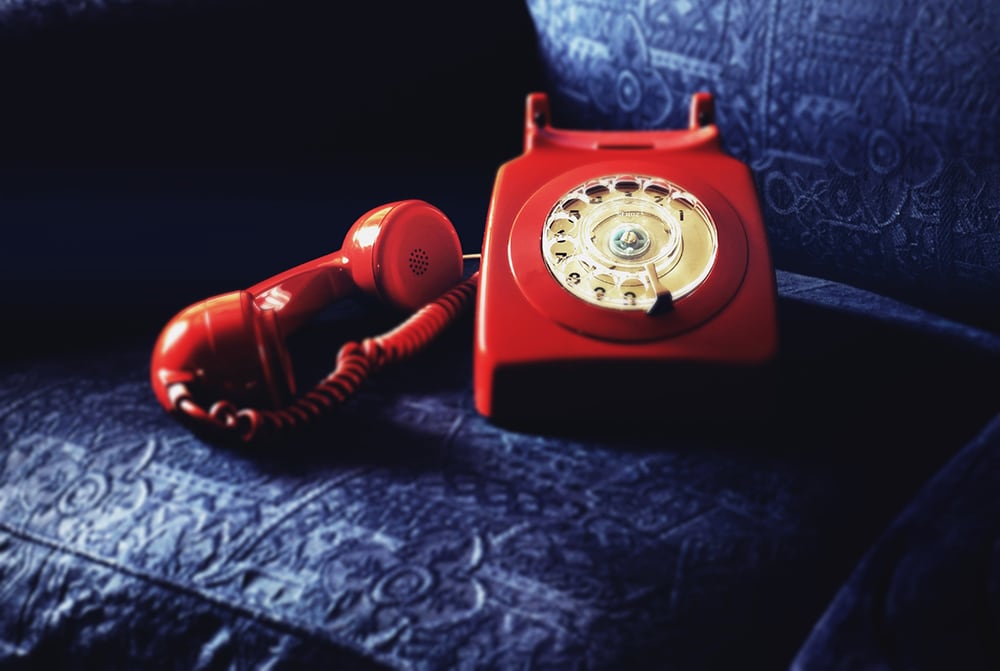 Operator, well could you help me place this call? –Jim Croce, 1972

Well, I’ve finally done it — I cut the cord.

I said goodbye to my telephone landline, one of the last vestiges of my ‘50s childhood. I saw the incinerator give way to the garbage disposal, galvanized trash cans supplanted by plastic, the clothesline replaced by a dryer, metal ice cube trays with icemakers, Sears and Roebuck catalog by Amazon, vinyl records by mp3s, my Smith Corona for a PC, car cigarette lighters by USB ports, Britannica by Wikipedia, yellow pages by Google.

Through it all, even though my wife and I both have had cell phones for years now, we kept the landline for… well, I’m not sure what for, since the last person who used it regularly was my mother, who died in 2018. Since then, about the only calls we were getting on our landline were the constantly annoying robocalls, and during the election campaign, the phone was ringing continually, at all hours. I don’t know why it took so long, but paying a monthly fee for something I was no longer using didn’t make much sense. To my surprise, however — and I’m sure many of you already know this — it turns out I save money by keeping my landline because it’s part of a bundle with the internet.

So, I still have the number, but I’ve unhooked all the old phones and put them away.

I may keep them around, mainly for historical value. Now in his 40s, my son hasn’t had a landline for years, and I know my granddaughters will never own one. Like so many other conveniences of long ago, they have become a quaint reminder of how
much our lives have changed in just a short period.

When it comes to phones, I’m so old. I remember when we didn’t need area codes because the population wasn’t large enough to need one. Regions just had prefixes (San Pedro’s was TE for Terminal) and five numbers. Of course, those were also the days when you still dialed zero (“dialed” refers to rotary phones, what they had before push buttons) to get an operator; called a person for information; dialed a recording to get the time; long-distance cost a small fortune; you even shared lines with other residents on “party lines.” For you whippersnappers out there, that meant that you’d pick up the phone to make a call, and another person would be on the phone talking to someone else. You were then supposed to hang up and wait for the line to be free.

Here and there, you’ll also still run into another relic of the past, a long-abandoned phone booth — you know, those things used by Superman and Dr. Who — and an occasional payphone on a wall near the restrooms, and you’ll have to explain to your millennial friend that you used to have to put coins into those things to make a call. And if you’re fortunate, one of those giant phone books will still be hanging beneath the phone with the white pages listing nearly everyone’s phone numbers in the area.

While I don’t miss the phone book per se, I do miss one old-fashioned element of using the phone: talking to a human being and not a recorded voice. Spending 10 minutes punching numbers to hear a live human — as I had to do when I went to cancel my landline — and then getting someone at a phone bank in India I can’t understand is not my idea of progress. It may make fiscal sense for the company, but like everything else, “customer service” has become an oxymoron.

So in a weird way, I’ve personally come full circle. More than 50 years ago, while at Dodson Junior High, Mr. Fazio, one of my all-time favorite teachers, nicknamed me Wireless, a nod to my sharing the same last name as the famed inventor of wireless radio. I used “From the Wireless” as a column name in college and into my professional journalism career, long before the term Wi-Fi became universal.

WHO KNEW?
It was a year ago, before COVID-19 and the lockdown, that I lamented in this space how awful 2019 had been for the local restaurant industry. Little did I know what lay ahead.

Even when times are good, running a restaurant is a risky business, but 2019 had been a particularly rough year. It is still too early to tell, but my guess is few eateries, especially the mom-and-pop variety, will survive the extended lockdown of 2020 that has continued into this year. Small-business owners and displaced employees have received government bailouts, but it will take years for them to recoup the lost income. Allowing outdoor dining to resume during the coldest period of the year is something of a bad joke, and eating outdoors in the summer heat sort of defeats the purpose. Air conditioning is a big incentive to eat out.

Some jobs may indeed be more essential than others, but putting food on the table for your family is essential for everyone. Let’s hope that by the time you’re reading this, the COVID-19 science will allow politicians, who have the least essential job of anyone, to open the doors for business in California. spt