Skip to content
Features
Open image in lightbox
Shaun Meadows holds a photo of his mother Maureen, who was the inspiration for opening his surf school. (photo: John Mattera Photography) 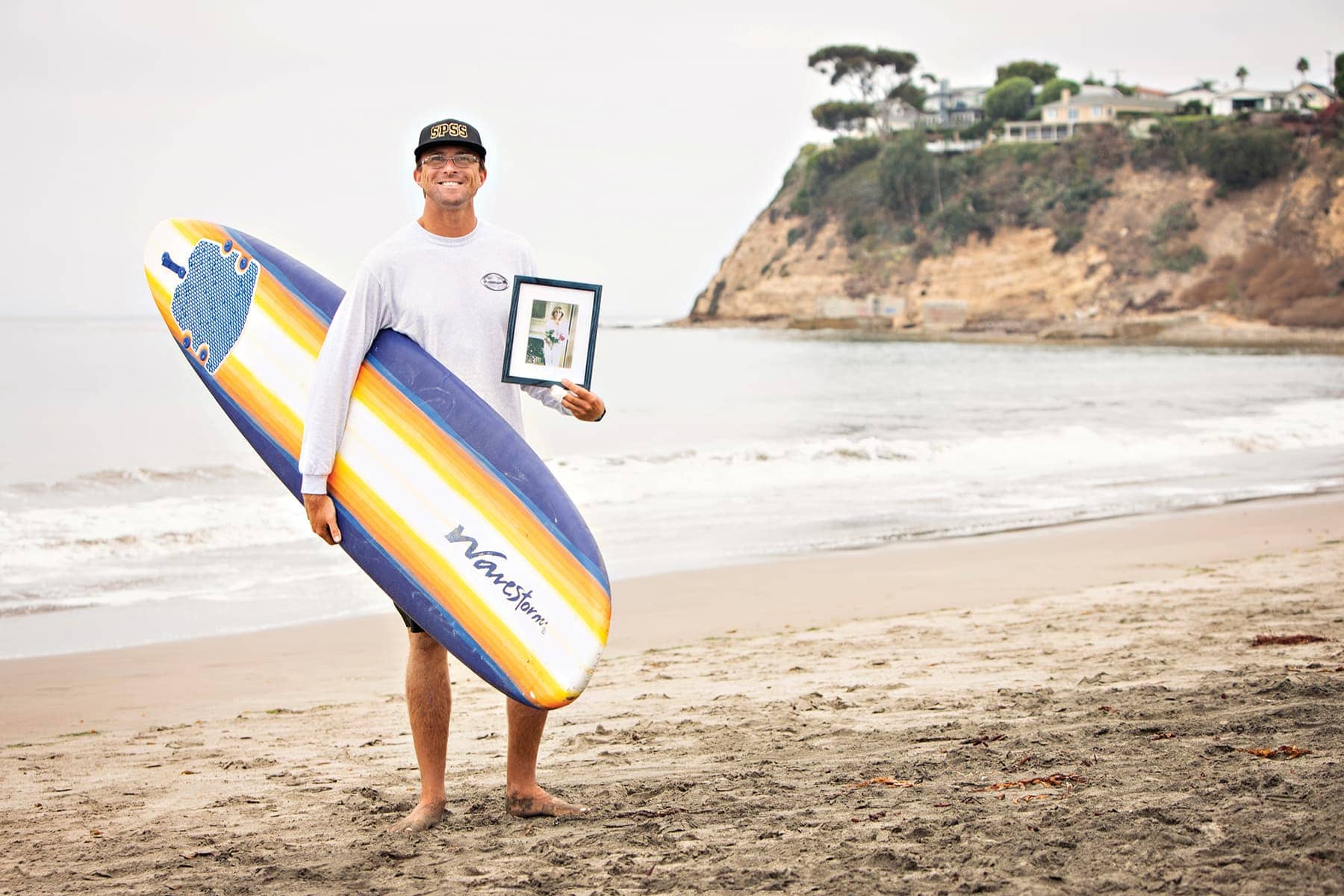 There has never been a better time to open a surf school in San Pedro.

With the pandemic, children are home, away from their friends and school, often staring at a screen all day. Families are traveling less, and local beaches are becoming more important than ever in the community as a respite in nature. Shaun Meadows wants to help create an interest in surfing (which he calls “surf stoke”) with San Pedro’s next generation and plant the surfing seed at a young age.  He opened San Pedro Surf School to encourage people to enjoy what San Pedro beaches have to offer.

Meadows, named after a surfer, grew up surfing at Cabrillo Beach and other local beaches. As a child, he would ride his bike to Cabrillo Beach and spend the day there as a junior lifeguard and a member of the San Pedro High School surf team. It was like his playground, and he describes Cabrillo Beach as a hidden gem of California.

Meadows spent 16 years working for Catalina Express in various positions and holds a captain’s license. His love for the ocean is something he shared with his mother, Maureen Meadows, who passed away suddenly this summer and was his main influence in starting a local surf school. Meadows wants to help bring surfing to the younger generation of San Pedro at Cabrillo Beach which has smaller waves that are ideal for beginner surfers.

“My mom was beautiful, inside and out; she was like a bright positive light,” states Meadows. “I wanted to do something that would be a positive light in the community, so I created San Pedro Surf School. I wanted to show my love of surfing and the love of my mom and tie it together.”

Many families who normally drive to Torrance Beach to take surfing lessons are now staying local at Cabrillo Beach since the opening of San Pedro Surf School. Often people end up spending the rest of the afternoon after surfing lessons creating a community that is bringing people together on the sand. Grandparents who used to surf locally are bringing their grandchildren to take lessons and bond over surfing.

“I used to surf at Palms, and Rocco, my grandson, is now learning, thanks to San Pedro Surf School,” says Rocco’s grandmother, Michelle. “Cabrillo Beach used to be crowded and the place to be when I was young, and now the younger families are coming back to bring their kids to learn to surf.”

“Local instructors are friends and family members so when we get to know these kids, it is a circle-of-life type of feeling that we are bringing to the water,” states Meadows. “The scenic views of the water at Cabrillo are beautiful.”

“My daughter absolutely loved the one-on-one attention during her hour-long surf lesson,” says Monica Sabic Weston. “We have beautiful surf right here in San Pedro, so when they started offering lessons, we could not jump fast enough to enroll our daughter.”

Meadows is offering affordable surf lessons, both private and group. His clients vary from ages 4 to 52 and include a father and daughter and couples on a date. Group lessons can be arranged to include friends and family.

Meadows has seen numerous signs of his mom at Cabrillo Beach, from sand dollars in the waves to the many dolphins that were his mom’s favorite. Meadows is respectful of the beach, and his surf instructors arrive on the beach early, clearing any trash. He has planned a community beach cleanup for November 1. On the weekends, he brings his mother’s photo to the beach with him as he continues to create his own legacy at the very beach where they shared so many special memories. spt