Want to see your event here? Email events@sanpedrotoday.com to place a listing. 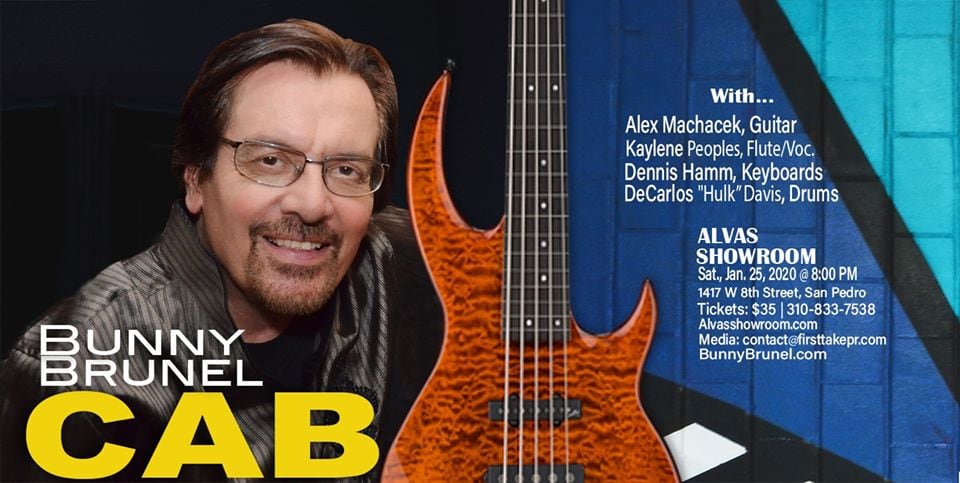 Internationally acclaimed Bunny Brunel is a two-time Grammy-nominated bassist who’s toured, performed, music directed, and recorded with some of the most iconic recording artists/musicians in the world, including Chick Corea, Herbie Hancock, Wayne Shorter, Jack DeJohnette, Al Jarreau, Stevie Wonder, Ziggy Marley, Gloria Estefan, and Natalie Cole. His performance skills and instrumental virtuosity are indescribable. Brunel has released 15 albums in his career, ranging from his first album TOUCH to his latest album BASS BALL, where both he and Stanley Clarke produced and performed on the historical CD that features renown bass players in the US and France. In his early 20s, while playing at the world-famous Ronnie Scott’s Club in London with Tania Maria, Yes/Moody Blues keyboardist Patrick Moraz introduced Bunny to fusion keyboardist Chick Corea. A few months after Chick heard Bunny play, he hired him to record on his album SECRET AGENT (Brunel’s first Grammy nomination). Bunny played with Chick Corea for almost nine years and has since been in bands with Tony Williams, Larry Coryell and Alfonse Mouzon; and Brian Auger, Patrice Rushen, and Dennis Chambers.

In 2000, Bunny released CAB from the newly formed band of the same name as he and co-founding members Tony MacAlpine and Dennis Chambers gave a whole new spin to fusion. With Bunny’s melodic flair on the bass, as well as his unmatched dexterous playing and “wow” factor, this band earned Brunel his second Grammy-nomination from his album CAB 2! As the leader of CAB, Bunny Brunel has continued to blow his listeners away both during live performances and with his powerfully produced albums as both CAB and (as the artist) Bunny Brunel. At the top of the fusion food chain, he continues his legacy as one of the four founding fathers of the bass fusion movement—an exclusive title Bunny holds with Stanley Clarke, Jeff Berlin, and fellow fretless player Jaco
Pastorius.

A melodic writer, Brunel creates memorable melodic overtones with modal changes that transcend most recordings from the fusion genre. As complex as his music is, you walk away humming his melodies. But you are cheating yourself if you haven’t seen him perform. Experiencing him in concert is transformative. Nothing compares to drinking in a performance by this masterful bass sorcerer!