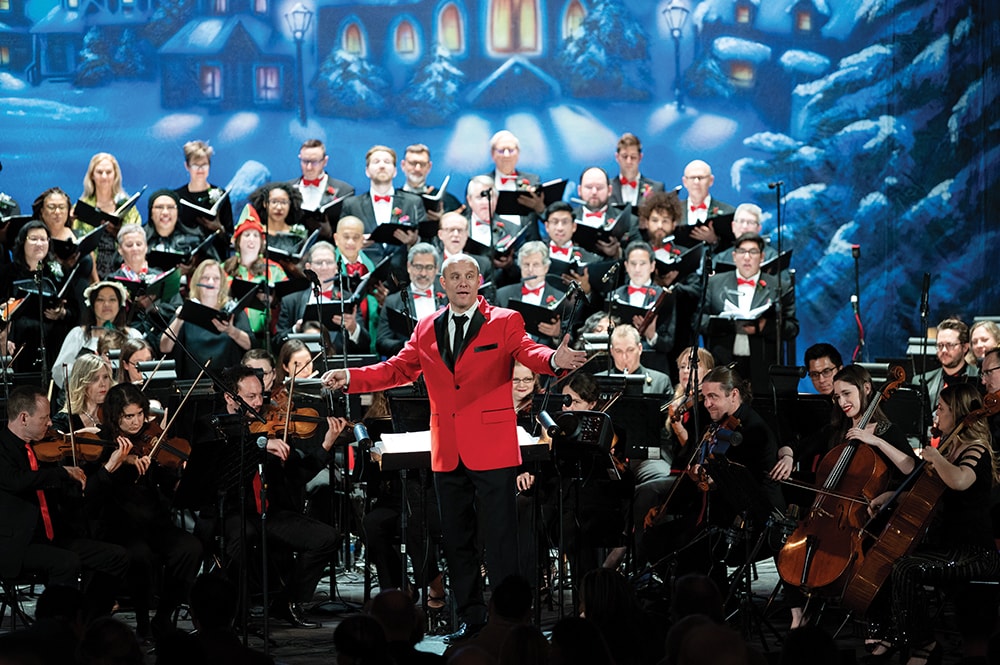 How many days does it take for the world’s best musicians to put together a holiday concert? That’s not the setup for a joke, although the answer is practically a punchline: just two. Maestro Steven Allen Fox and the Golden State Pops Orchestra and Chorale are gearing up for a triumphant return to the stage with their annual “Holiday POPS Spectacular,” and they are waiting until the last minute to finalize the songs on their setlist, keeping the show full of surprises. “When you have an orchestra that is comprised of very high-level musicians,” Fox explains, “in one rehearsal and a dress rehearsal, you’re ready to go.”

Fox, who founded the Golden State Pops Orchestra and Chorale in 2002, has been its conductor for nearly 20 years, and the Holiday POPS Spectacular is the orchestra’s annual holiday tradition. This year’s show, the group’s first since COVID-19 began, is a healthy mix of novelty and ritual. Like years past, the orchestra and chorale will perform film and media music with selections from Home Alone, Elf, and Christmas classics on the setlist. The concert will still take place at the Warner Grand in San Pedro, the orchestra’s home stage since 2004.

Yet audiences can expect plenty of new additions. Fox and arranger Victor Pesavento, who collaborated on the setlist and are long-time friends, enjoy adding unique elements to each performance. Framed by the pandemic, the tone of this year’s concert will be introspective and meaningful, with beauty as an unofficial theme.

On the setlist are two world premieres, songs that have never been played for a live audience. “I’ve always wanted to present Elf as [a musical suite with narration], and this year came the opportunity,” enthuses Fox. The new arrangement from Elf, titled How Buddy the Elf Saved Christmas, will feature Bill Rogers, the “Voice of Disneyland,” narrating the story of Elf over music from the movie. The concert will also premiere the suite from Jingle Jangle: A Christmas Journey. Writer and director David Talbert, who worked on the film for nearly 20 years, will discuss his work with the audience before the premiere.

There may also be another, less musical, surprise: snow. “When people leave the concert hall after our performance for the holidays, there’s this running joke that there may be snow in San Pedro,” Fox teases, speaking about past holiday performances at the Warner Grand. “Let’s just say this year there really might be snow!”

Like the show, the orchestra itself has changed since it last performed live. The Golden State Pops Orchestra now operates under the umbrella of the nonprofit Entertainment in Music Association, an organization Fox and the orchestra’s board of directors helped create. Fox says that the change from orchestra to association is strategic, allowing the group to expand to launch new ensembles, collaborate with other organizations, and create music festivals. “It’s just going to open the doors for us to become a lot more active and involved in the music industry in ways that, as an orchestra by itself, just wouldn’t be possible.”

In anticipation of the upcoming concert, Fox and the Pops have ample safety precautions in place to combat the spread of COVID-19. The chorale will reduce its number of singers, and every volunteer, worker, and performer in the orchestra and chorale will be vaccinated. Unlike previous years’ shows, there will be no cash sales or will-call at the venue — guests will either purchase tickets ahead of time online and print out hard copies of their tickets at home or use credit-card-only kiosks at the Warner Grand the night of the show. “Our first priority is everybody’s safety,” reassures Fox, “and we want to limit contact points as much as we can.”

In addition, the Warner Grand Theatre will abide by county guidelines, which mandate that patrons wear masks unless eating or drinking and that all guests over the age of 12 bring either proof of vaccination or a negative test taken within 72 hours. Attendees over the age of 18 must also bring a photo ID that matches the name on the vaccination card or their negative test results.

When asked what most excites him about returning to live performances, Fox’s answer is simple: He can’t wait to take those first steps on stage. “The conductor walking out — that’s the moment when it hits everybody. We are here doing this. We made it through something.” And to do it on the Warner Grand stage? “The Warner Grand has been our home since 2004. It’s really going to feel like a homecoming.” spt

The Holiday POPS Spectacular will take place on December 18 at the Warner Grand Theatre. For tickets and information, visit gspo.com or follow the Golden State Pops on Facebook and Instagram at @goldenstatepops.